One of our readers has send us this image of Le Grand Blue, taken in Rostock in North East Germany. Although not confirmed yet, we believe the 112 metre superyacht might be underway to the Tamsen yard, for a refit. The Hamburg businessman Heiner Tamsen took over the insolvent SMG Werft earlier this year, and has lead the shipyard into a new era for shipbuilding and services. 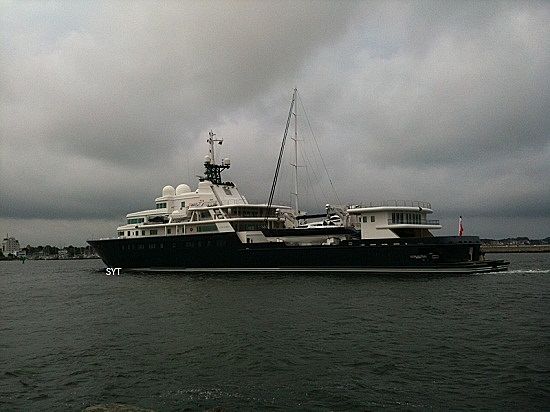 The 112m Le Grand Blue was built in Germany in 2000 under the supervision of the late Claus Kusch. She was originally build for an American owner, but in 2002 she was sold. Following her sale the yacht was lengthened 16ft and Bannenberg & Rowell Design was redesigned parts of her interior. She features some of the largest tenders ever carried on board a superyacht, which included at one point a 74 foot sailing yacht, and a 67 foot Sunseeker.