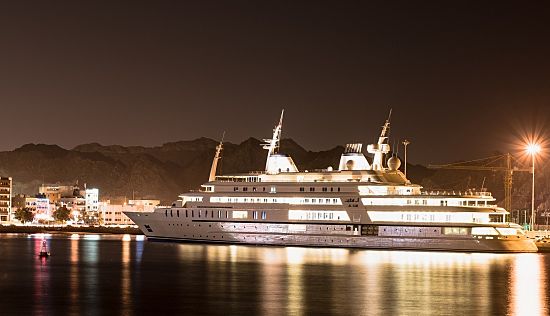 Captured here in her home berth in Muscat, Oman just last week, is the enormous 155 metre superyacht Al Said. Built by Lürssen in Germany under the project name Sunflower, Al Said was delivered in 2008 to her owner, the ruler of Oman. Currently listed as the 4th largest yacht in the world, it is interesting that Al Said is in fact far larger than the three yachts which surpass her in length, with a total volume of 15,850 tons. She is also one of the most powerful yachts in the fleet, with a total of 16,399 kilowatts. The yacht's exterior is designed by Espen Oeino, with an interior by Redman Whiteley Dixon. The previous Al Said is a 103 metre superyacht, built in Italy in 1982. That yacht has since been terminated in her service to the Omani Royal family, and is now named Loaloat Al Behar.