Offering the amenity of many motor yachts combined with the thrill and exhilaration of a large sailing yacht the Royal Huisman 180’ Flybridge Concept is a remarkable bridge between these two worlds. Designed to serve the needs of a new generation of yachtsmen, the Royal Huisman 180’ Flybridge Concept focuses design attention on energy efficient yachting in a lavish cocoon of luxury afloat. Teamed with Andrew Winch Designs, naval architect and designer Philippe Briand challenged the concept further by adding high performance and a bold, modern exterior design to the equation. 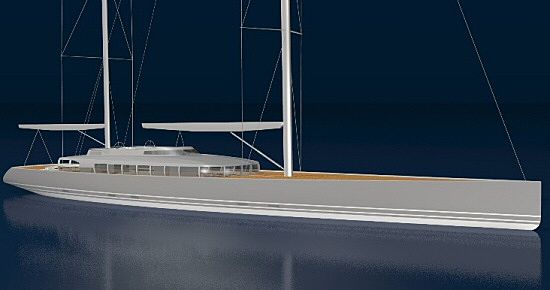 Drawing on his immense experience of designing grand prix record breakers such as the trans-atlantic record holder Mari-Cha IV, Briand’s refreshing approach has produced a set of hull lines that offer a moderate displacement high performance hull form complemented by a high aspect ketch rig sail plan that maximizes the air draft of the Panama Canal bridge for convenient trans-ocean passage making. And what the eye does not see is Philippe’s particular attention to an underbody that reduces drag to a minimum with fine carbon fiber appendages that reduce wetted surface areas and optimize performance.

The hull’s beam waterline is narrow to reduce frictional and wave resistance. The beam at deck level generously considers interior designer Andrew Winch’s wide glass rimmed deck saloon and with this wide flare between the beam at waterline and the beam at deck level, the thrill and excitement of powerful upwind sailing has been emphasized. The Royal Huisman 180’ Concept Flybridge is truly as fast as she looks. But speed does not compromise comfort as her low wetted surface area will slip through the water rather than bounce over it. And for lift and lateral stability her bulb keel fin and rudder cord have been optimized resulting from the success of Mari-Cha IV. 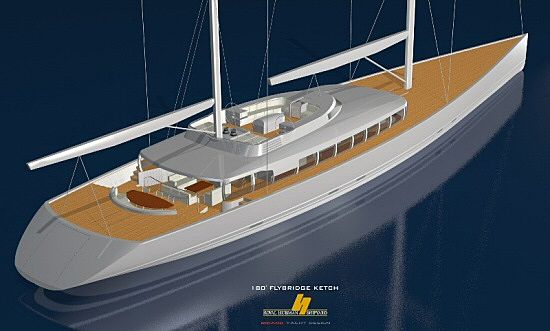 At all points of sail, upwind or downwind, the design focuses on speed and comfort with an easily driven hull form. A great deal of attention was paid to aesthetics, as well as to transparency. It is indispensable that guests can experience the thrill of the sail even from the protection of the aft cockpit. Fitted with two long windows that can be dimmed from transparent to opaque, the experience, literally controllable, is but a button away.

Just as nature prefers almond shaped eyes to round ones, the design of the coach roof was highly dependent on an aesthetically pleasing balance between window height and length. 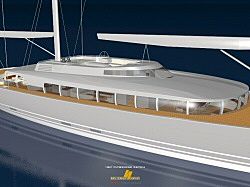 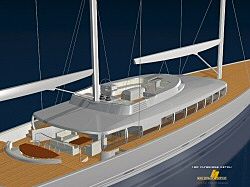 To obtain privacy and to consider the energy efficiency of the stylish vertical glass panels, the film dimmer system can be incorporated in the upper half of the windows. This cuts the windows visually in half, shielding the interior soft furnishings from the tarnishing effects of glaring sunlight whilst still affording a panoramic view over land and sea.

Strict attention has been paid to the sleek look across the deck surfaces. Long teak deck planking continues seamlessly through a minimum number of deck openings. Deck gear is concealed and kept to a minimum; free of sun, salt and the discerning eye. For ease of use, sail handling is automated and offers fast sail trimming assisted by two Magic Trim winches for the mainsheet. A non-overlapping Genoa is trimmed with reinforced drum winches and an all-weather staysail can easily be carried for long periods of offshore sailing. And with this level of automation and simplicity the Royal Huisman 180’ Flybridge Concept can be underway within minutes of hauling her anchor. For the interior styling and general arrangement the renowned office of Andrew Winch Designs has extended the vision for the Royal Huisman 180’ Flybridge Concept by creating an interior that embraces the generous contemporary floor plan of the design.

Andrew’s love of the sea is given full opportunity with the wrap around main deck windows. A forward facing ‘private’ dining room with en-suite service pantry adjoins an attached library and study, or starboard side cocktail bar.

The view from the dining room is of uninterrupted teak deck rising up to the arrowhead proportions of the fine Briand bow. A huge central lounge converts into a surround sound cinema, while three-dimensional access can be gained to the bridge and upper Flybridge, or down to the four private guest cabins that have been arranged to allow the professional crew private access without disturbance to the main living areas of the design. The expansive master bedroom with separate and private stairway has been designed with great flexibility in mind. Importantly the entire general arrangement, unlike other designs of this type, concentrates the main living amenity on the main deck for complete privacy from professional crew movements. Normally this highly valuable area is devoted to bridge controls and other navigational activities but in the case of the Briand design the fully functional bridge is located immediately adjacent to the Flybridge for privacy and direct communication of command related activities without disturbance to the guests. 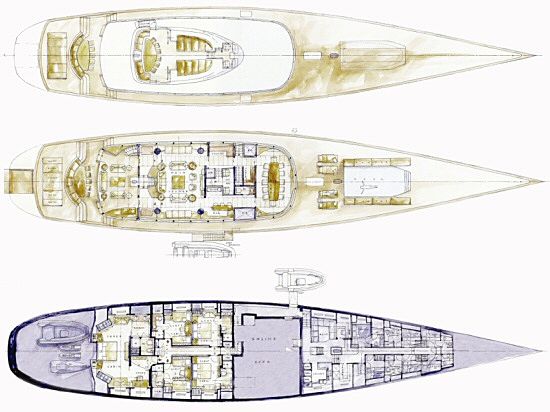 In Andrew Winch’s own words "the Royal Huisman 180’ Flybridge Concept is a space ship for the sea, fast and exhilarating to sail, architectural and individual to relax in. She will truly be a signature yacht for her new owner. Sailing or at anchor, all will be admiring her lines and wishing to have a look behind the mirror glass windows of her space age superstructure. Jewelers’ quality like details are a Huisman trademark, while beautifully built cabinetry in high gloss lacquer or fully grained wood will wrap around the main deck below the curvaceous vertical windows. She will be an architectural villa afloat.”