With 2022 nearly a wrap, SYT iQ has taken a look back at the sales figures for the year – and rather than comparing them to pre-pandemic levels, we’ve done a year-on-year comparison to 2021 – and the figures are surprising. 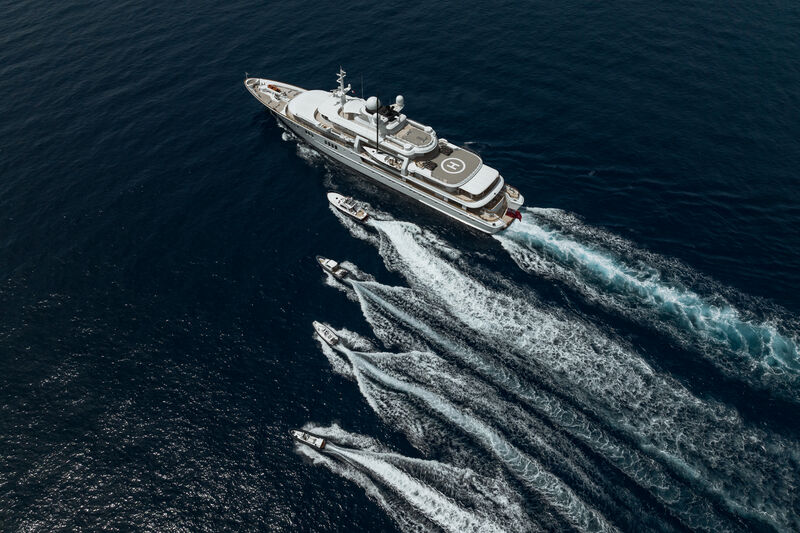 Straight off the bat, it needs to be noted that there were nearly 200 fewer transactions closed this year than there were during the pandemic-induced boom in 2021. Last year brokers all around the world sold 456 used motor yachts and 37 used sailing yachts of 30 metres or more – it wasn’t just a record-breaking year, it saw close to 200 yachts added onto the annual average. Taking a preliminary look at 2022, sales have rebalanced to the pre-pandemic average of 2020, 2019 and 2018. 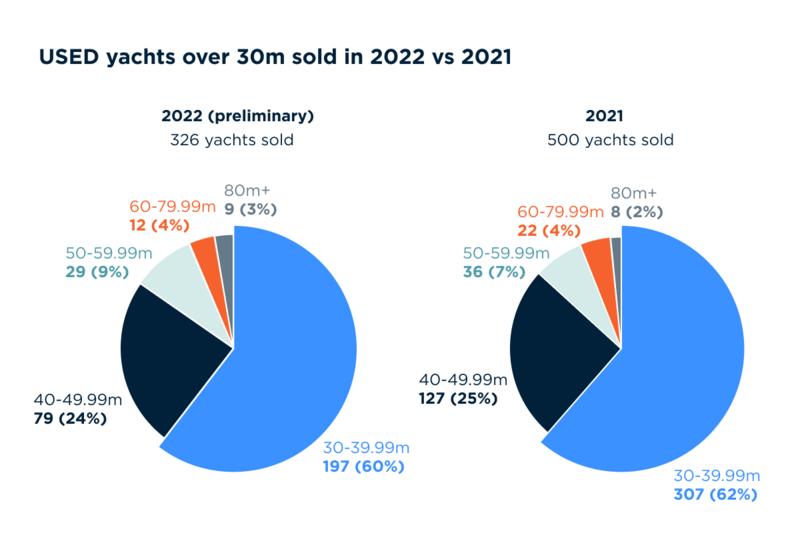 Thus far in 2022, more than 300 used yachts of 30 metres and longer have been sold; interestingly, the average last known asking price of the yachts sold this year surpassed 2021 by more than €2 million. So even though fewer yachts have been sold this year, on average the price of these used yachts is more expensive than in 2021, which might point to a further tightening of the brokerage market. Last year the average last asking price was just over €11 million for yachts, which has jumped to €13.1m this year. Notably, there was a significant 10 percent decrease in the amount of days yachts spent on the market this year. 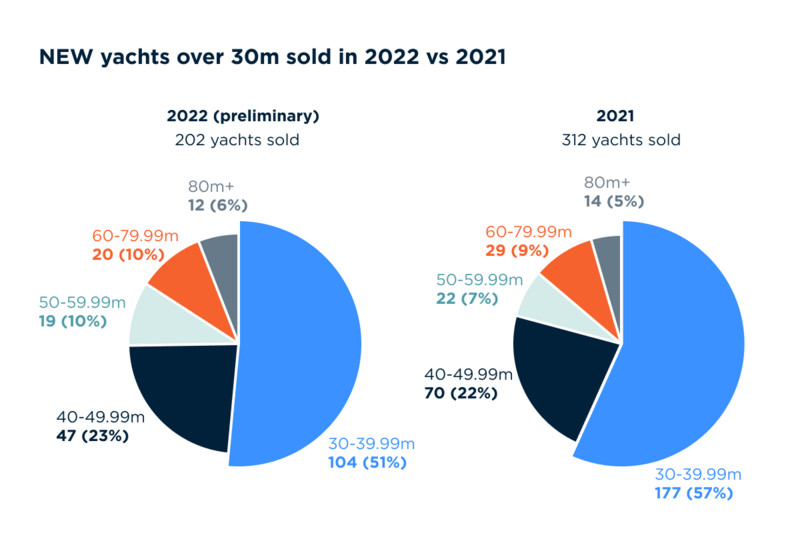 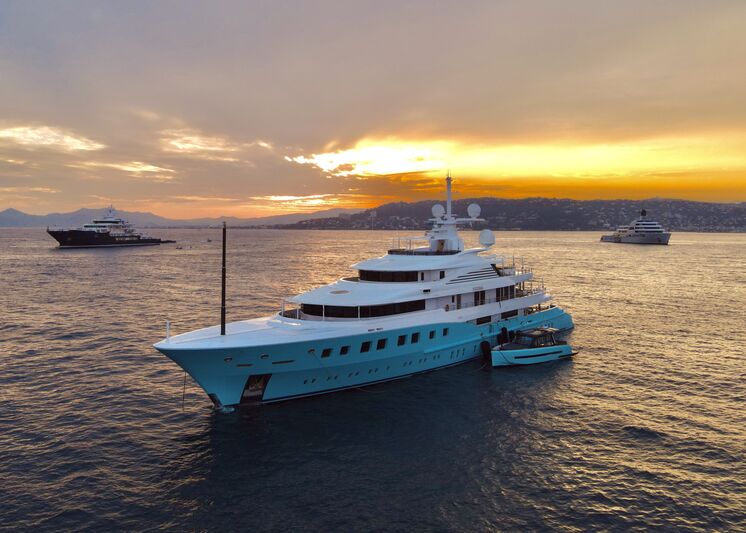 Photo: Léandre Loyseau / SuperYacht TimesWe also witnessed an unexpected sale this year, which was the result of the war in Ukraine and the subsequent blacklist placed on a collection of Russian oligarchs with direct links to the Kremlin. This sale was the 72-metre Dunya-built superyacht Axioma which sold at auction in Gibraltar for $37,500,000 in September. A number of other superyachts have been arrested around the world, which could still potentially be put under the hammer.

What differentiated Axioma from the other arrested Russian-owned superyachts is that her owner unlawfully took out a loan with JPMorgan Chase & Co as the sole shareholder of Pyrene Investments. As the yacht's owner was on the sanction list his assets were frozen and it was illegal for the bank to accept any repayments from him. With his superyacht Axioma seized in Gibraltar, JPMorgan Chase & Co. pursued an opportunity to see a return on their investment. 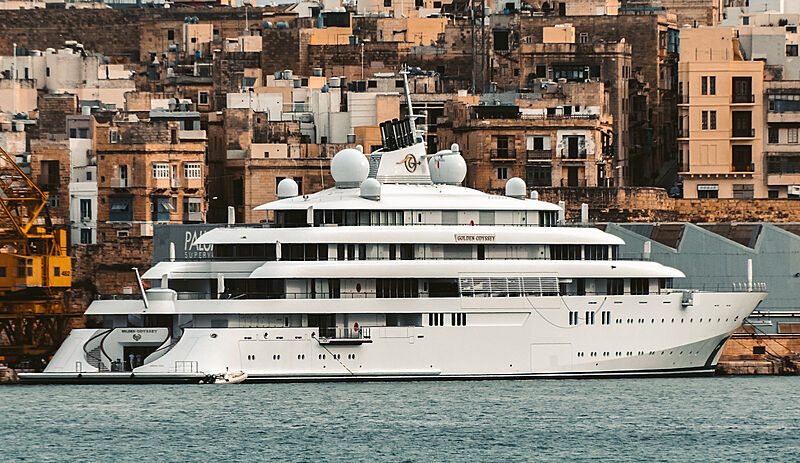 Lürssen’s 123.2-metre superyacht Golden Odyssey was sold in Malta last October. The sale of Golden Odyssey was forced by legislative action, following a number of missed loan repayments that resulted in her seizure. According to local reports, Justice Spiteri Bailey approved the private sale of the vessel for €150 million, but her last known asking price is unknown. This is the first time Golden Odyssey has been sold since commissioned. 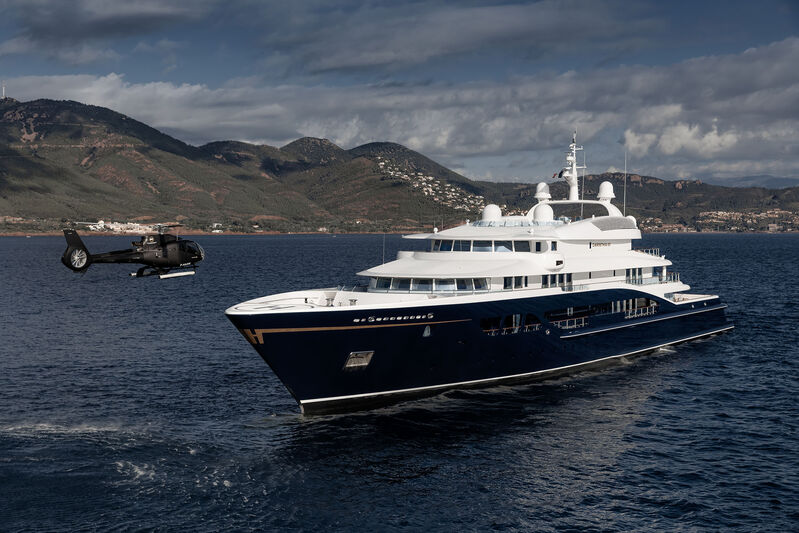 The 97.2-metre Lürssen superyacht Carinthia VII sold in a deal with Ralph de Joode of RYacht Management representing the buyer and Antoine Larricq and Stuart Larsen of Fraser acting as the seller’s representative. Carinthia VII was scheduled to be presented at the 2022 Monaco Yacht Show; however, the buyer accepted the yacht just two days before the event. Carinthia VII was commissioned by the Austrian philanthropist Heidi Horten and remained part of her estate for two decades. Her new owner has expressed interest in placing the Tim Heywood-designed superyacht on the charter market. 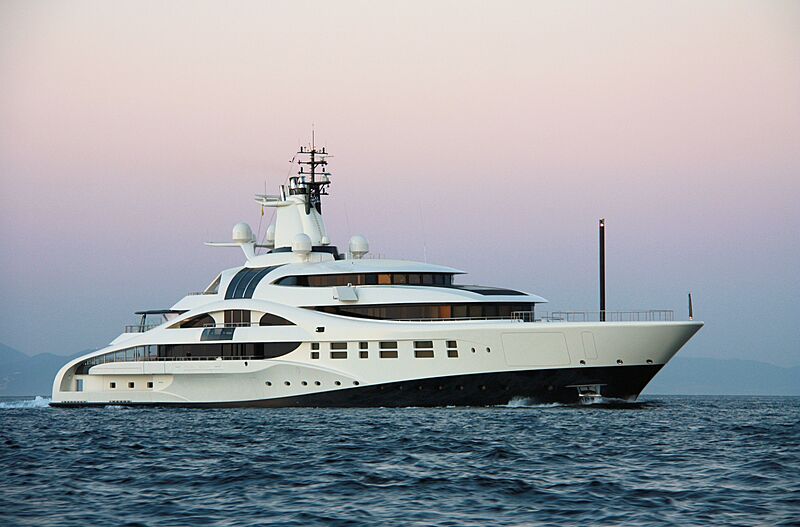 Blohm & Voss’ 95.15 superyacht AV (ex. Palladium) was sold in the midst of a glorious Mediterranean summer, after being listed on the market for less than a year. Until her sale, AV had enjoyed life with a single owner. Merle Wood & Associates introduced the buyer, while Richard Higgins of Northrop & Johnson represented the seller. 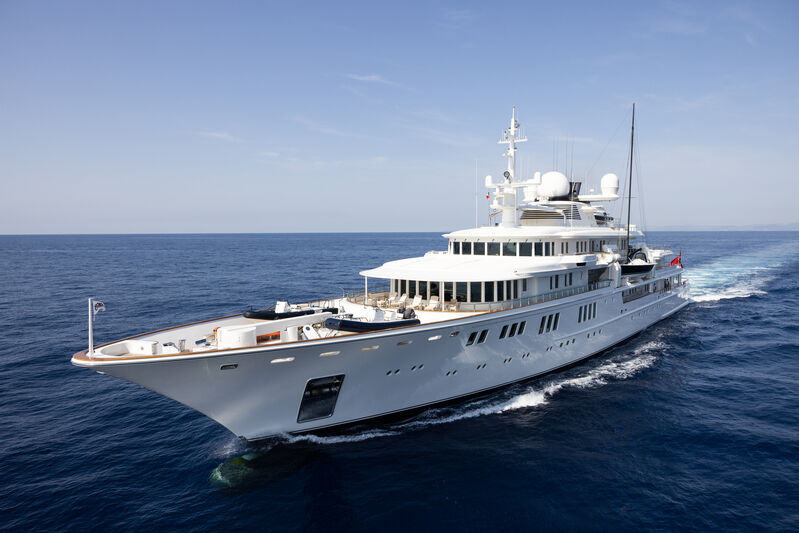 The 92.42-metre Nobiskrug superyacht Tatoosh was sold in November after being on the market for nearly two years. Dominic Millman of Burgess introduced the buyer, while Matt Emerson of Burgess and Stuart Larsen of Fraser co-represented the seller. Tatoosh has passed hands twice, and Stuart Larsen was involved in both negotiations. This sale marked the departure from the Paul Allen estate, which Tatoosh was part of for the past two decades. 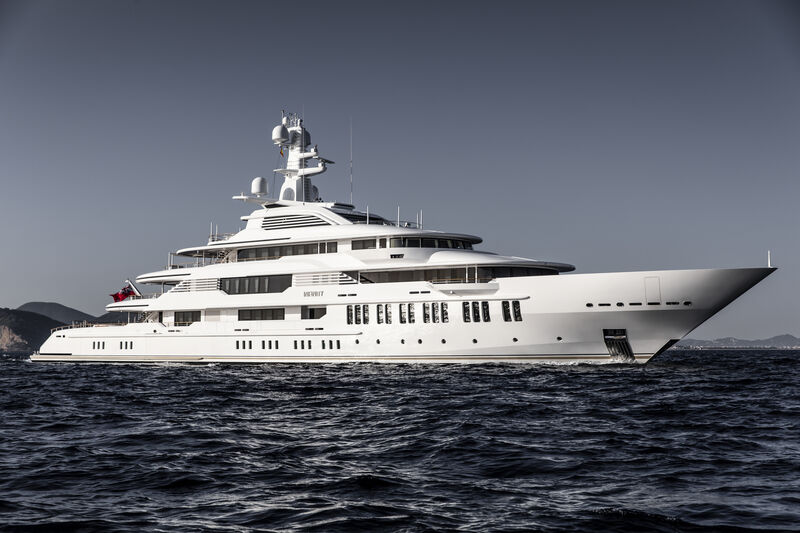 The largest Dutch superyacht sold in 2022 was Oceanco’s 88.5-metre Cloud 9 (ex. Infinity), which was signed for in May. Burgess introduced the buyer and co-represented the seller with Y.CO during this off-market deal. This was the first time Cloud 9 has changed ownership since her delivery. 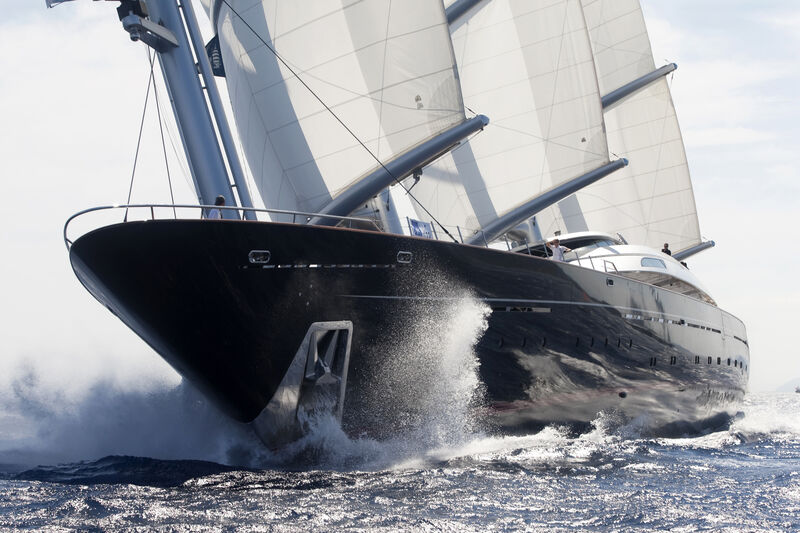 Perini Navi’s flagship superyacht Maltese Falcon was sold off-market during the first quarter of the year, and neither her selling nor buying broker are known. This is the third time Maltese Falcon has entered new ownership. The superyacht is currently drydocked at the Lusben Shipyard in Italy, undertaking an extensive refit that will be completed in April 2023, ready for a charter with Burgess in time for the Mediterranean season. 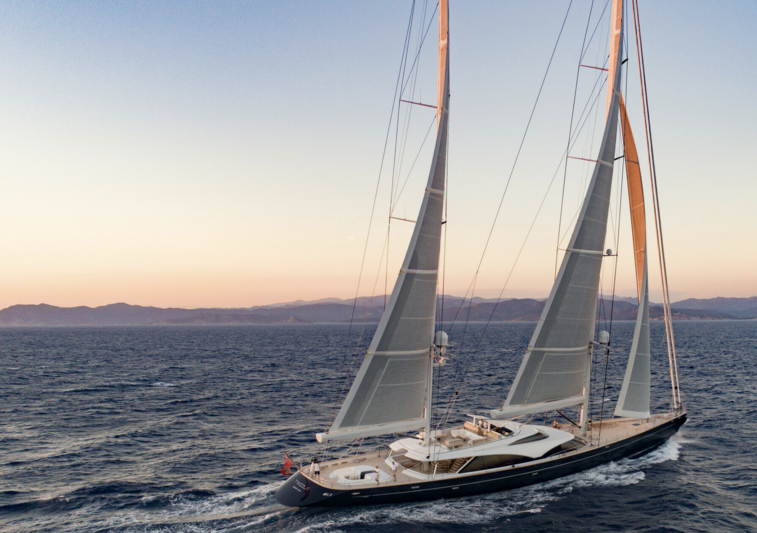 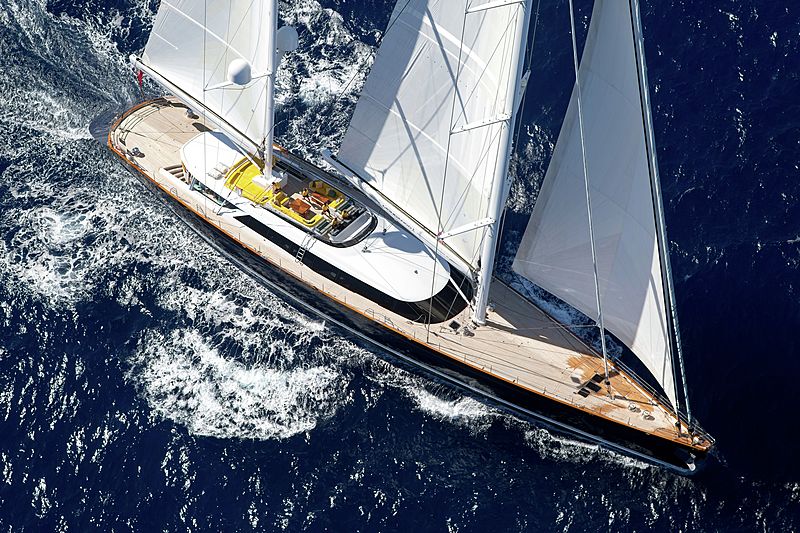 Alloy Yachts’ 56.4-metre sailing yacht Salvaje (ex. Mondango 3) was sold with Burgess representing both the buyer and seller in July. Henry Craven-Smith and Jamie Small of Burgess oversaw the negotiations. Salvaje quickly rejoined the market and is listed with Edmiston.