The 25.15-metre yacht Miss Cheshire has been sold after less than two months on the market. The deal was concluded with Stratos Korais of Atalanta Marine representing the buyer and Andrew Thomas of Sunseeker Mallorca representing the seller. 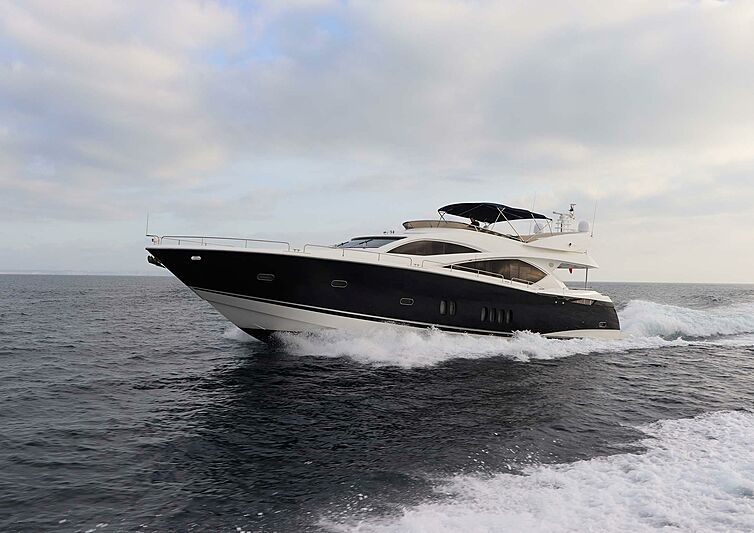 Miss Cheshire was launched in 2007 by Sunseeker as part of their popular Sunseeker 82 yacht series, of which more than 10 units were built. She was designed in full by her builder, Sunseeker Yachts. The 97 GT yacht can accommodate as many as eight guests across four staterooms situated on her lower deck. A VIP stateroom, complete with an en suite bathroom and a walk in closet, is situated forward. Two twin accommodations are situated to port and starboard, both of which have en suite bathrooms. The full-beam owner’s stateroom includes a forward-facing bed, an en suite bathroom and a walk-in wardrobe.

Miss Cheshire’s main saloon features large windows and provides access to a semi-enclosed galley to port as well as a dining area for up-to eight guests. Aft of the main saloon is her cockpit, which can also seat up-to eight guests. Her flybridge includes a full bar while her bow is home to sunbeds. At the yacht’s transom is a bathing platform which received new teak decking in 2019 as well as her side decks.

Performance-wise, Miss Cheshire sports twin Caterpillar C32 diesel engines, which allow her to cruise comfortably at 22 knots and reach a top speed of 32 knots. She was sold with a last known asking price of £1,190,000.