The latest yacht to be completed by Vitters Shipyard was lowered into the water at their facility in Harlingen, the Netherlands last week. The hull of the 33 metre yacht christened Missy was constructed at Vitters’ composite subsidiary Green Marine in Southampton and outfitted at the Dutch shipyard. Malcolm McKeon Yacht Design is behind the sleek lines of this high performance full-carbon sloop which is expected to embark on a series of sea trials out on the North Sea starting next week.

Despite her lightweight construction, the engineering team at Pure Composite in New Zealand paid great attention to achieving a noise and vibration free-ride by implementing various soundproof and thermal insulating solutions, all the while keeping a close eye on achieving the highest level of performance possible. 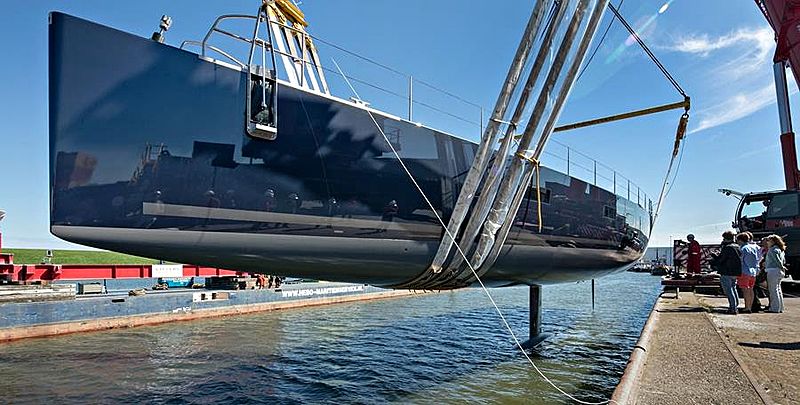 Design Unlimited created the yacht’s modern interior that consists of four cabins below deck in total – an owner’s suite forward and three guest cabins amidships and aft – to accommodate up to eight guests. Missy will be run by four crew members who are comfortably housed in two twin crew cabins. Crew comfort was a priority and will be greatly appreciated by Missy’s team as she is expected to embark on a world cruise following a season in the Caribbean.

“…it’s been a particularly exciting experience to design this superyacht for a new client, helping him transition from his knowledge of production boats to a fully-customised superyacht,” had designer Malcolm McKeon to say about the project.