A few months before the opening of the 33rd Cannes International Boat and Yacht Show, the big names in international boatbuilding have redoubled their drive and ingenuity to adapt their offer to the new world order. If the world of pleasure boats and luxury yachts has been heavily hit throughout the 2008/2009 season by the worsening economic conditions, it seems the time has now come for a slight recovery, supported by the unwavering interest of the yachting fraternity. There is no doubt that the new models and world previews will be at the port of Cannes starting 8 September. 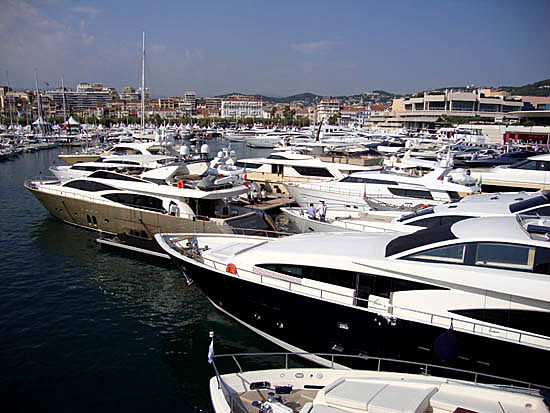 Already in 2009, in the midst of the crisis, French and international shipyards showed a capacity for innovation and exceptional resource to cope with the downturn in the market. In 2010, this concern is still relevant more than ever, and has paid dividends at many levels: new hulls, choice designs, and ever more irreproachable quality of service, etc.

And because there cannot be boating activities without a protected environment, the incorporation of environmental considerations is now one of the catalysts of the market: new engine types, hybrid engines, solar panels, LED lighting… As for the craft labelled “Bateau bleu” that comply with marine regulations, there will be many boats presenting equipment that allows better protection of the environment.

Thanks to a particularly rich offering on the one hand and top quality visitors on the other, the Cannes Boat and Yacht Show enjoys a reputation that now reaches beyond the boundaries of Europe. With 50% of the exhibitors coming from 25 countries, Cannes has established itself as a resolutely international event. While exhibitors from European countries still are the ones most represented, through the presence of French, Italian, British, Spanish and German shipyards, Eric de Saintdo, the show’s manager, is very pleased about the growing number of exhibitors from the United States, Russia, the Arab Emirates, Asia and even the emergence of Turkey whose boats offers a very high calibre of construction and finishing. According to Eric de Saintdo, “the Cannes Boat and Yacht Show constitutes an exceptional venue for the major players in international yachting to do business: a great many of them have indeed acknowledged filling their order books!”

The biggest names in international boatbuilding have already signed up for the show. Along the pontoons, visitors will therefore once again be able to find the symbols of exceptional know-how: Azimut Benetti, Baglietto, Beneteau, Cantieri di Pisa, Ferretti Group, Jeanneau, Peri Yachts, Pershing, Princess, Riva, Rodriguez Group, Sanlorenzo, Sunseeker, Heesen Yachts, and Wally,... They will also be able to discover a “newcomer”, the shipyard Monte Carlo Yachts, which will be launching its very first yacht, the MCY 76, a Cannes exclusive, on 8 September.

The 33rd show will naturally include the major features that made it so successful, namely a particularly comprehensive offering of small and large craft, both sail and motor, 95% of which will be displayed in water and able to be taken out on sea trials.

It should also be noted that in 2010, the Cannes Boat and Yacht Show will have a significantly increased number of large sailing boats and catamarans on display.

Owned and hosted by the French Nautical Industries Federation (F.I.N.) the Cannes International Boat and Yacht Show is organised by Reed Exhibitions France, with the collaboration of the Alps Maritime Departmental Council, the Nice Côte d’Azur Chamber of Commerce, and the City of Cannes.