Dubois has announced that the second Dubois designed superyacht is about to commence build at Feadship. Apart from its excellent fabrication and fit-out, this new 46.4 metre yacht will be notable for its unusual accommodation layout; the entire upper deck is given over to a private owner’s apartment complete with a six-seat dining table on the aft deck and a comfortable saloon. The sleeping cabin occupies the forward section behind a panoramic sweep of windows. The top deck also features a private hot tub. 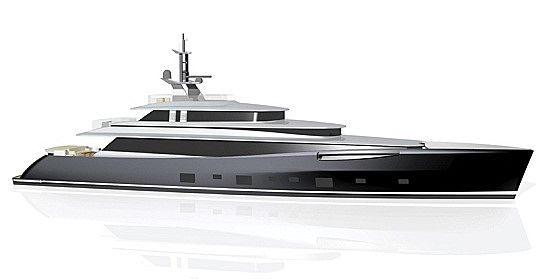 Guests are also beautifully looked after, with three spacious twin cabins and a double down below, while the VIP is found in the position more commonly claimed by the owner. This capacious main-deck suite occupies the forward section of the superstructure with spectacular sea views assured thanks to the glazed bulwarks. The hull windows will also allow plenty of daylight into the lower guest accommodation, where one of the twin cabins can convert to form a double.

With a transatlantic range and displacing around 360 tonnes, this capable and luxurious craft is powered by two 1,450hp Caterpillars giving a top speed of 16.5 knots and very economical cruising at 14.

The interior will be designed by Redman Whiteley Dixon, and she is due for delivery in 2015.

Feadship superyacht Kisses offered for sale for the first time