When My Song, the Baltic 130 sailing yacht designed by Nauta and Reichel/Pugh for Pierluigi Loro Piana, was irretrievably damaged in a shipping accident in 2019, many wondered what would be the veteran sailor’s next move. Most people thought he would build another custom sailing yacht, but what he actually did was go out and refit an explorer vessel.

“I’ve known Pierluigi for over 40 years and we’ve designed several sailing yachts and chase boats for him,” says Mario Pedol of Nauta Design. “After the unfortunate loss of My Song, we worked for half a year on a 57-metre concept for a new expedition yacht, but that would have taken too long from concept to completion. So the project was put on hold and the search began for a second-hand motor yacht capable of voyaging round the world with Nauta acting as the buyer’s broker. 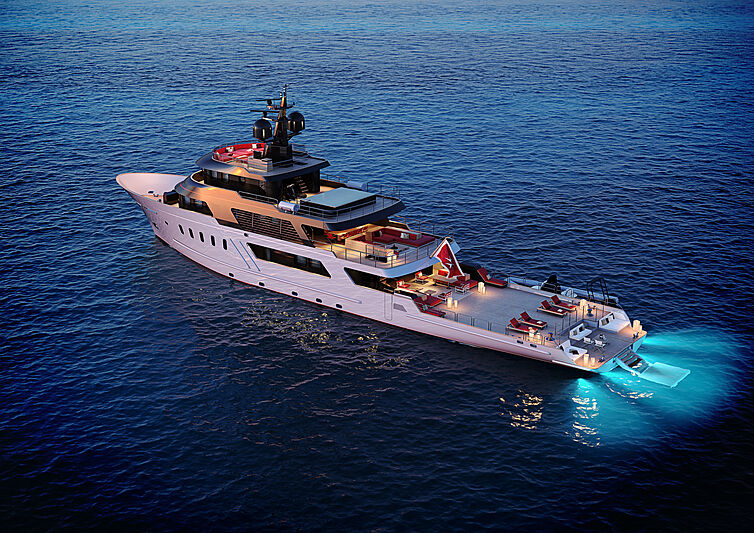 The choice of a motor yacht was based on the owner’s changing priorities. My Song was a racer-cruiser and Loro Piana still enjoys competitive racing, but there is no doubt that a motor yacht offers more cruising comfort. An expedition yacht for cruising and a Maxi sailing yacht designed specifically for racing would provide the best of both worlds.

Pedol tracked down 51-metre Aspire, an all-steel explorer launched as 45-metre Etra by the Penglai shipyard in China in 2006. Solidly built with ocean-going range, her specifications suited Loro Piana’s plans to tour the world with his family. Negotiations to buy the yacht began in the summer of 2020 and she arrived at the Lusben shipyard in Livorno the following October. Having already worked on the yacht, Lusben was ideally placed to meet the tight refit schedule and she was relaunched just nine months later as 51-metre Masquenada.

On main deck the biggest and most obvious intervention requested by the owner is the redesign of the aft deck. The stern had already been extended during a previous refit, but Loro Piana wanted a terraced aft deck and an open transom with a transformer-style beach platform for easier access to the sea. A major job was removing the old deck crane and replacing it with a custom-built, 7.5-tonne capacity knuckleboom crane that folds away out of sight into a compartment below deck. 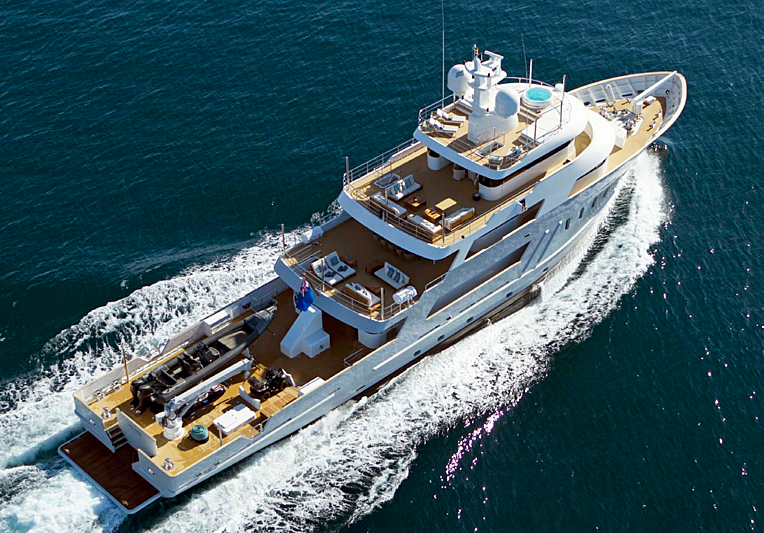 The crane hangar required replacing the aftmost hull block with a new 10-tonne section and naval architect Francesco Rogantin was engaged to reconfigure the underwater lines. The pulpit, bulwarks and stanchions were redesigned to allow for heli operations. The starboard access to the engine room is also new, as are the ventilation shafts with integrated chaise longues.

With space for two or more tenders, including an amphibious Iguana, when the tenders and toys are in the water the flush aft deck provides an enormous lounging or party space. Boarding gangways on both sides are height-adjustable depending on whether a tender or the Maxi Dolphin–Nauta chase boat is docking alongside.

Another structural modification was lengthening the aft overhangs of the upper and bridge decks by 1.5 metres to provide more open-air deck space and more shade underneath. On the bridge deck this means there is now room for two Melges sailing dinghies to be stowed away in a covered bay that doubles as a sunbed, as well as some gym equipment. The upper deck aft is set up for al fresco dining and lounging. The top deck serves as an observation platform with a fitted BBQ-galley unit. The longer decks further lend the yacht a sleeker and more balanced profile. 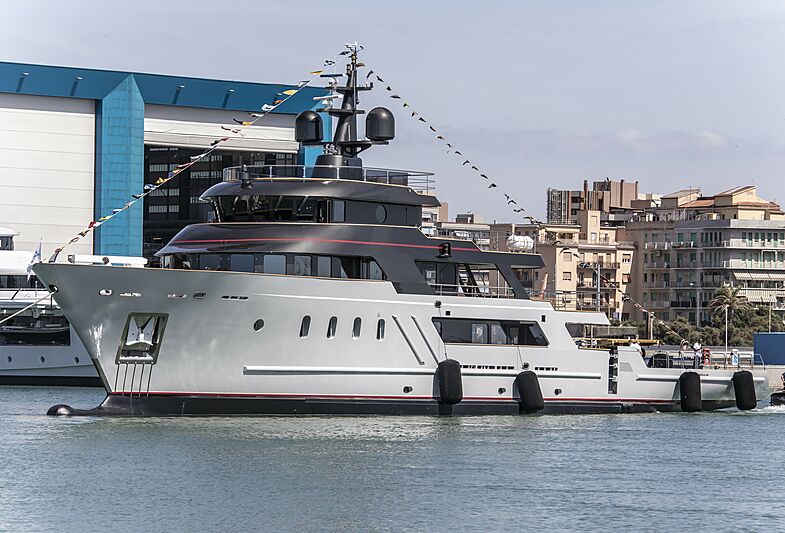 Accommodation comprises two suites on the lower deck, three on main deck and a master stateroom on the upper deck forward overlooking the mooring station in the bow for a total of 12 guests including the owner. The bulwarks flanking the owner’s lounge on the upper deck have been cut down to offer better sea views and the voids fitted with teak-clad aluminium louvres controlled by electric motors for extra shade or privacy when moored in the marina.

The sophisticated interior design by Misa Poggiis based on contrasting dark and light wood joinery combined with saddle-stitched leather and brushed bronze accents. The overall ambience is warmly refined but also casually welcoming with parchment, bamboo and woven finishes adding an exotic touch. 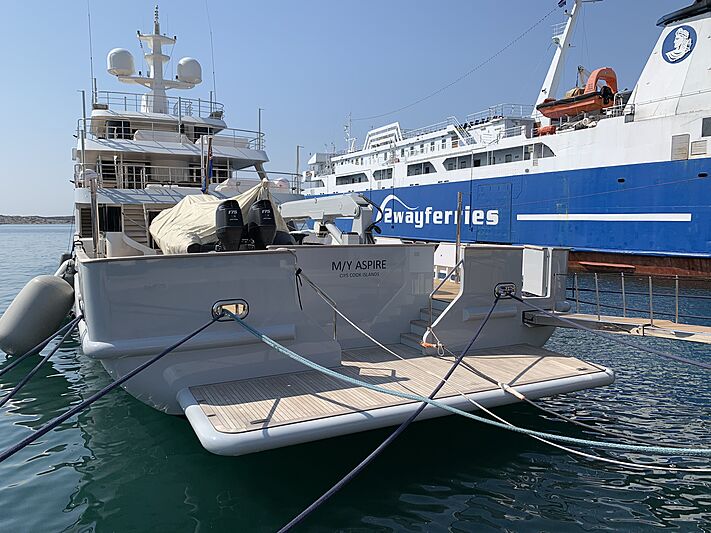 The lower deck crew quarters are surprisingly spacious. Services include a dedicated crew galley in addition to the pro-spec galley on main deck, cold and dry storage rooms, and a good-sized laundry in the forepeak.

Masquenada now has new electric steering with independent rudders as the crane compartment meant that the old connecting bar between the two rudders had to come out. The original Caterpillar 3508 engines only had 5,000 hours on them, but they have been thoroughly serviced and a new exhaust system fitted. Noise attenuation was a priority for the owner, so the brand new three Kohler generators are housed in sound-proof boxes and double mounted vibration dampers with structural reinforcements to avoid noise transmission through the hull. 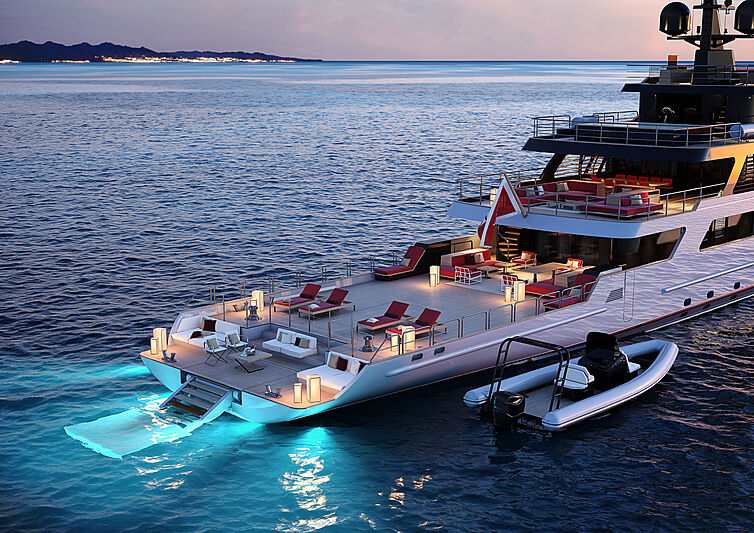 “I wanted to keep things as ship-like as possible in the wheelhouse,” says Clinton White, the former captain of My Song who is commanding his first motor yacht after more than 30 years of skippering large sailboats. “We installed an ECDIS [Electronic Chart Display and Information System] unit to replace paper charts, but other navigational equipment has mostly been upgraded or refurbished rather than replaced. The idea is have simple, fail-safe systems so the boat can be enjoyed rather than spending all your time maintaining or repairing it.”

Looking resplendent at her June launch in a new light and dark grey paint scheme, Masquenada has already departed for the Greek islands on her first Mediterranean cruise. The yacht will return to the Lusben yard for warranty work at the end of September, after which the plan is that she will set off bound for the Turks and Caicos, Cuba and the Panama Canal at the start of a three-year voyage that will take her around the world.