Guests and friends met at the Yacht Club de Monaco this morning to bid each other farewell at the conclusion of The Rendezvous in Monaco, organized from 24th to 27th of June 2010 by Boat International Media in collaboration with SYBAss. 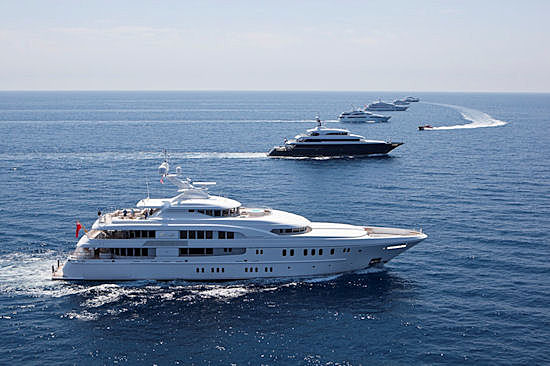 For the first time in Rendezvous history, owners and guests of the 15 superyachts (from 39 to 75 meters, a combined length overall of nearly 700 metres) which have participated in the past four days of fun and friendship, enjoyed an elegant social programme along with on the water activities including cruising in company and a Tender Poker Run, organized by the Yacht Club de Monaco and Société des Bains de Mer.

At the Sunday brunch, General Secretary of the Yacht Club de Monaco, Bernard d’Alessandri and Tony Harris, CEO of Boat International Media invited guests to The Rendezvous in Monaco prizegiving. First awards were for the Concours des Chefs, in which the chefs of each participating superyacht had competed for the honour of impressing a panel of Michelin-starred chefs who judged the contest.

Head of the judges was head chef to Prince Albert of Monaco, Christian Garcia, who kept the audience in suspense for the final outcome, before revealing the winning chef, Michael Goller of My Petra, a 44-metre Heesen yacht. Mr Goller could not disguise his pride and delight at winning, as he raised his trophy aloft in triumph, along with a jeroboam of Moët & Chandon. “This is thrilling to win this prize,” said Mr Goller. “I knew I’d done a good job but then I knew all the other chefs would have done a good job too, otherwise they would not be working on a superyacht, so I can’t tell you how excited I am to win this award.” Craig Stevens, chef of the 62.5-metre Icon, won the Special Prize for Outstanding Dessert. Final award of the prizegiving was for the Prix “Art de Vivre La Belle Classe Moët & Chandon”. Again this was judged by a panel of five experts, representing the Yacht Club de Monaco, Boat International Media and Moet & Chandon.

Since its creation in 2005 at the instigation of H.S.H. Prince Albert II, President of the Yacht Club de Monaco, “La Belle Classe” has established a code of good conduct and etiquette among members of the superyacht industry, with the intention that: “Today’s superyachts can survive the test of time to become the classic yachts of tomorrow.”

The award pays tribute to the owners of superyachts’ way of “Living the Sea”, and the judges were asked to consider three criteria:
- The owner’s approach and philosophy of “Living the Sea”.
- Respect for Etiquette.
- Crew Behaviour during the week and quality of greeting.

Raffaele Costa, owner of the Amy Admiral 54 superyacht, Sea Force One, and a member of the Yacht Club de Monaco, said: “The Rendezvous has managed to bring owners and their guests together in a way that has never been done before. It’s a very unique event and more people need to learn about The Rendezvous and experience it for themselves. This year has been incredibly well organised, spot on with the weather. Going out to sea was great, and maybe next year we could even go out for one night on the sea. That could be extraordinary. But this year’s event is the result of a lot of hard work and we have enjoyed a beautiful time in Monaco.”

The next Rendezvous in Monaco will take place in June 2011.