Superyacht U-77 has had a colourful and fascinating life since her beginnings in Chile in 2006. Her construction started out at the Chilean shipyard, Marco Yachts, under her project name Gin Tonic II, and she was first scheduled for a 2009 delivery.

At some point during her build however, the project was put on hold, and in 2011, the hull and superstructure were towed 9698km for the transpacific journey to New Zealand, where she was to be completed.

In February 2013, The 77m superyacht U-77 moved from Auckland to Whangarei, reportedly to undergo completion work and, now, the project is listed for sale with Burgess and Fraser Yachts. 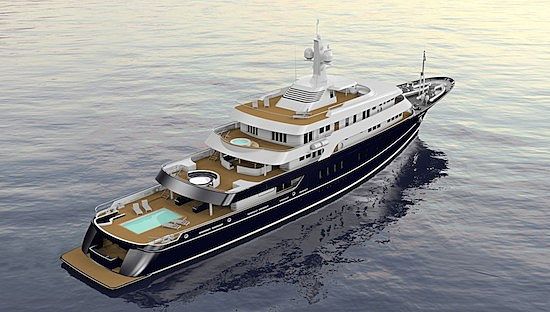 U-77 is a high volume explorer yacht project which provides excellent versatility for a buyer to customise. The vessel design has been enhanced to optimise its sea-keeping and manoeuvring abilities. Following tests by the Marin marine research facility in Holland, U-77 was awarded the highest rating for hull form and efficiency, promising her new Owner economical running costs and excellent range.

She is arranged over 6 decks with a total floor area of 1260sqm and can accommodate 20 guests over ten luxurious cabins, including one master suite, a VIP cabin and 8 double rooms in total. She also accommodates up to 20 crew. Although a comprehensive amount of design work has been carried out, most of the completed interior has yet to receive its final finish, allowing her new Owner considerable scope for personalisation. The current general arrangement allows for a large sky lounge, cinema and formal lounge. The main deck has provision for a swimming pool, galley, exterior lounge, saloon, 4 guest cabins, the VIP cabin and HVAC room, whilst the foredeck has provision for two 9 metre tenders.