Fourteen years after her keel was laid on the other side of the world, an 85-metre motor yacht with a colourful history is nearing completion at AKYACHT in Turkey. 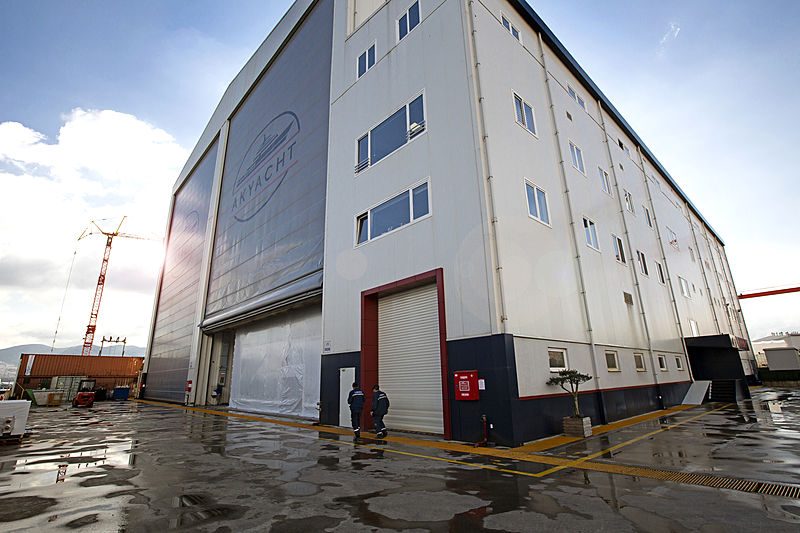 Photo: Justin Ratcliffe / SuperYacht TimesSome readers may recall a 77-metre explorer-style yacht with exterior styling by Michael Leach Design that started life back in 2006 as Hull U-77 at Marco Yachts in northern Chile under the project name Gin Tonic II. Rumours that the confidential project had stalled were confirmed in 2011 when it was acquired by serial superyacht owner Graeme Hart in New Zealand, who had the unfinished vessel towed across the Pacific Ocean to Auckland.

Renamed Project Weta, in early 2013 it was moved up the coast to Whangarei for completion work but was then listed for sale still unfinished. In February 2016 Fraser Yachts announced they had sold the yacht and later that year it arrived in Turkey at AKYACHT, a new shipyard at the eastern end of the Marmara Sea, under the project name Grand Seraglio. 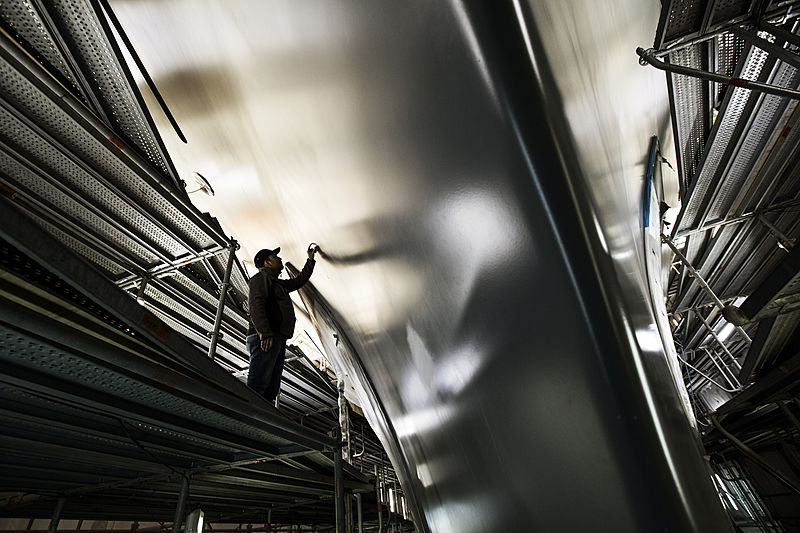 Photo: Justin Ratcliffe / SuperYacht TimesFast forward to late 2019 and I’m standing under the imposing bow of the vessel now called Project Victorious, accompanied by the shipyard’s general manager, Deniz Kaymaz: “The yacht arrived in Turkey in June 2016, by which time she had already travelled 37,000 nautical miles on her own bottom with zero hours on her engines,” says Kaymaz as he inspects the hull fairing and last coats of primer after it was decided to upgrade from a commercial to a full superyacht finish. “We got quotations from various shipyards in Turkey to complete the build, but the experienced owner, who has a fleet of yachts, eventually decided to set up his own facility and by March 2017 we were ready to haul her out and start work.” 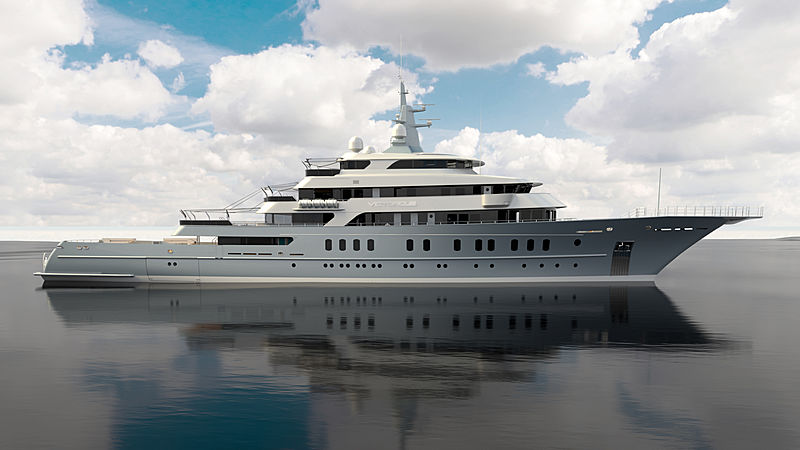 As the keel was laid in 2006, the yacht is being completed to LY2 criteria. The first task was to increase her overall length to 85 metres by adding a bowsprit and six metres in the stern to make way for an indoor pool inside the lower deck beach club. The owner’s apartment on the bridge deck was also expanded and the original sun deck (the only deck built of aluminium) replaced with a new enclosed top deck. These two major modifications bumped up her already considerable gross tonnage to just over 2,300GT. Originally slated for completion last May, a late decision to switch to UK-based H2 Design for the interior design pushed back the schedule and the yacht is now expected to splash at the end of this year.

“Around 500 square metres of joinery arrived with the yacht in containers along with other equipment,” says Kaymaz over Turkish coffee before we go aboard. “We had a local designer working on the project, but the owner decided to bring in H2 to refresh the interior concept to better suit the tastes of today’s charter clients. That delayed our schedule as all the fixed furniture and fittings are being manufactured in-house by the shipyard.” 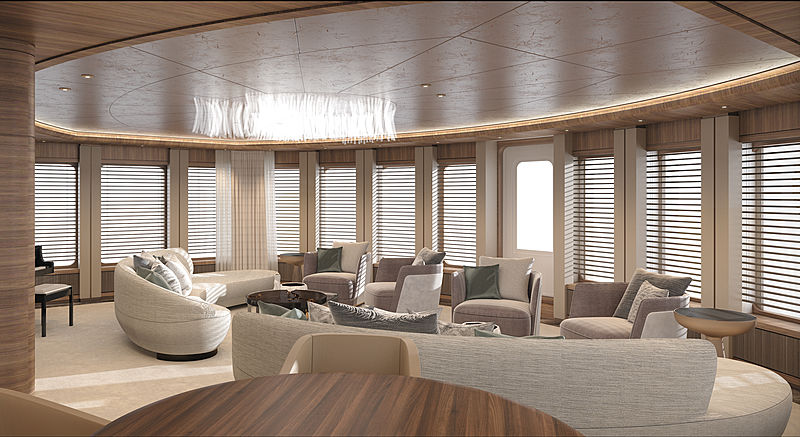 Photo: H2 Yacht DesignThe new interior design makes use of some of the original materials but also introduces new ones with satin or textured finishes for a more contemporary and residential ambience that still has a nautical flavour. 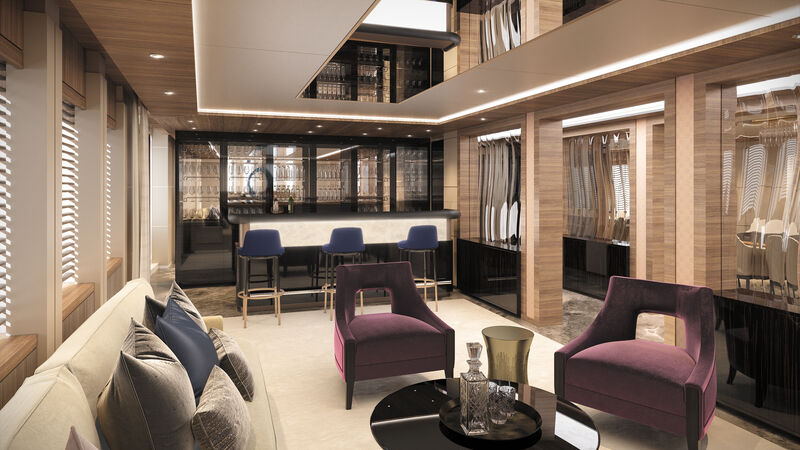 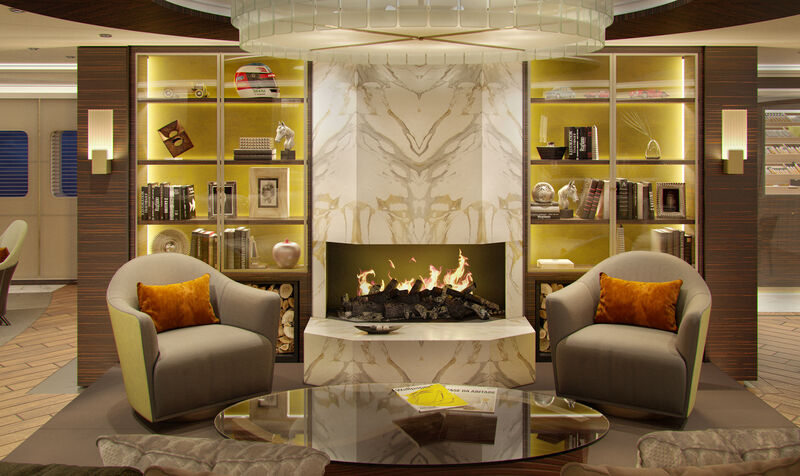 Photo: H2 Yacht DesignWe begin our tour on the top deck in the new cigar lounge, conceived as a “man cave” with walk-in humidor, wine cellar, bar, overhead skylights, openable forward windows and sliding glass doors onto the lofty aft deck. There is also a marble-clad, wood-burning fireplace, which meant installing extra fire insulation and a smoke extraction system as required by Lloyds Register. The lounge has effectively been built on top of the former sun deck and brings the total number of decks to six, including the under lower deck that houses the crew mess/lounge, laundry, dry and cold stores, and other technical spaces. 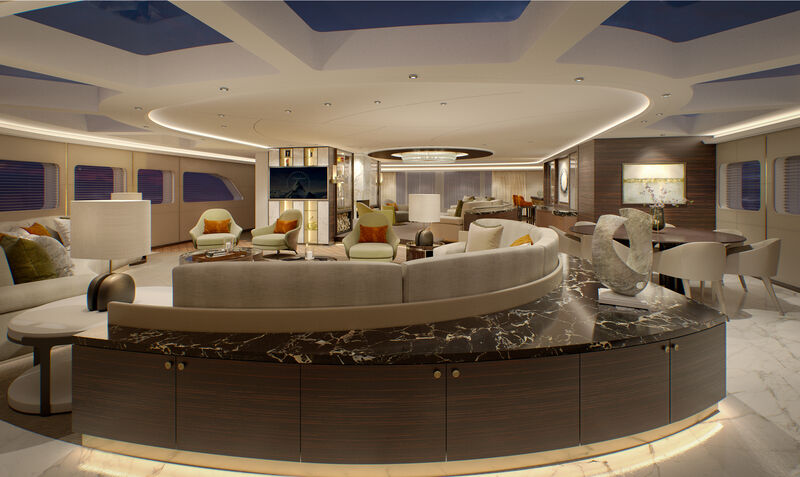 Photo: H2 Yacht Design“We’ve been very mindful of adding weight up top,” says Kaymaz. “We carried out initial stability tests when the hull arrived, so we have a good idea of how far we can go without affecting stability, but the whole structure is on load sensors and we keep close track of the weight going on the boat.” 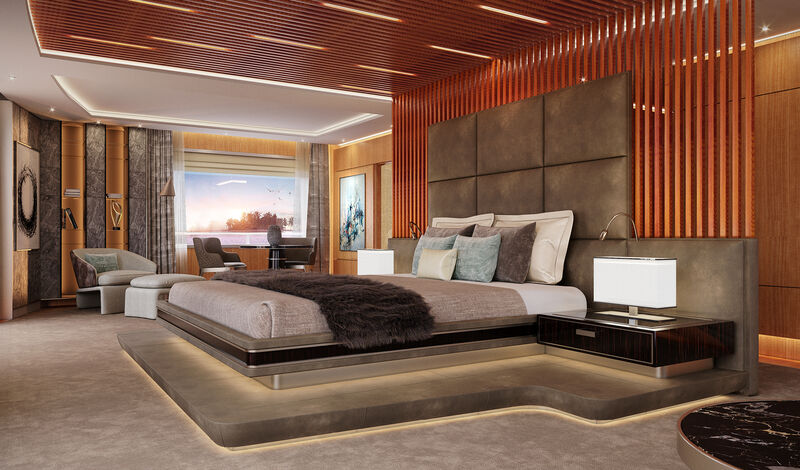 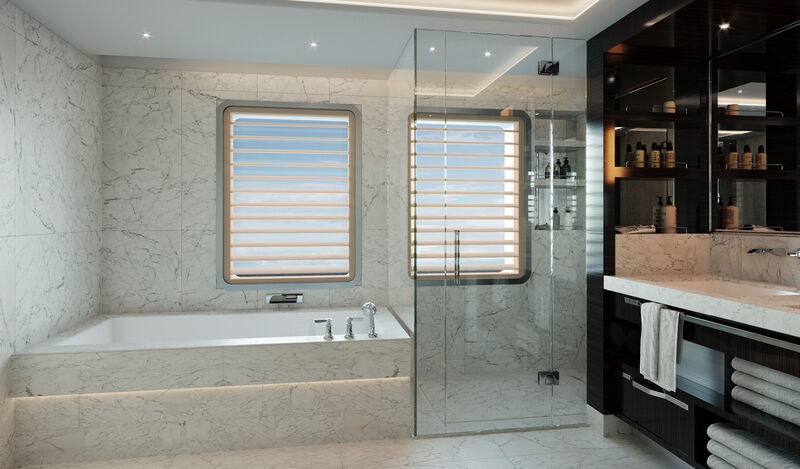 Photo: H2 Yacht DesignThe layout of the owner’s or bridge deck also changed as the original arrangement had two VIP suites instead of the master stateroom that now looks out over the aft deck and a private Jacuzzi (the suite’s footprint was extended aft to increase the size of the bathroom and walk-in wardrobe, and if you look carefully at the yacht’s profile the enclosed upper deck is slightly longer than the deck below). In addition to the captain’s cabin behind the wheelhouse, there are two cabins that can be used during charter by children and accompanying staff. 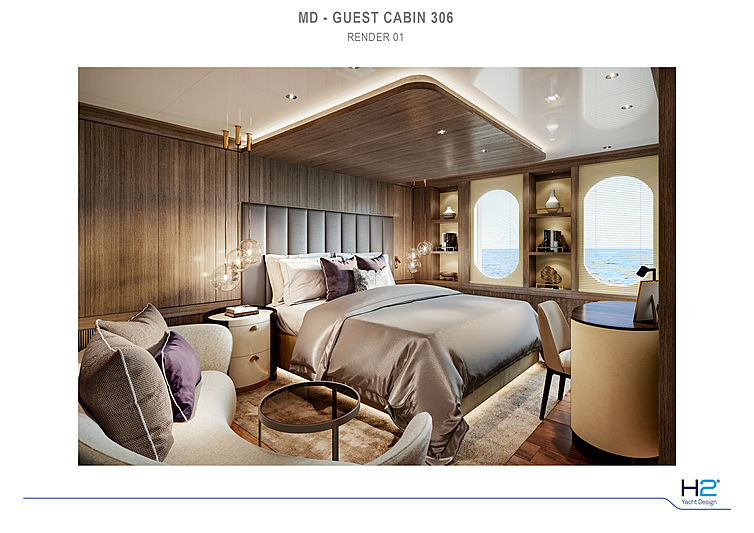 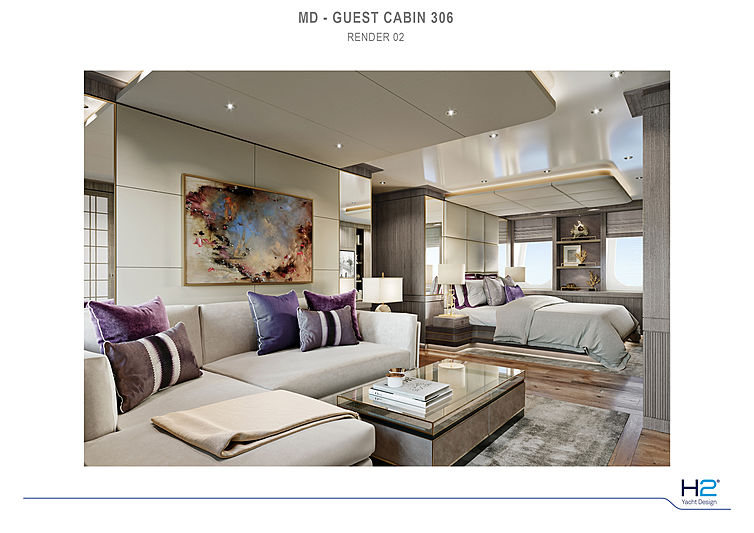 Photo: H2 Yacht DesignThe upper deck has remained more or less as originally envisaged with a sky lounge, formal dining room and facing cocktail lounge, and a forward observation salon that overlooks the touch-and-go helipad in the bow (although not a certified helideck, this new addition can accommodate some of the bigger twin-engine helicopters such as the Augusta Westland AW 101 VVIP). On the aft deck there is a guest Jacuzzi and the overhead bonnet has been extended to create more shading for al fresco dining with overhead heating and glass windbreaks to create the feeling of a winter garden. 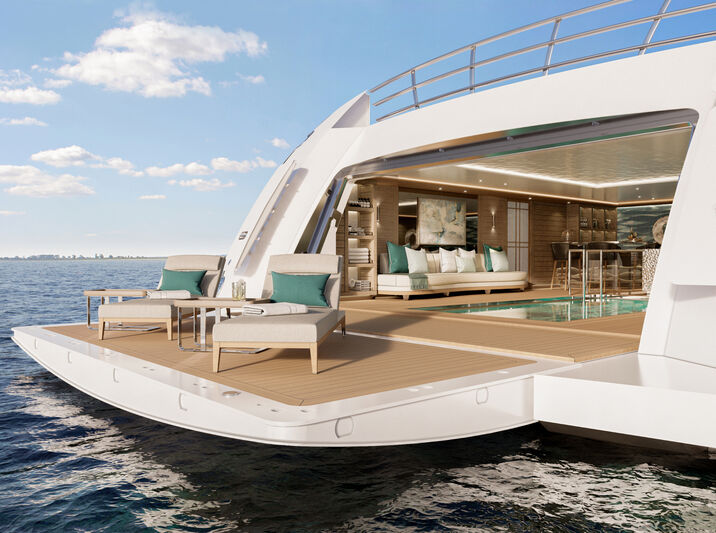 Photo: H2 Yacht DesignA new addition on the main deck is a fully soundproofed 10-seat cinema room, which doubles as a video gaming room for older children (there is also a playroom for younger kids). An industrial-spec galley was designed with the help of a professional chef. There are four en-suite guest cabins on main deck and a VIP suite with an adjacent living room. A further four cabins on the lower deck are finished to guest standards, but these are for use by staff or supernumeraries. 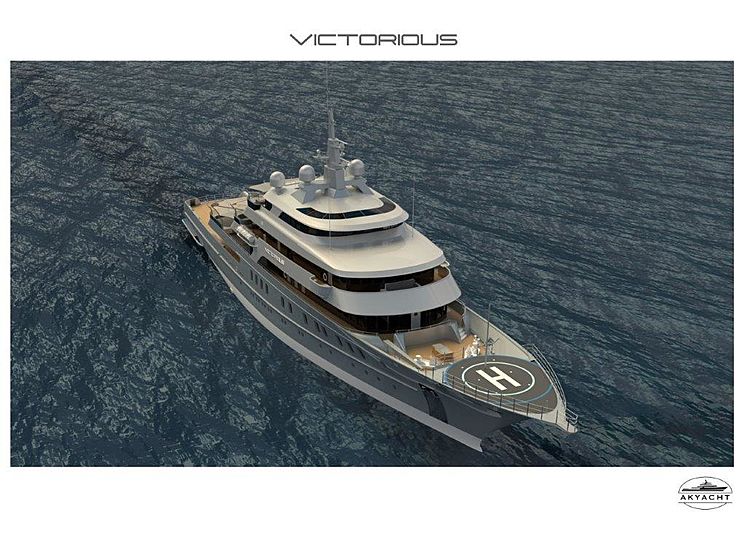 Photo: AkyachtIt was a conscious decision not to have garages in the hull that open at water-level, as even modest waves can sometimes interrupt tender operations. Instead – and in true explorer style – a variety of guest tenders are stored on the main deck aft in air cradles that can be moved around and launched by two six-tonne-capacity cranes. The choice of tenders and toys, such as a 16-metre high-speed catamaran, landing craft or sport fisherman, will depend on charter requirements. 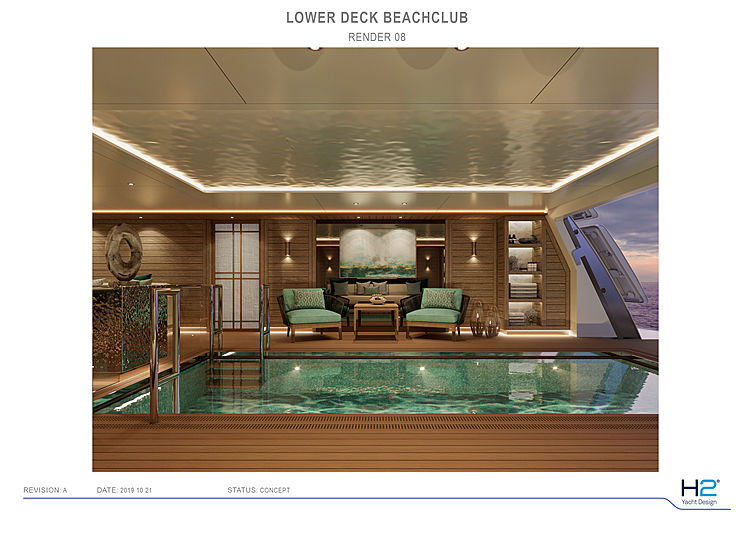 Photo: H2 Yacht DesignHaving no tender garage on the lower deck meant more real estate could be devoted to the beach club, which covers a huge area of more than 200 square metres when the three fold-down platforms are deployed. Amenities include a beach lounge, gym, massage room, beauty parlour, hammam and a 5.5x2-metre contraflow heated swimming pool that can be filled with freshwater or seawater. 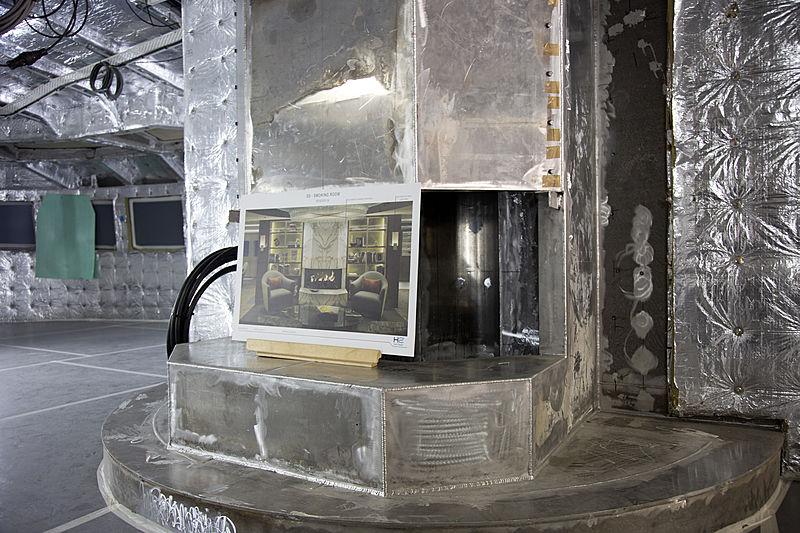 Photo: Justin Ratcliffe / SuperYacht TimesAKYACHT, which is still undergoing finishing work of its own with more workshops due to be built, is clearly determined to make an impact with Project Victorious and is cutting no corners. The technical specifications have been tweaked where appropriate, from replacing galvanised piping and cable trays with stainless steel to upgrading major machinery. 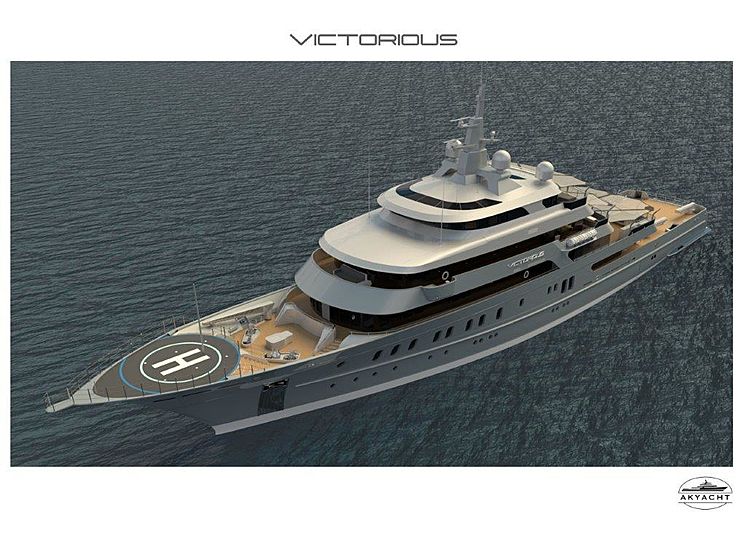 Photo: AkyachtThe yacht was already fitted with CAT 3512B main engines and four CAT C9 generators, but the latter were underpowered at 200kW each and all four would have had to be running when underway, so two have been swapped out for more powerful C18 465kW units for redundancy and more efficient power management. A second pair of Quantum stabiliser fins have also been added, which will be 25% more effective at roll damping than the original single pair alone. Even the teak decking is a generous 23mm thick and Kaymaz travelled to Myanmar eight times to source the best quality certified logs.

“One thing is for sure: Project Victorious will be a better boat than the one they started building in Chile all that time ago,” the general manager concludes. “Sometimes good things come to those who wait.”

Superyacht refit in Turkey: An Investigation