Joseph Artese of Joseph Artese Design shares his thoughts regarding the metamorphosis of a Seattle crabber to a superyacht shadow type boat.

“My first contact with SuRi’s inspiration and builder, Stan Antrim, came when he was captain of the megayacht Lady Lola and was looking to develop a toy hauler for the mother ship. I had the opportunity of working with Lady Lola’s owner, as well as Captain Antrim and his team, and did some initial design studies and styling renderings in collaboration with NA Boris Kirilloff on behalf of another builder (Stabbert Maritime) for the initial shadow boat, Lady Lola’s Shadow.

“Antrim later started Shadow Boats, Inc. and still later, YES (Yacht Escort Ships International) both of which specialize in conversions. I was instrumental in bringing a likely conversion candidate to the attention of Antrim. She was the 166’ Seattle based crabber Fierce Contender which became the basis for the SuRi refit. 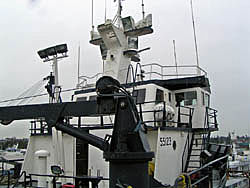 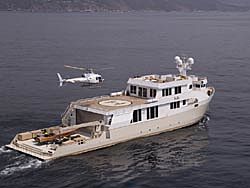 “In her new life, SuRi was to accompany her owner’s larger yacht, JeMaSa, to carry and garage her helicopter, smaller boats and water toys.

“Antrim asked me to do the exterior styling retaining the original pilothouse and to try to provide a family resemblance for the duo, as they would be traveling together as a couple. This required hanging new fashion plate on the existing superstructure that would complement the mother ship’s distinctive styling and doing everything else that would make SuRi a more attractive yacht.

“But you can do just so much with simple cosmetics.”

“To my thinking, the most disturbing feature of these shadow type conversions to date had been the ungainly appearance of the new helicopter pad and hangar on deck which yielded a look ‘rather like a huge bread box on a barge’.

“My desire was to transform this vessel’s appearance from a work boat to a well proportioned yacht. To do so meant a primary task of “visually” lowering the height of the hangar. Of course, we still needed all 16’ for the bird. So I raised the freeboard or bulwarks along the entire length of the hangar by 6’. This brought things into a better proportion and allowed me to design windows in the sides of the hangar that looked more like large windows in a dining room or saloon.

“The only problem with this scheme was that adding all that steel to both sides of the boat might be hard to sell. The solution became designating this ‘extra volume’ as much needed stowage and locker space accessible from inside the hangar; thus, the concept flew.