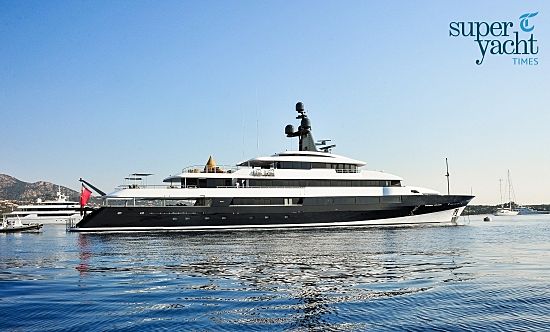 To fully appreciate the incredible transformation at hand, one must travel back in time and relive Falcon Lair as she was first launched at Feadship’s Van Lent yard in 1983 as New Horizon L. An all-star team consisting of Jon Bannenberg, Frits de Voogt and Luigi Sturchio was assembled to create a world-cruiser to meet her Dutch owner Bram van Leeuwen’s live-aboard requirements. Sturchio, who at the time had just completed the interior of Nabila (now Kingdon 5KR), was motivated to design an interior to meet those exact requests, and managed to do so by designing guest areas that would stay relevant for many years to come. 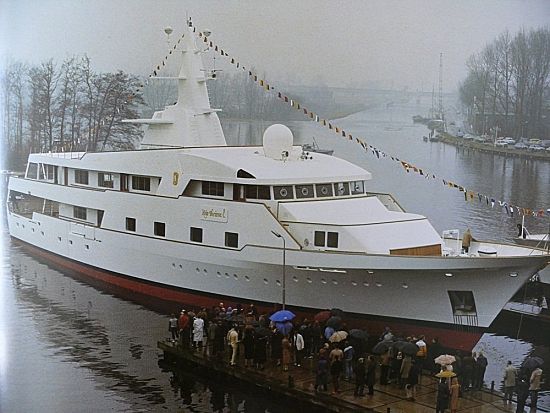 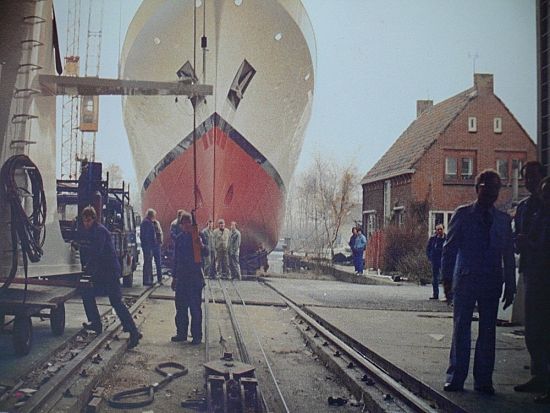 New Horizon L was extensively used by Van Leeuwen, who sailed around the world during his time living on board. Following his passing in 2001, the yacht was sold to an experienced American owner, also known to have commisioned M/Y Tatoosh back in 2000. During his time as owner of the vessel, he renamed her White Cloud and had her sent to Germany in 2004 where she was lifted out of the water to start with what would become her first major refit. 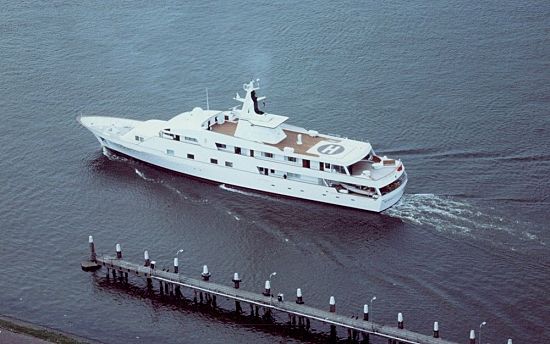 It was during this yard period at Peters Schiffbau GmbH that the yacht was lengthened from 60 metres to her current 67.3 metres, while various other cosmetic works were also being completed. Terence Disdale Design was assigned to draw a new profile of the yacht with an extended hull and aft-facing decks, including a new sundeck structure. She was also modified with a redesign of the interior areas by the same design studio. 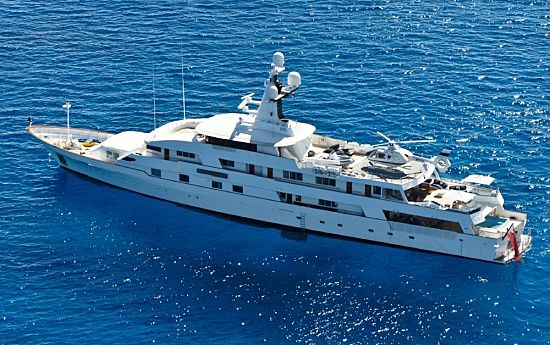 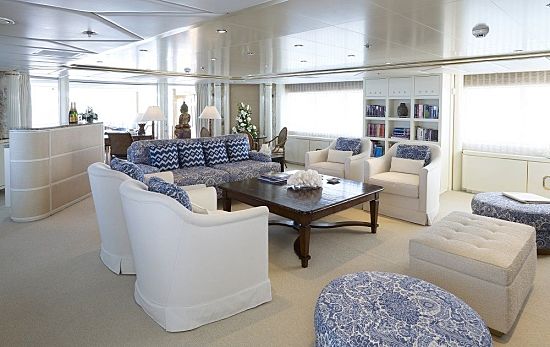 Other notable added-features during the yard period include a new large jetted-pool placed on main deck aft, a gym on the upper deck, and the installation of zero-speed stabilisers. 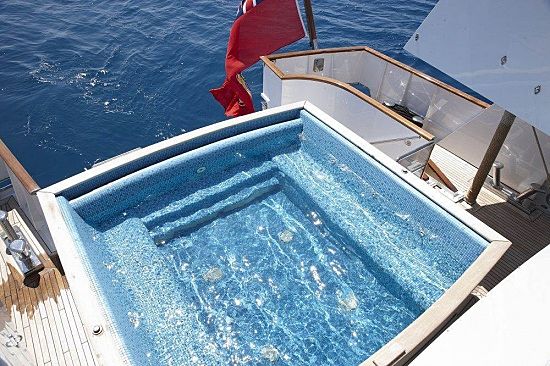 White Cloud was first introduced in 2006 to Compositeworks, operating from their La Ciotat shipyard in France. The company took the vessel in during an emergency haul-out where she had various through-hull fittings replaced, new rudder fittings installed and new anti-fouling applied. 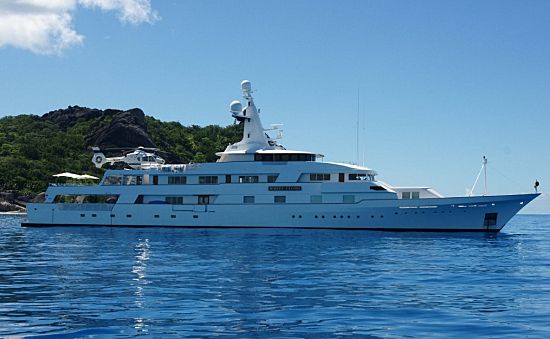 In 2010 White Cloud completed her 25-year Lloyds survey in Fort Lauderdale, Florida, during which her exterior received a complete new refinishing followed by a coat of glistening white paint; a project where DuPont and Fort Lauderdale-based Luu Marine Ltd. worked closely together. Her engine control, machinery and monitoring systems were also upgraded during this period. 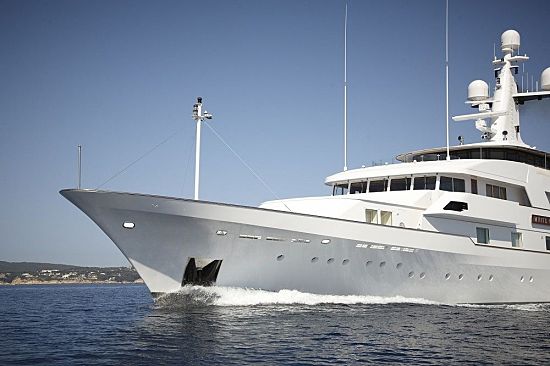 It was in 2012 that the yacht was put up for sale only for the second time since her launch 29 years ago. Her current owner made the purchase in 2014 and had her renamed Falcon Lair. Olesinski design studio was drafted to come up with a new exterior design that would once again have her seem as modern as she did the day she was launched in 1983. 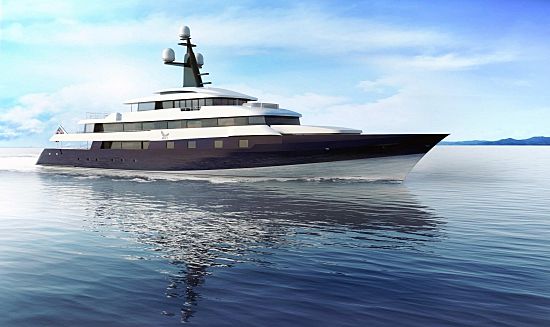 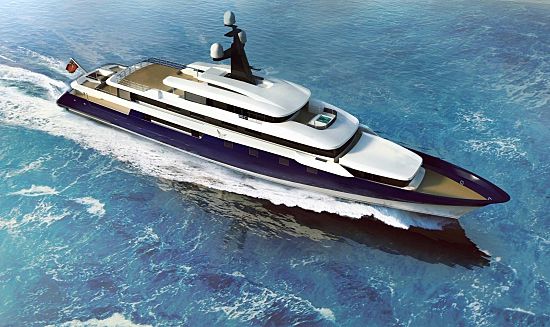 She features a newly reshaped and extended sundeck structure. Aft facing decks have had their fashion plates removed and are now supported by slender stainless steel poles, creating a greater viewing area for guests. Falcon Lair has been dressed in a classically elegant dual-colour tone of deep blue and white with a black inboard structure. It was the experienced ACA Marine’s job to treat the yacht for corrosion before re-faring the superstructure and applying her brand new coat of paint. 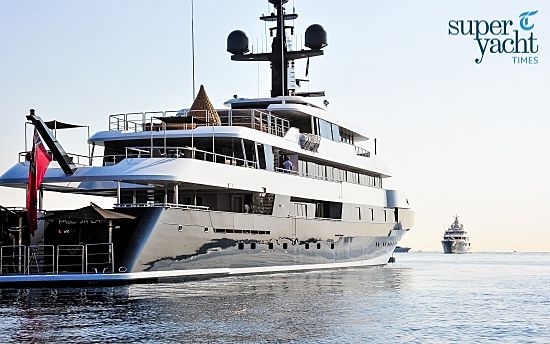 Justin Olesinski had the following to say about the exciting project, “From the point of commissioning to delivery it has been a tremendous privilege to work on this particular project, transforming the vision of our client into a design that we feel is both timeless and enduring. A fantastic collaborative project with great mutual support from Compositeworks, as well as the Wild Group, we are absolutely delighted with the end result." 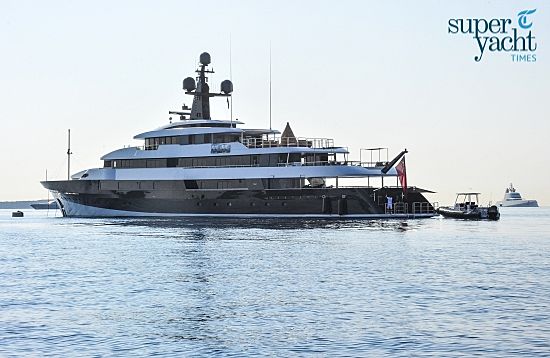 Rob Papworth, Director of Compositeworks felt pleased with the end result and had the follwing to add, "We had been fortunate enough to work many times on the vessel in its old guise as White Cloud, which had already been heavily modified from her New Horizon L lines. We felt privileged to form part of the team along with Olesinski Design, transforming her to her new lease of life. Any Owner that is prepared to take the risk to undertake such a project should be congratulated, but one that takes on the challenge and really conquers it, producing such a stunning result such has been the case with Falcon Lair, should be thoroughly applauded.” 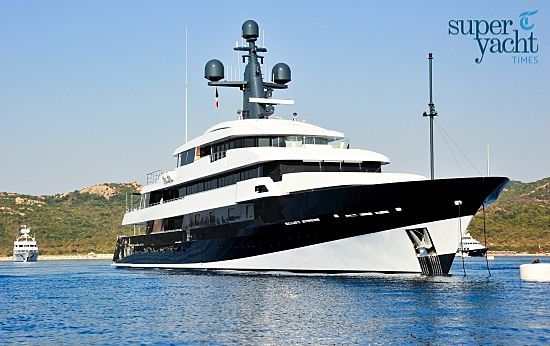 The results of the transformation work done by Compositeworks speak for themselves. The Falcon Lair we see today has come a long way since her first day on the water as New Horizon L. Yet, she is as relevant as she was back in 1983 and is now ready to once again cruise the seven seas as an example of what’s possible when quality craftsmanship combines with industry-leading engineering and design.