While on vacation in the Mediterranean on his father’s 77ft sailing yacht John Tomlinson was surprised to see the huge truck mounted machines which were necessary to clean carpets onboard neighbouring yachts. His uncle, based in Canada, has an upholstery and carpet cleaning company, called Rotostatic. 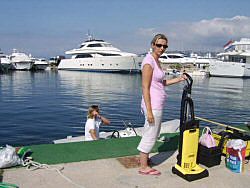 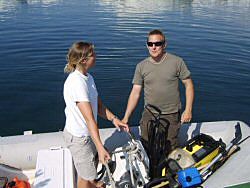 The company became very successful due to its advanced technology based on the electrostatic attraction of dirt and is presently the largest such business in Canada. Together with his wife, John founded AAA Rotostatic in the South of France to service yachts along the Mediterranean with this exclusive innovative Rotostatic technology. 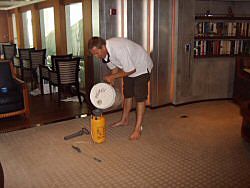 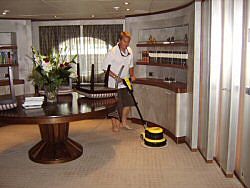 The AAA Rotostatic teams use a commercial vacuum to capture loose dirt, then spray a detergent to deodorize the carpet fibers and break dirt into smaller clusters; this detergent also has a positive charge. The team then pushes a soft-headed negatively charged rotating machine across the carpet’s surface. The machine creates an electromagnetic field, which attracts the now-positively charged dirt particles to the soft surface. The final step: grooming the carpet to fluff its appearance and additionally speed up drying time, within two hours the carpet is ready to be walked on.

It’s not only the turnaround time which makes AAA Rotostatic an interesting option, but they use portable equipment, making it possible to service yachts at anchor. The company is now two seasons underway and it has serviced a long list of yachts including superyachts like, Rosehearty, Multiple, Duke Town, Esence, Lady Esther, Titan II and many more. 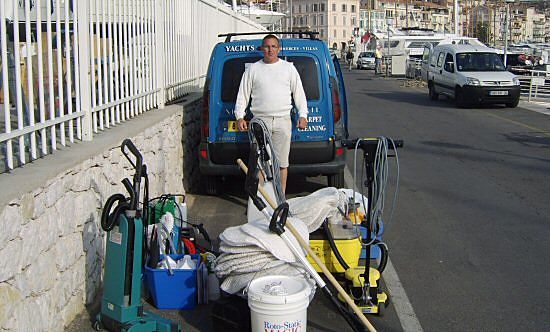 “As word spreads about our unique technology, we have been detailing more and more yachts while at anchor”, says John Tomlinson. “One special case was the urgent cleaning of a Cruise Luiner”, John continues. “We received a phone call from the cruise ship if we could clean the vessel the following morning, but before the passengers embarked in the afternoon. The next day the AAA Rotostatic team was out there and passengers did embark on time, in a clean environment with clean and dry carpets”, says John proudly.