The life story of the 64 metre MV Santa Rita I is not a happy tale. After spending over 40 years at sea, her life comes to a dismal end in a lonely metal scrap yard in Florida. Her service as a naval vessel in the Atlantic is where this story begins.

Life for Santa Rita I started as an Irish naval patrol vessel named Le Deidre P-20, stationed off the Atlantic coast of Ireland, after launched at the Verolme shipyard in Cork in 1972. During her service lasting nearly 30 years, Le Deidre performed missions against the smuggling of weapons to the terrorist group IRA at the time and often took part in extensive search and rescue missions in the rough waters that characterises this stretch of ocean. She is well known for her central role in rescuing survivors during the 1979 Fastnet Race disaster. 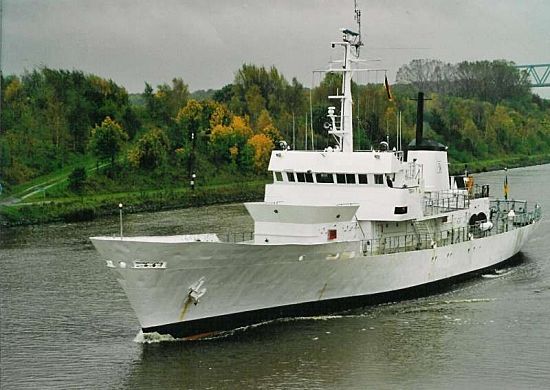 The day eventually came that Le Deidre had to make way for a newer generation Róisín Class patrol fleet, and after nearly 30 years’ service, she was decommissioned in 2001. She came under the hammer soon after in an industry auction where she was acquired by a British multi-millionaire. Matthew was known for his controversial way of avoiding the tax man by living on board yachts and other pleasure craft where ever in the world he would find himself, and Tosca IV (as renamed by Matthew) would be his new home away from home.

The vessel made her way to Poland where the conversion from offshore vessel to luxury yacht would begin at the ship repair yard of Pomerania. Matthews, however, sadly passed away in 2004 when he was a passenger in a helicopter accident in the States, and with that the fate of the vessel was once again was up in the air.

In 2005, images revealing the incomplete Tosca IV being towed to Brazil for completion confirmed rumours surrounding an interested buyer from the country visiting the shipyard in Poland earlier in the year to purchase the vessel. In Rio de Janiero, work started following a complete redesign of the vessel by the hand of designer Fernando de Almeida. The yacht, now named Santa Rita I, remained here for some years while she had work done on her interior guest areas, complete exterior restyling and a large helicopter landing pad fitted. The design of a low profile superstructure was introduced with the hope to cancel the vessel’s notorious rolling, experienced even in moderate sea states.

In 2013 however, after the yacht was finished to a near completed stage, the project took a turn for the worst, and was abandoned for reasons unknown. With her fresh new green and white paint finish, she was then towed to the BAE shipyard in Jacksonville, Florida, where scrapping operations would commence. 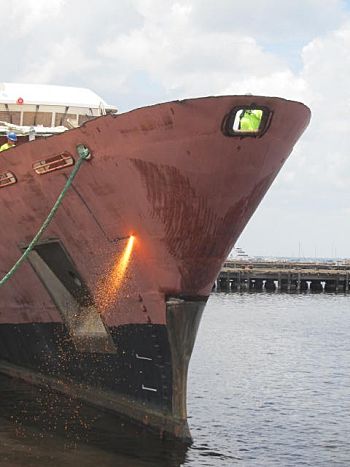 Her final voyage was a tow up the St. Johns river in North Florida to reach Green Cove Springs in August 2014, where American Salvage & Trading started the dissection of what was left of the former Le Deidre. Once a mighty and formidable force that weathered storms in the North Atlantic, piece by piece she was dismantled and sold for her worth in metal.