Abeking & Rasmussen (A&R), together with Reymond Langton Design, have come up with a 63,40 metre Swath superyacht design. SWATH stands for “Small Waterplane Area Twin Hull”. The concept is based on two torpedo shaped submarine hulls, completely submerged below the water surface. These hulls are connected to the yacht by two narrow struts. 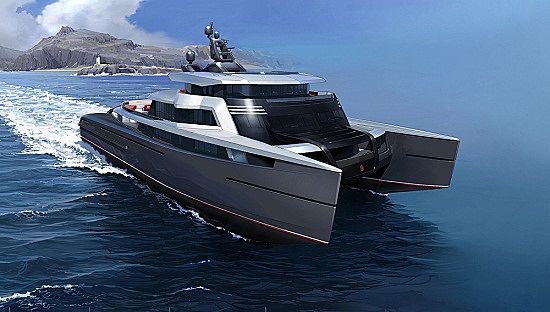 The cross-sectional area at the sea surface is approximately 1/6th that of a comparable size yacht and thus only a minimum part of the ship is exposed to the lifting forces of the waves while 5/6 of the buoyancy is on the submarine hulls.

Because of the small contact area between the hull, and the ocean, Swath vessels are far less affected by the motion of the sea, resulting in considerately less vertical acceleration. 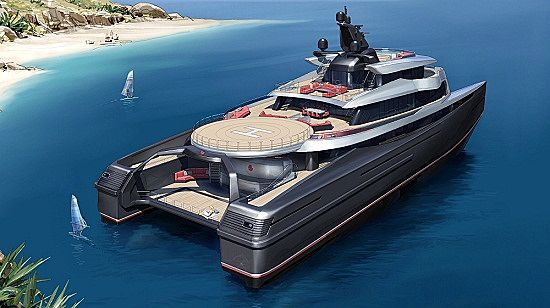 Additional stability is provided by the yacht’s beam, which is almost twice that of a traditional yacht of the same length.

With a beam of 24,50 metres, the interior spaces can only be described as palatial. Despite the fact that there is no interior guest space in the yachts twin hulls, there is plenty of space in the decks above.

On the main deck, 4 large double cabins are lined up in the bow of the yacht, each with a private forward facing balcony. There is a fifth double guest cabin just behind the forward cabins, which despite not having the luxury of a private balcony, still enjoy fantastic views through large windows. The main deck also offers a large gym, as well as an entrance lobby, which could also be used as a second saloon. 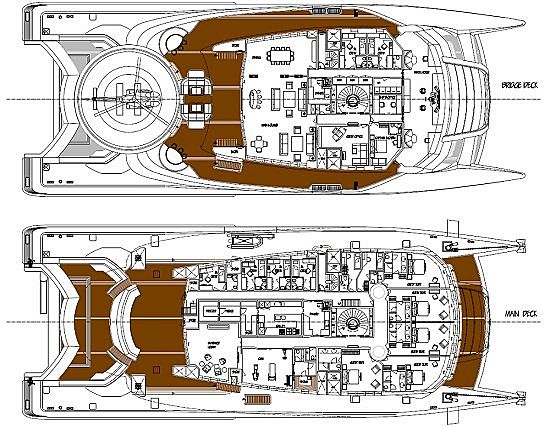 The remainder of the main deck consists of a central galley, and the crew accommodation, which is fully separated from the guest areas.

The bridge deck will feature the main saloon and dining area, which both open up to a large aft guest deck, which is connected to the helicopter landing area. 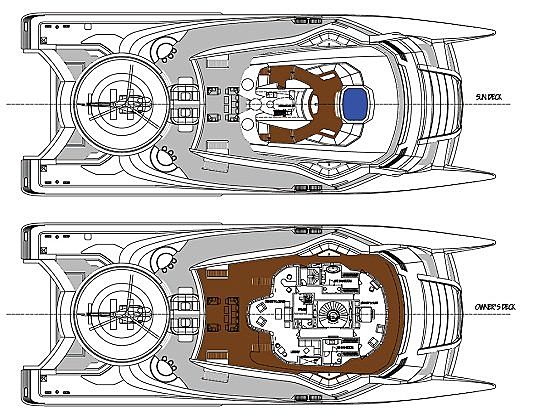 The owner will have his own private deck, above the bridge. A forward facing cabin is complimented by his and hers bathrooms, and a private saloon aft.

The sundeck on top features a Jacuzzi, as well as sunpads and a lounge area.