The Italian Sea Group has launched the 37 metre superyacht Nono, the fifth launch of the seven launches planned by the yard in 2014. Two more launches are scheduled to take place in the next few days. 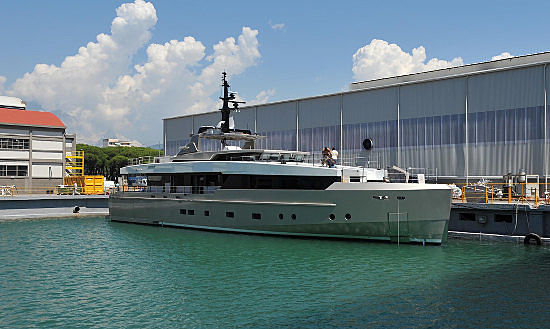 Nono is part of the new Impero Series by Admiral, designed by Luca Dini, with an interior design by the Admiral ‘Centro Stile’. She is a semi displacement raised pilothouse aluminium super yacht, designed and engineered for long distance travel, whilst maintaining a top speed of 20 knots.

Inside, Nono is especially spacious, and she features substantial headroom. Inside the main salon, opening sliding doors on both sides further contribute to the open space feeling.

The master stateroom is located forward on the main deck, and includes a large ensuite bathroom located aft, which is directly connected with two walk-in wardrobes, his and hers.

On the lower deck there are four large guest cabins, two of which are VIP’s.

Nono will be displayed at the next Monaco Yacht Show as well as the Fort Lauderdale Yacht Show 2014.