On the 17th of July Admiral Mariotti Yachts celebrated the launch of the first Admiral 54, Sea Force One. She is the first 54 meter superyacht build by AMY, the joint venture between CNL and T.Mariotti of Genoa. 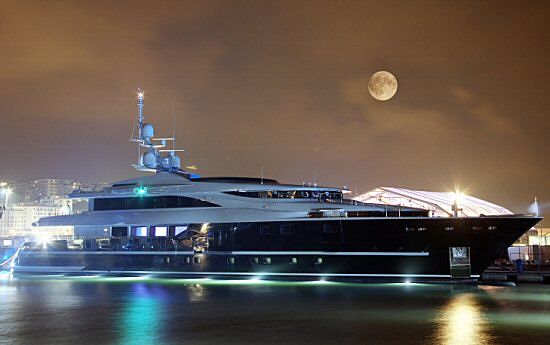 “In less than three years from its beginning, AMY today celebrates the delivery of its first yacht, while a 54 meter sister ship, recently purchased by a Middle-eastern owner, is under construction set for delivery in 2010”, said Marco Bisagno, the vice-president of AMY.

The M/Y Sea Force One, designed by Luca Dini Design, is a really unique ship. The hull is distinguished immediately by its color, shiny black, the silhouette of the ship is imposing but sinuous thanks to the lateral rounding off of the silver grey superstructure. The strong personality of the owner is evident in every aspect. Designed to accommodate 10 passengers in 5 cabins and up to 12 crew members, the yacht reaches 54 meters in length and expands over four decks.

The yacht is classed by both ABS and RINA. Not only the yacht received the RINA Green Star certificate, which assure compliance with the strictest regulations in terms of environmental protection, but also the new RINA Secure Yacht certificate. The Admiral 54 is the first yacht to obtain this very new certification, which assures safety on board through monitoring all areas on board and around the yacht.