As Admiral was putting the finishing touches to its latest launch, 65-metre Life Saga, we went aboard for an exclusive preview with owner’s rep and build captain Chris Delves. 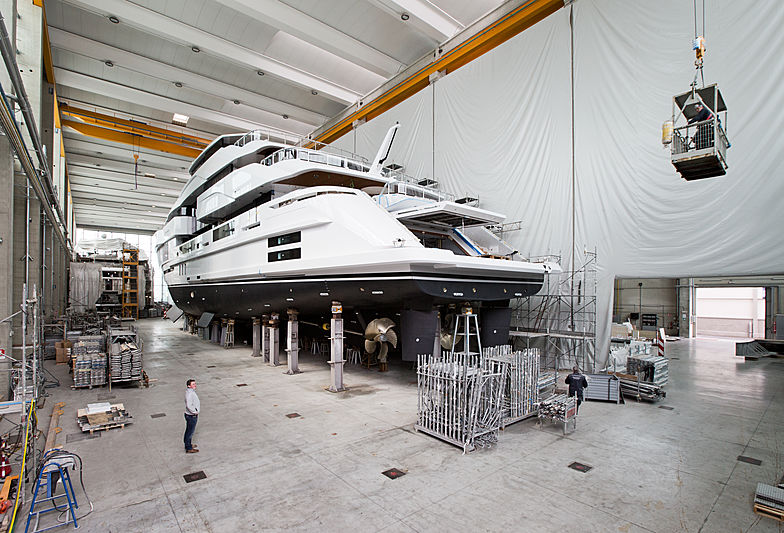 Photo: Justin RatcliffeIf the name Life Saga sounds familiar, it’s because her owner has a 42-metre Heesen of the same name. Often seen accompanied by the shadow vessel Mystere Shadow, they are just part of a stable of boats of various shapes and sizes managed by Chris Delves as fleet captain. The new Life Saga, however, represents a significant step up the ladder, both in terms of sheer size and because it is the owner’s first new-build project.

“We had been talking about a bigger boat for a couple of years before deciding to sign with Admiral,” says Chris. “I spent that time travelling around northern Europe talking to shipyards and sea trialling various yachts. We were looking for a pre-engineered platform and eventually settled on the Italian yard because they were the only ones willing to introduce major changes to the design to suit the owner’s needs.” 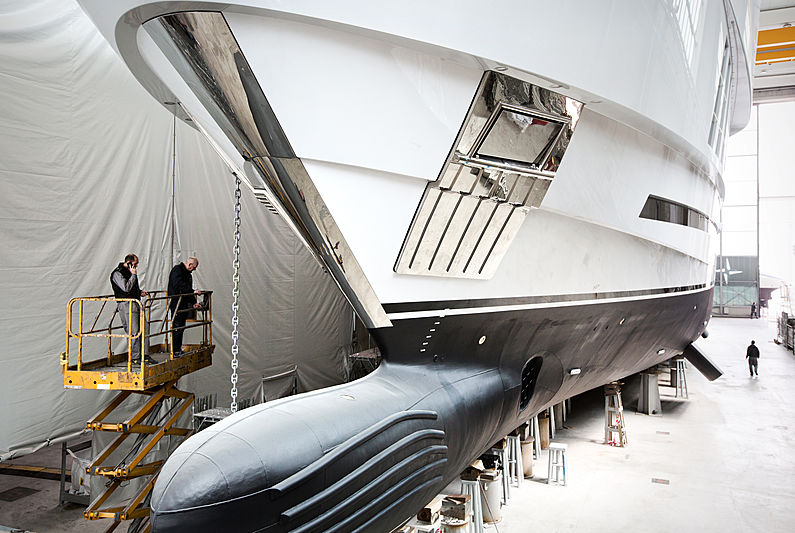 Photo: Justin RatcliffeThe latest Life Saga is based on Admiral’s C-Force platform with in-house naval architecture and exterior styling by Gianmarco Campanino. The signature double-height windows amidships bear an obvious family resemblance to Ouranos, the 50-metre Admiral C-Force launched in 2016, but at 1,150 gross tons the new yacht is altogether a more imposing vessel than its smaller cousin. Numerous modifications were made to the original concept and the owner’s team worked closely with Technical Marine UK to advise on the changes, and Alex Banning of SuperyachtsMonaco on the contractual side. 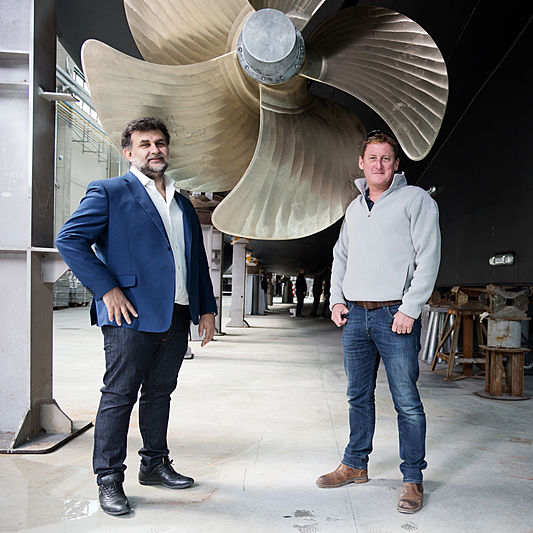 One of the first adaptations was the introduction of a portside tender garage between the engine room and beach club. With a shadow vessel to hand, tender space wasn’t critical, but Chris points out that “the owner loves his tenders and the idea is that when empty the garage can also be used as a chill-out space for the crew.”

The beach club itself houses a sauna, hamman, gym and – unusually – a hot tub. Instead of the standard fold-down transom platform, which is subject to wave slapping, the shipyard engineered a system whereby the hatch folds up and retracts into a housing under the sunbed on the aft main deck. 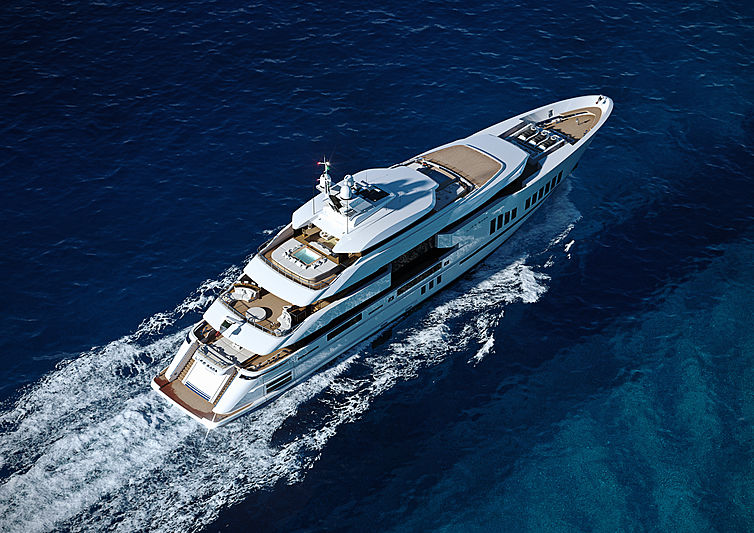 Photo: Admiral YachtsTender bays are usually full of trip hazards like fixed rails and locking pins. Chris had these removed and replaced with chocks that float on a bed of compressed air, which allow the 7.5-metre custom tender to be manoeuvred with one hand while the head of the gantry crane rotates so the tender can swivel round once outside to lie alongside the hull (the MOB tender and jet skis are stored in an open compartment on the forward main deck). A soft patch in the garage means heavy equipment can be easily removed from the two-tier engine room using the tender crane. 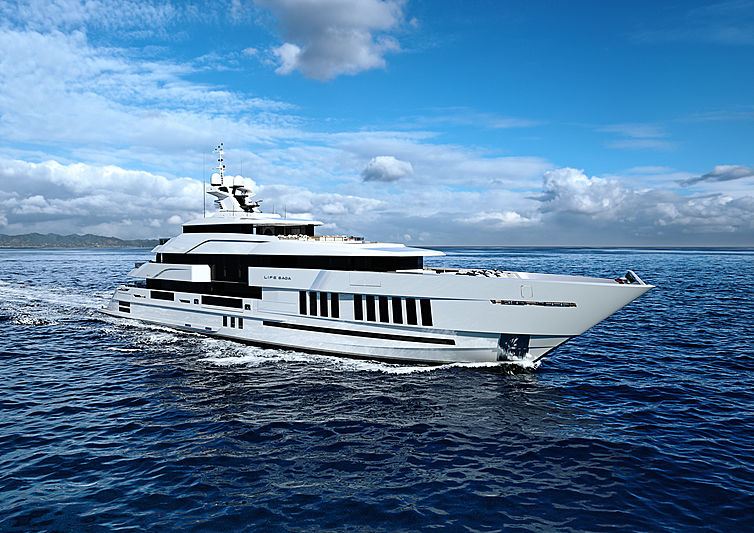 Photo: Admiral YachtsSilent cruising was a priority for the owner from the start and Dutch noise and vibration specialists Van Cappellen were engaged to ensure acoustic control. In addition to the standard damping and soundproofing measures, the two CAT 3152C engines are resiliently mounted on thick steel beams that wrap around the engine room bulkheads and ceiling, forming a closed circle that helps eliminate structural vibration through the hull. 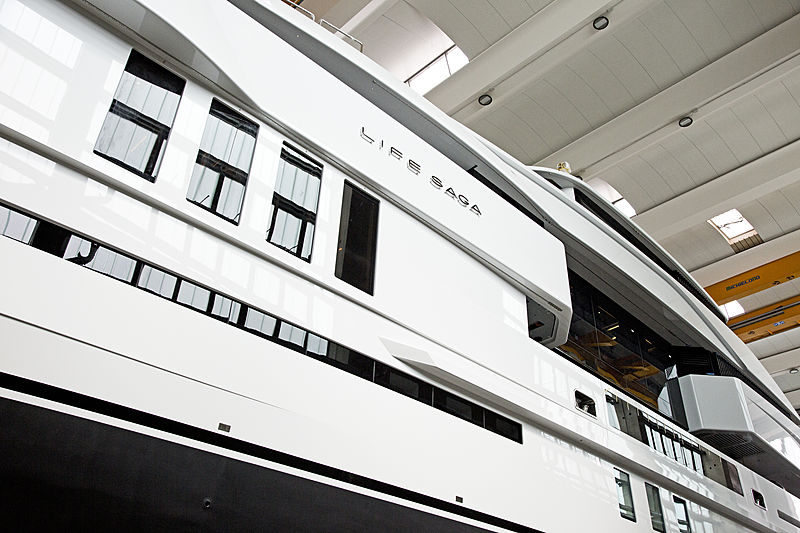 Photo: Justin RatcliffeEarly on in the design phase the galley was shifted from the main deck to the lower deck (and later swapped sides with the crew mess from port to starboard). This left space amidships on the main deck for a VIP suite with private lounge, which can be converted into two en-suite cabins by simply closing a sliding wall panel, and an airy TV salon and sliding glass doors that open onto the fold-down bulwarks. 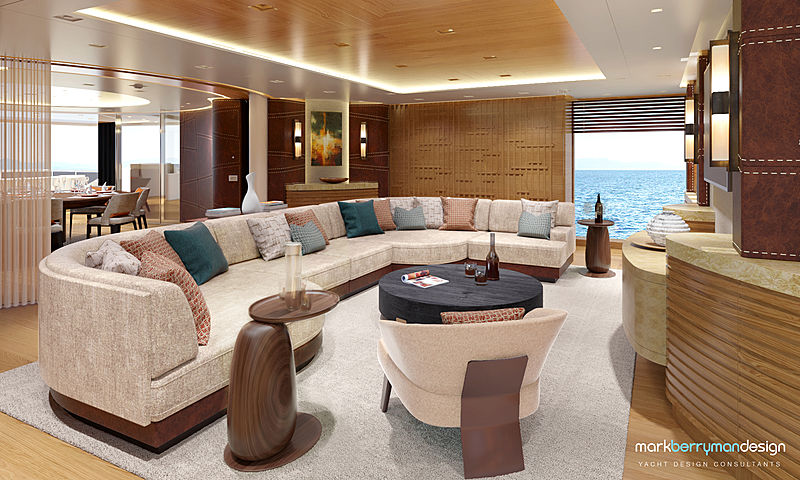 Photo: Mark Berryman DesignThe main salon is a semi-open space with full-height glass windows on both sides that can be partially lowered. Non-watertight, concertina-style glass doors fold away into side compartments so the salon opens fully onto the aft deck. The technical team at Admiral are particularly proud of the fact that there are no pillars supporting the upper deck overhang.

The master stateroom and owner’s office are on the main deck forward. This space also went through various revisions and the bathroom, originally on the portside, is now behind the bedhead. The legacy of this modification is that the kingsize bed is slightly off the centreline, but means the cabin is filled with light from the tall side windows on both sides. 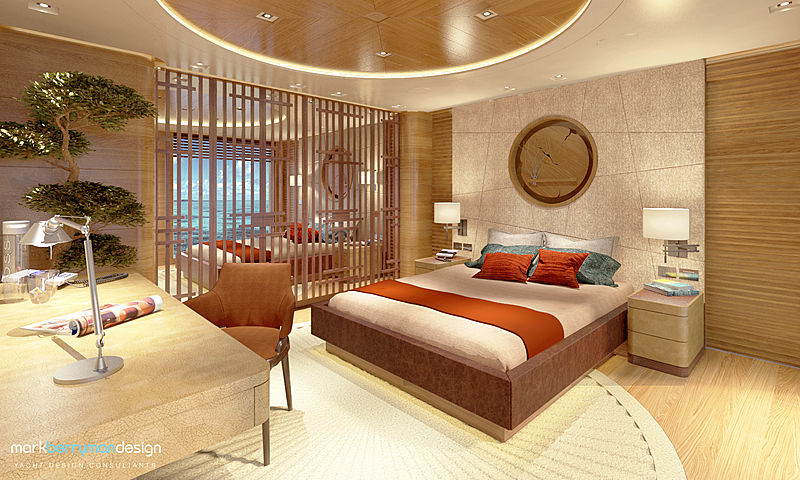 Photo: Mark Berryman DesignInstead of the conventional sky lounge aft of the lobby on the upper deck, there is a second master suite. Although the cabin itself is about the same size as the two guest cabins on the lower deck, the living area is huge and features a library-lounge, sushi bar and wine cellar, and a foosball table. A circular dining area furnished with a magnificent Fletcher capstan table sits between the salon and the open aft deck. Sliding curved glass doors mean the table can be inside or outside.

“The owner’s favourite word is ‘optimisation’ and he’s a big believer in multifunctional design, so he didn’t want a dining table inside and another one outside,” says Chris. “For the same reason, we didn’t specify margins in the teak decking around the exterior furniture, in case he wants to move them around.” 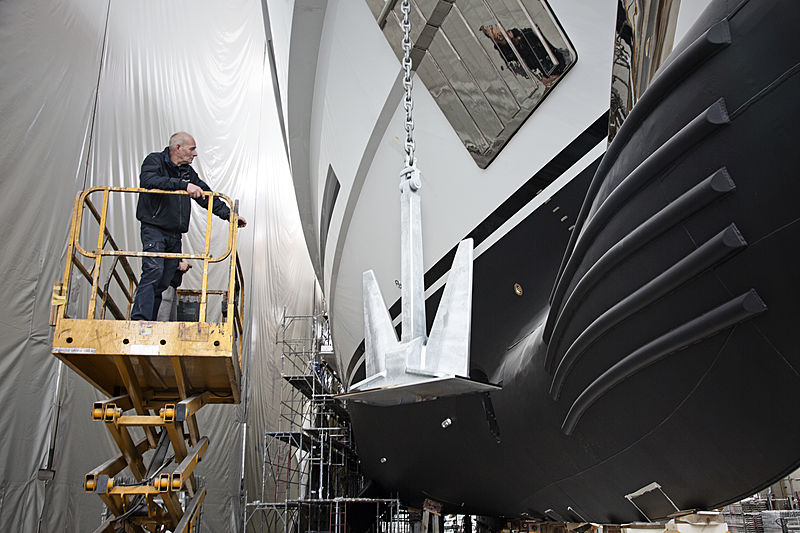 Photo: Justin RatcliffeThe most impressive alfresco area is the sundeck. The central champagne bar is designed as an open-air kitchen with BBQ, grill, oven and teppanyaki station, flanked on one side by a pole dancing stage and on the other by a wet-bar Jacuzzi. There is another hot tub on the open aft deck that can be filled and heated up to 40°C in just 40 minutes. 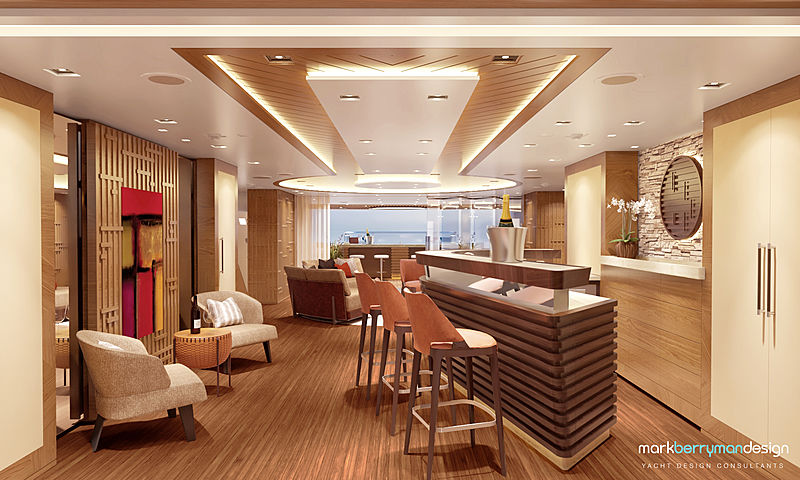 Photo: Mark Berryman DesignThe elevator, which travels only between the main and upper decks, does not appear in the original GA and was added as an afterthought, mostly for resale purposes as the owner has no intention of chartering the yacht.

The original space allotted to the captain’s accommodation was quite cramped due to a walk-around console in the adjacent wheelhouse. To increase the footprint of the cabin the wheelhouse corridor was pushed off the centreline and the Böning integrated bridge moved up against the windscreen. The bridge is still generous in size with comfy sofa seating for guests, a central chart table and a separate ship’s office. 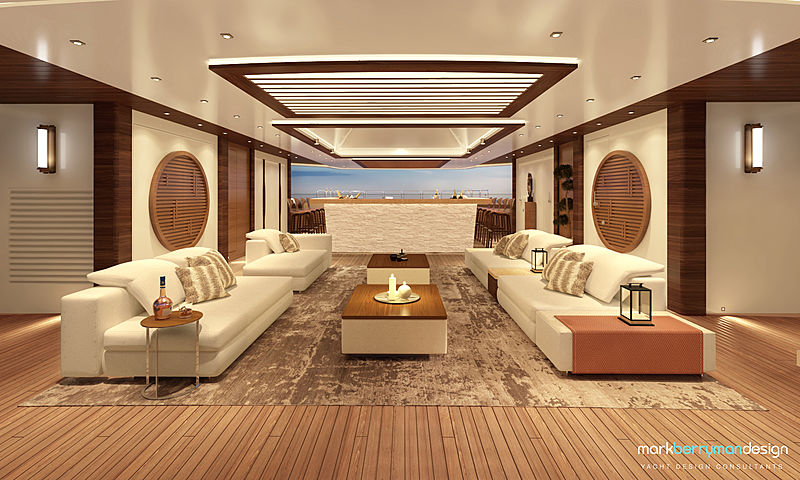 Photo: Mark Berryman DesignAs you would expect on a superyacht of her size and volume, Life Saga has an under-lower deck with extra cold and dry storage, refrigerated garbage room, laundry and linen store.

Interior designer Mark Berryman was brought in quite late to revise Admiral’s decor proposals. Anyone familiar with the British designer’s work will recognise his casually elegant style and faintly oriental motifs.

“Happily, the owner liked most of our favourite materials so there’s a lot of leather, oak, walnut and teak on board,” says Berryman. “We’re not big fans of high-gloss finishes, so the woods have a much more tactile satin finish that invite you to touch them.”

The warm wood tones are complemented by a variety of stone varieties from limestone and travertine to sunset onyx and emperador marble. Fabrics are supplied by top brands such as Hermes, Loro Piana and C&C Milano, while more exotic finishes include a crackle glaze, stingray leather and resin panels with solid wood inserts. Much of the interior exudes Berryman’s discreetly Japanese aesthetic, although in a more muted form because the owner didn’t want any bamboo. 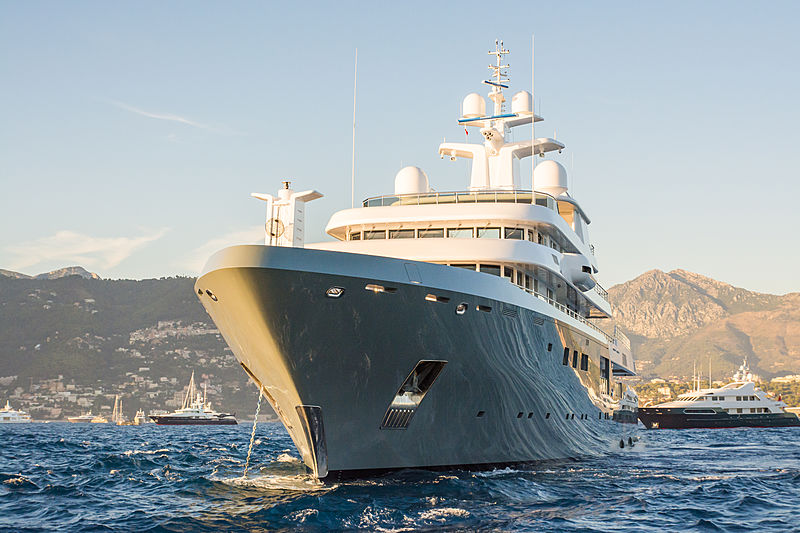 The decision to build with Admiral was based on the Italian Sea Group’s collaborative, owner-oriented approach and it is unlikely that Life Saga could have been built any other way. Together with the launch last year of 73-metre Planet Nine, Life Saga is an important milestone as the brand actively engages with the market for yachts above 500GT. Even before her delivery, Italian Sea Group vice-president Giuseppe Taranto credits Life Saga with helping to bring in contracts for two new 75-metre projects. 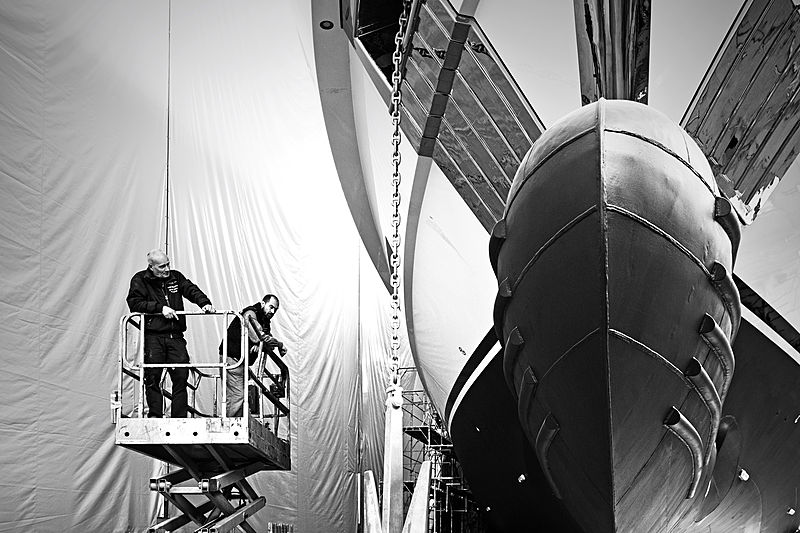 Photo: Justin RatcliffeBut as delivery day rapidly approaches, Chris’ first priority is to encourage his boss to make the most of all the available volume aboard his new yacht:

“He definitely has a lot more space to use,” concludes the owner’s rep. “He hardly ever used the upper decks on the old boat, which is much smaller, and in my ten years as captain I’ve never seen him in the Jacuzzi. Now he has three!" 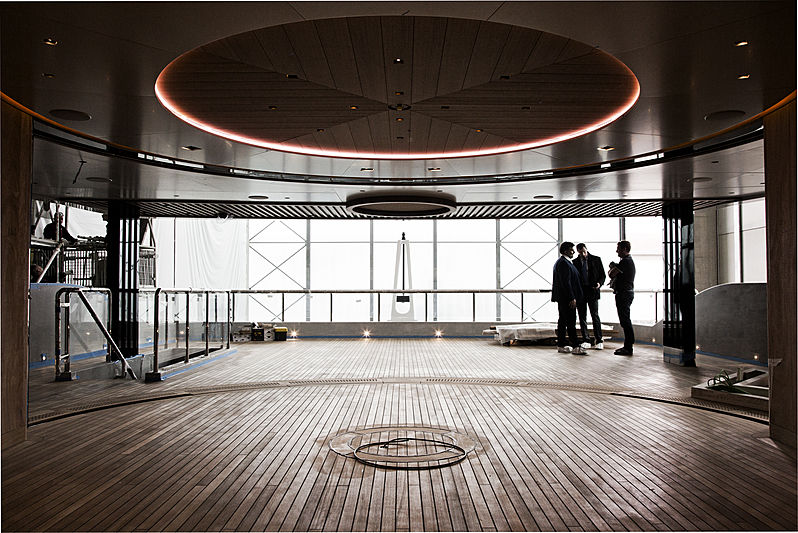