Poised for Leadership
Perrone Da Zara’s hiring to the position by Vicem Yachts, with the support of Sanko Holding – Vicem’s parent company – reflects their commitment to the brand, and strong belief that Vicem will emerge as a market leader in the yacht building sector. 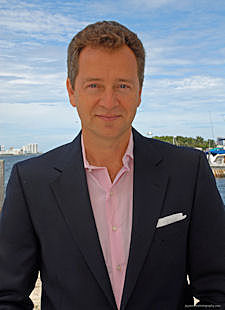 “Vicem is a company with tremendous potential that has made great strides in the marketplace. We recognized this potential and have invested in the right people to bring Vicem to the next level in the industry,” said Zeki Konukoglu, Vice President of Sanko Holding. According to Konukoglu, the first steps were taken with the hiring of two highly respected professionals to solidify Vicem’s production operations -- Bob Riemens, Project Manager for Vicem’s Megayacht division, and Bruce Livingston, Vicem Production Director. Konukoglu continued, “Hiring Mr. Perrone Da Zara is an important step toward achieving our goal. He brings a new approach, vision and philosophy to bolster operations and expand Vicem’s business and reputation.”

Perrone Da Zara will report to Vicem’s Board of Directors, with Sebahattin Hafizoglu as the Chairman of the Board. “Alberto has a fresh perspective and wide range of expertise developed over the years across many aspects of yacht building, from design and architecture to service, sales and marketing,” said Hafizoglu. “He brings a lot of energy and enthusiasm to the job, and is ready to implement strategies to strengthen all areas of the business, and grow the recognition of the Vicem brand in the marketplace,” Hafizoglu added.

New CEO Brings Comprehensive Experience and Global Perspective
The Italian-born Perrone Da Zara graduated in 1992 as a Naval Architect and Marine Engineer from the University of Southampton (United Kingdom). Afterwards he went to Germany to intern with world-renowned architect Gerhard Gilgenast, designer of such notable yachts as Octopussy, Shergar and Ronin.

Perrone Da Zara moved to Argentina in 1992, where he spent four years designing and building racing sailboats for Billoch Yacht Design, and Patriot Yachts, for which he was co-partner. This experience led to his post with California-based Alan Andrews Yacht Design, designing large performance racing sailing yachts for competition in the former “Whitbread Round The World Race,” known today as the “Volvo Ocean Race.” Perrone Da Zara was involved in the design and production of ultra-light displacement boats (ULDB) for competition on the PHRF and IMS circuits, including a 70’ ULDB Turbosled that finished second in the 1999 Transpacific Yacht Race.

That same year, he moved to Miami, Florida where his expertise with state-of-the-art engineering and design of high performance vessels landed him at Magnum Marine – builder of innovative luxury offshore performance powerboats. Perrone Da Zara was primarily involved with production and development during his three years with the company.

In 2002, he joined Ferretti Group USA/Allied Marine, the U.S. arm and dealer network of one of the world's largest yacht builders. Having started as a customer service manager for the Group, Perrone Da Zara’s passion for the luxury motor yacht sector helped him quickly rise up through the ranks across the Group’s various lines. He served as Riva’s U. S. Product Manager, as Vice President of Sales & Customer Service for Bertram Yachts, and as U. S. Director of Sales for the Custom Line, Ferretti Yachts and Mochi-Craft brands – the position he held prior to joining Vicem Yachts.

“As CEO of Vicem, I am excited to be in a position where I can collectively apply the knowledge and business development capabilities I have acquired over nearly two decades working in virtually every major aspect of the yacht building industry,” said Perrone Da Zara. He further commented, “I share the same level of commitment Vicem and Sanko have to growing this company, and look forward to leading Vicem to becoming a world leader in the luxury motor yacht sector.”

Perrone Da Zara, who is fluent in five languages (English, Italian, Spanish, German and French), will be moving with his wife and two children to Vicem’s Istanbul headquarters in October.