British solo sailor, Alex Thomson has smashed the single-handed monohull transatlantic record, by more than 24 hours, crossing the finish line at Lizard Point, off Falmouth in Cornwall, in time to get back for the London Olympic Opening ceremony. The 38 year old sailor crossed the line at 17:17GMT (18:17 BST) setting the new time at 8 days 22 hours 8 minutes, beating the previous record, subject to ratification by the World Sailing Speed Record Council, which had been held for 10 years. 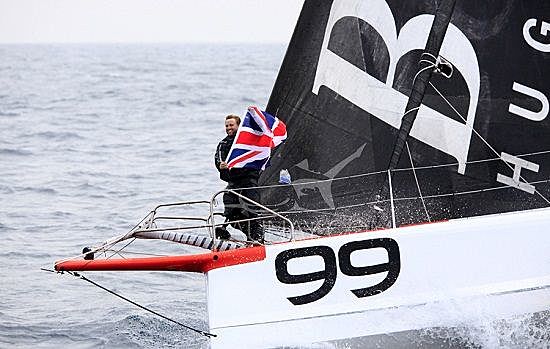 “It has been a long few days,” said Alex. “The first half from New York was great with weather conditions in our favour, but things started to slow down the closer I got. But the wind has held out this morning and it’s so fantastic to have broken this record.”

Alex set sail from New York on July 17th at 19.09GMT to cover 2800 nautical miles in a quest to break the record for what is officially known as the ‘West to East Ambrose Lighthouse to Lizard Point Under 60ft Single-Handed Monohull Record, Male’, which sat at 10 days, 55 minutes and 19 seconds, and was set by Swiss sailor Bernhard Stamm 10 years ago.

His secondary aim was to get home in time for the 2012 London Olympic Games Opening Ceremony in order to support Chairman and good friend, Sir Keith Mills.

“When I set off I had no idea if I was going to be able to do it. And it has been hard. Lack of sleep, broken instruments on the boat and constant exposure to the elements has really taken it out of me. But it’s such a good feeling to have beaten it by such a great margin,” said Alex.

He is one of three British competitors who will take part in the non-stop, solo, unassisted round-the-world yacht race starting in Les Sables d’Olonne in France, on November 10th. Currently only 50% of attempts to complete the race have been successful in the race known as the ‘Everest of sailing’.