The baptism of Alexia Barrier's 4myplanet took place on Saturday, two days before her lunchtime departure on Monday 11 January from Monaco on a Scientific World Solo Tour to share information on the worsening condition of the global environment. The heavens rained as the boat was blessed and – eventually – was doused in Champagne. 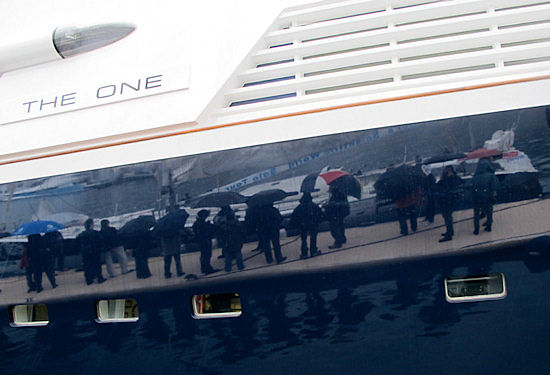 After some seven attempts by local children to smash the bottle against the anchor, the message from this bottle was clearly that you can start making a change by small acts (ie not leaving broken bottles in the port ;-)) and Alexia popped the cork, sprayed the hull and thus reduced her own impact on the environment.

Contrasting with superyacht The One, moored alongside, Alexia's accommodation is sparse, however she does share some of the benefits of the superyacht world, from a powerful vision system, for nighttime or foul weather, provided by International Seakeeper's Society founding member Doug Houghton's company, Current Corporation, to a 200 carat blue topaz, loaned from Monaco-jeweller Axel Mees' Celebration range, to be raffled off raising money for both FightAids Monaco and the project's chosen children's project.

The Prince Albert II Foundation and Monaco's Oceanographic Museum are also behind the adventure, together with the support of the Yacht Club de Monaco where Alexia honed her sailing skills in the youth training program.