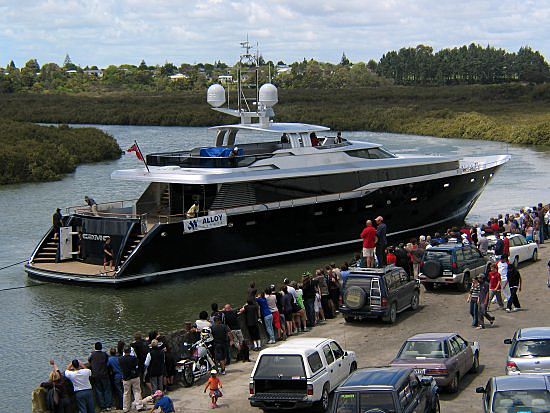 Managing Director Tony Hambrook commented that the Dubois Naval Architect designed Como is the largest motoryacht built at Alloy Yachts. She has an 8.5m (27.9ft) beam, draft of 1.9m (6.2ft) and displaces 214 tonnes. The interior design is by Redman Whiteley Dixon.

The engine room houses two Caterpillar C30 1550hp engines. Two Caterpillar 55kw generators are built-in together with one 55kw Mastervolt shore power converter. The 6.0m tender is stored in the lazarette and is launched through a watertight door on the port side. The 4.3m crew tender is stored on the foredeck with a davit for launching. A docking station is fitted on the starboard side of the aft cockpit.

The main deck has an aft cockpit and an alfresco dining area with a sliding sunscreen. Forward is the main saloon with bar aft and separate dining area with seating for up to 10 guests. Large wrap around windows provide expansive views.

Ahead of the dining area and on a half level above the main deck is the bridge. A stairway leads from here up to the flybridge which can also be accessed from the aft cockpit. This expansive area includes a bar, barbecue and dining for up to twelve guests under a fixed sun awning. There is also extensive built in seating and a large sunpad.

Forward of the guest lobby on the starboard side of the main deck is the owner’s lobby leading to the master cabin with large walk in wardrobe and two ensuites with central shower. On the port side of the master suite is a lounge area and owner’s study.

The yacht has a Naiad stabiliser system plus bow and stern thrusters and the latest Alloy Yachts designed and built passerelle.

Como is built to Lloyds classification and complies with the Large Yacht Code. She is flagged in the Cayman Islands.