The 34m (111ft) tri-deck expedition style motoryacht commenced construction at Alloy Yachts in September 2005 and was launched in April 2007. The yacht was commissioned by a prominent New Zealand businessman and named VvS1 (a term used in the grading of diamonds). 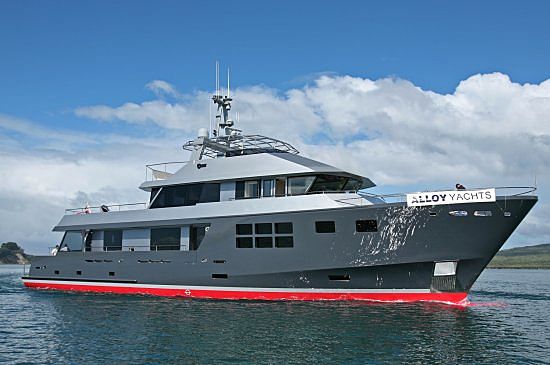 VvS1 is built in aluminium and complies with the Lloyds Register SSC Rules and the Large Yacht Code.

The yacht is powered by two Caterpillar engines each 475 hp (354 kw). Two Caterpillar 51kw generators operate the ship’s onboard systems. VvS1 is fitted with active roll stabilisers and carries 34000 litres of fuel. She cruises at 11 knots and has an extended range of 4300 nautical miles. Outside docking stations are located on the port and starboard bridge wings and a further station aft on the bridge deck. Fresh water storage capacity is 7,000 litres and is supplied by two water makers, which produce 13000 litres per day.

Two tenders are stored on the bridge deck aft. One of these is 6.5 metres and powered by a 150hp outboard. Both tenders are launched by the ships hydraulic crane.

The interior design has been developed by the owners, Gregory C Marshall and Alloy Yachts design office. The interior timber joinery is American white oak panels with a white stain, and finished with the grain exposed and slightly raised. Wenge cabinetry is featured throughout the guest areas. The bamboo interior soles are laid in 90mm planks with wenge inlays and matt finished.

The saloon and dining area for eight guests is on the main deck. The galley is on the main deck between the dining room and aft deck dining area. Meals can be served directly to the interior or exterior servery bars fwd and aft of the galley. A Teppanyaki bar is located on the fly bridge. Aft on the bridge deck is a full sized gymnasium and cinema. Dive equipment and compressor are located in the lazarette.

VvS1 is flagged in the Cayman Islands.