The 52m (170ft) sloop Red Dragon commenced construction at Alloy Yachts Auckland New Zealand in March 2006 and was launched on December 13, 2007. Contracted by international yachtsman, Guy Ullens and his wife Myriam, Red Dragon is the fourth yacht over 50m built by Alloy Yachts. She has a beam of 10.2m (33.5ft), draws 4.9m (16.1ft) and a displacement of 354 tonnes. 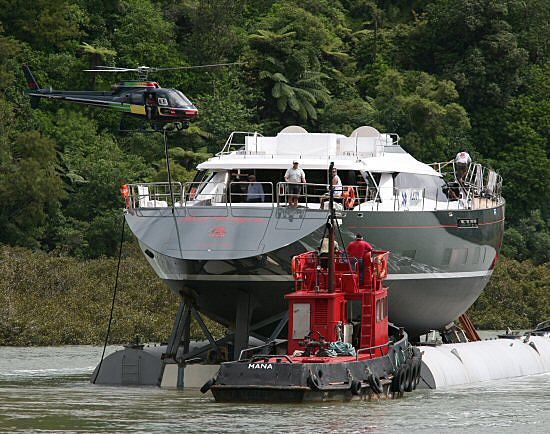 Immediately after the launching, Guy Ullens, who among other interests is a leading international art collector, expressed delight at the execution of his new yacht. “Alloy Yachts has a culture of excellence, which is world class,” he said. “The yard is producing exceptional pieces like this. Red Dragon is a work of art.”

The design from Dubois Naval Architects is for a high performance aluminium sloop which represents a world luxury cruising yacht with the ability to stay operational for long periods at sea without outside assistance.

The Wilmotte & Associates designed interior has a large saloon with formal dining area for up to 10 guests. The style includes a light contemporary timber interior.

The topsides are finished in anthracite grey with a white superstructure.

Guest accommodation provides for an owner’s suite and three guest suites. Also included is a separate gymnasium with Pullman berth and en-suite. Forward, the crew layout has five cabins all with en-suites for up to 10 crew.

The comprehensive flybridge above is accessed from the cockpit. Red Dragon is fitted with a 62.5m (205ft) carbon fibre mast with a fully battened in-boom furling mainsail. Sails are handled by 11captive and six vertical winches. The entire winch package was designed and built by Alloy Yachts.

The main engine is a C32 1400hp caterpillar and she is fitted with two 90kW Northern Lights generators. Two water makers each supply up to 16000 litres per day. Bow and stern thrusters assist maneuvering in confined space. Her range under motor is approx. 5900nm at 10 knots.

The Alloy Yachts SeaTouch system is installed with six touch screen monitors throughout the yacht to indicate system and alarm status. The CCTV operates with four cameras located throughout the yacht. She is built to Lloyds Classification and complies with the Large Commercial Yacht Code LY2. 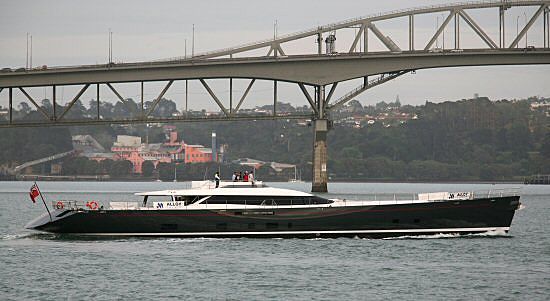 After the launching pontoons were removed, Red Dragon immediately passed maneuvering trials on Auckland’s Waitemata Harbour and then had the mast stepped.