Lazzarini Design Studio has announced the launch of a new concept, Pagurus. Solar-powered and coming in at 25-metres, the “amphibious catamaran” draws its power from both sun and water. 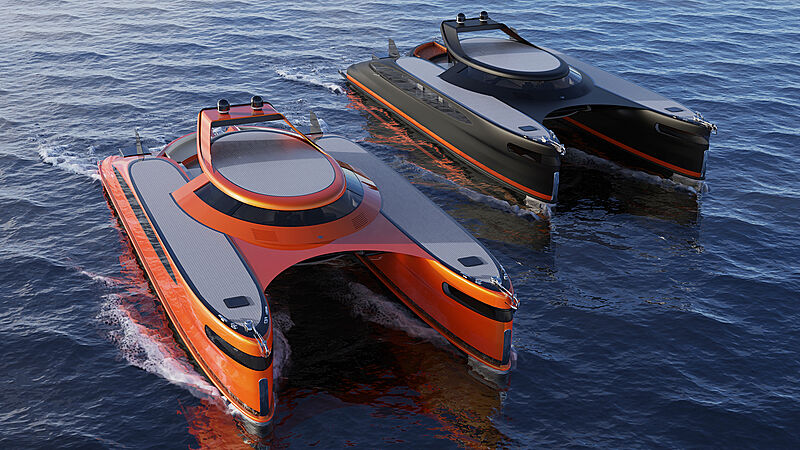 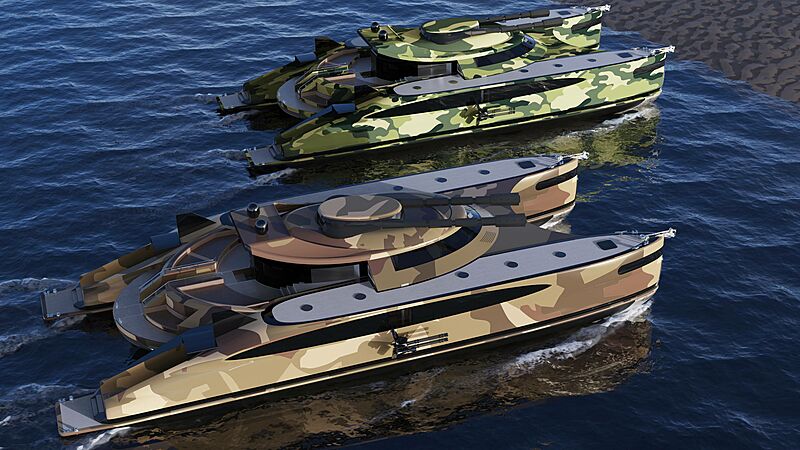 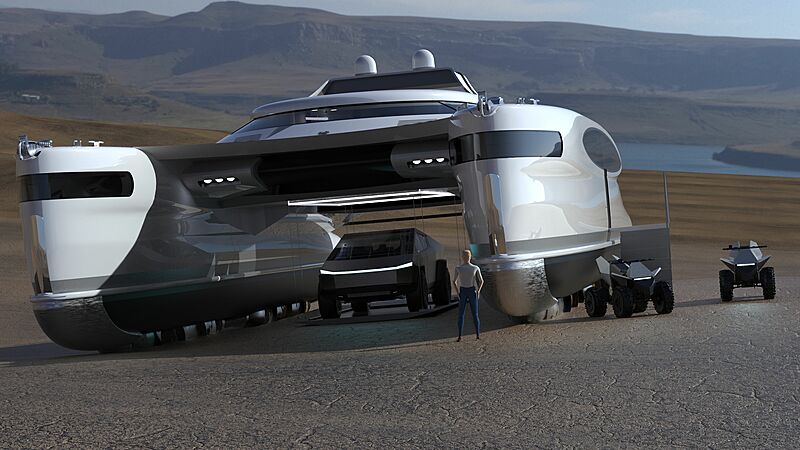 Photo: Lazzarini Design Studio Conceived initially as a military vehicle, the name Pagurus derives from the Latin word for crab, hence the crab-like shape of the catamaran. 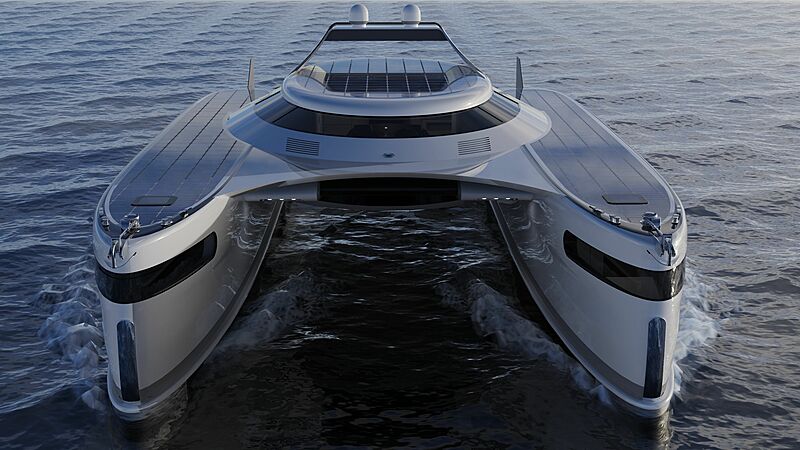 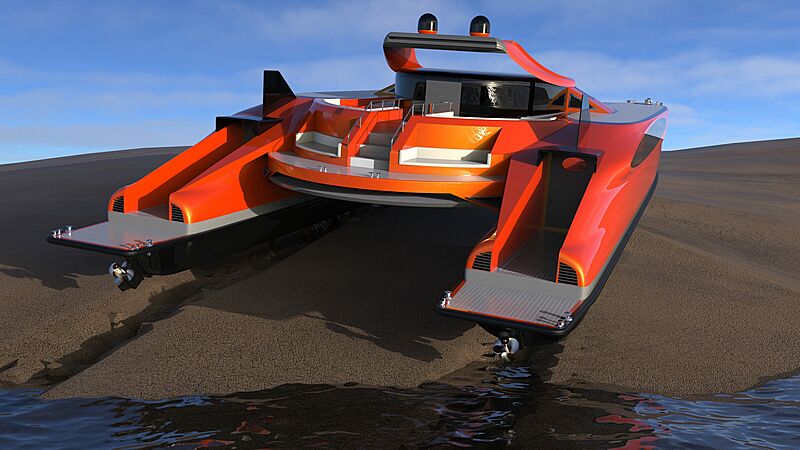 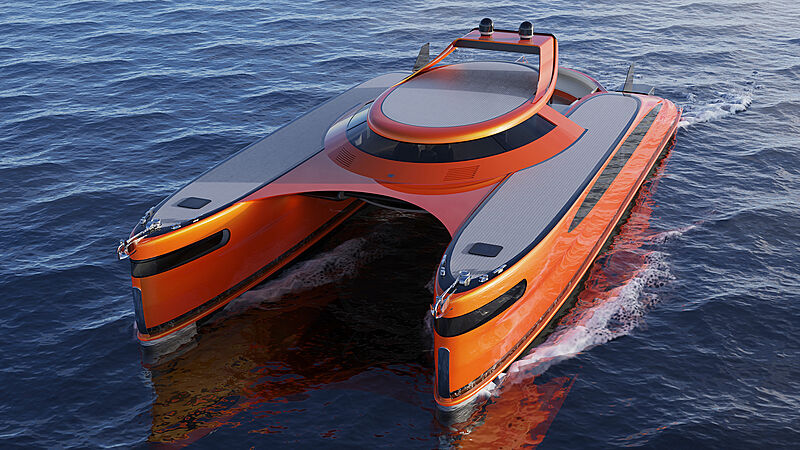 Photo: Lazzarini Design Studio Nature-inspired concepts released by the studio in the past year, including 2020’s shark-inspired 153m Prodigium and the swan-shaped 137m Avanguardia concept. 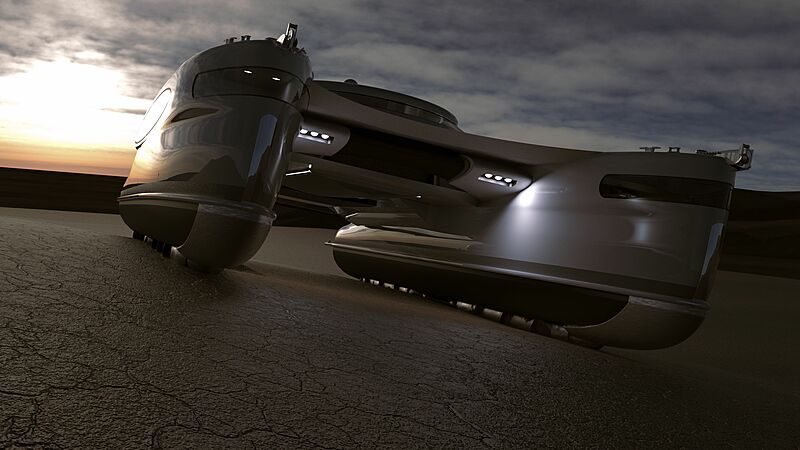 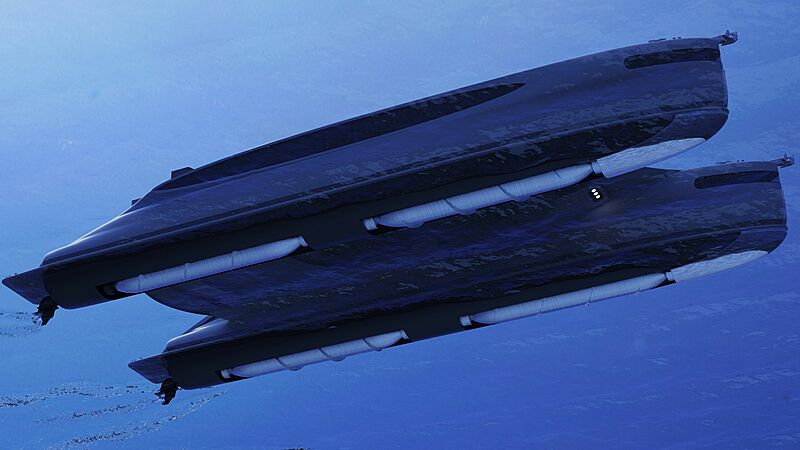 Photo: Lazzarini Design Studio To stiffen and reinforce the main body, a bridge steel structure connects each side to the other. The twin steel conceived hulls can be configured with up to three bedrooms on each side. 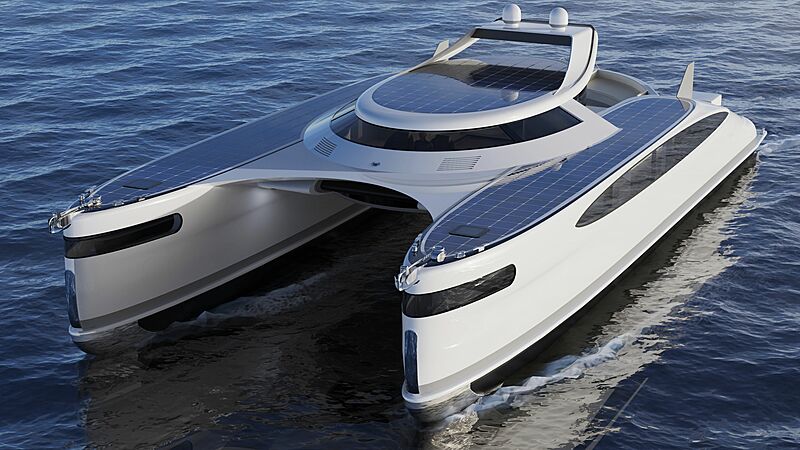 In total, Pagurus  can accommodate up to eight passengers plus four members of crew. The yacht subdivides the living spaces in two side hulls, connected to each other through a bridge tower deck station. In the immersed part of the yacht, the hulls are designed with a recess space that guests on each side two 6.5-metre steel cylinders, each one with a helical spiral flange like the thread of a screw. 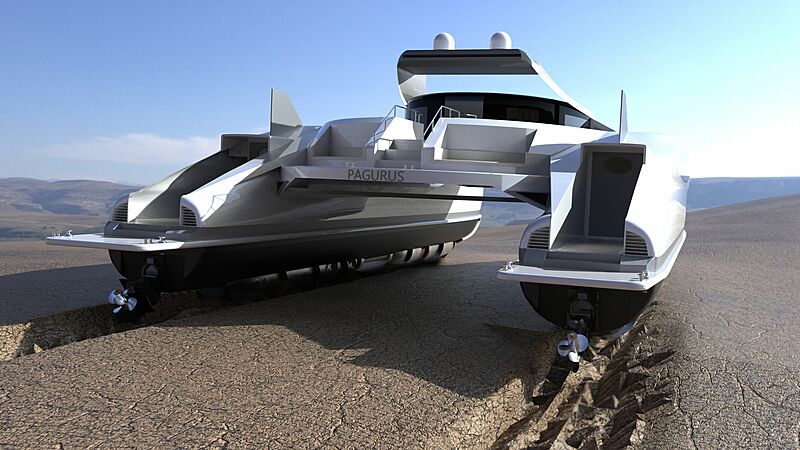 Photo: Lazzarini Design Studio The central part of the yacht features a crane platform, which is connected through four electric winches that can load and unload various objects, including an off-road vehicle. 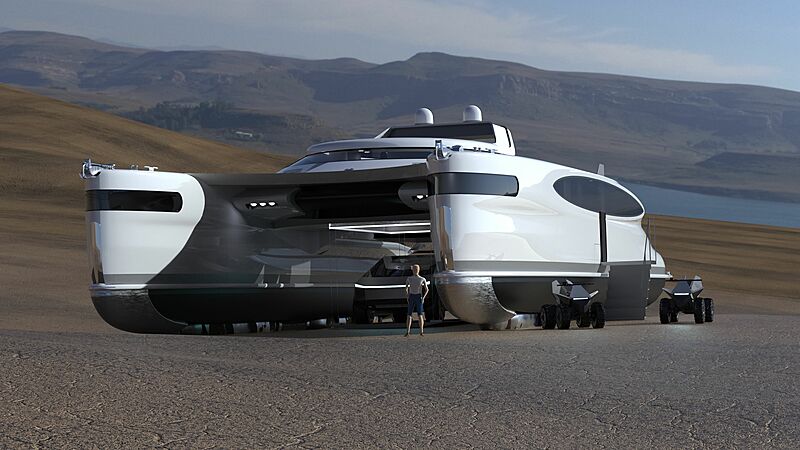 Photo: Lazzarini Design Studio With the water friction the screw cylinders generate, energy is made available to recharge the yacht batteries while sailing. The cylinders are moved from an independent engine, each one connected to a transfluid transmission are able to generate motion in water (5 knots) and simultaneously energy. 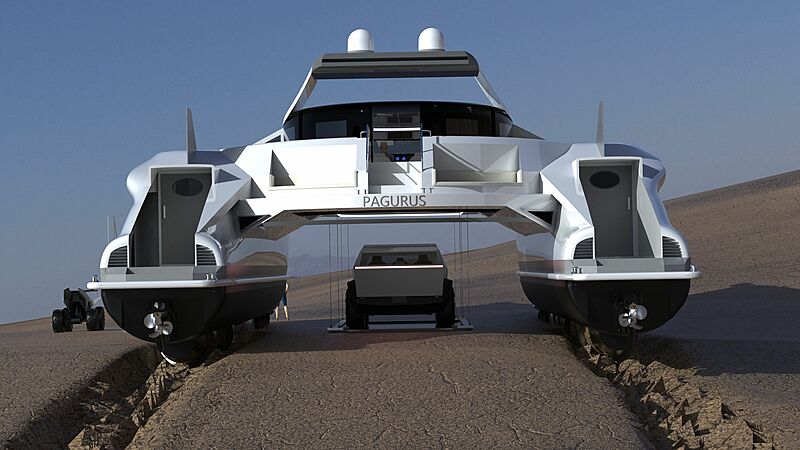 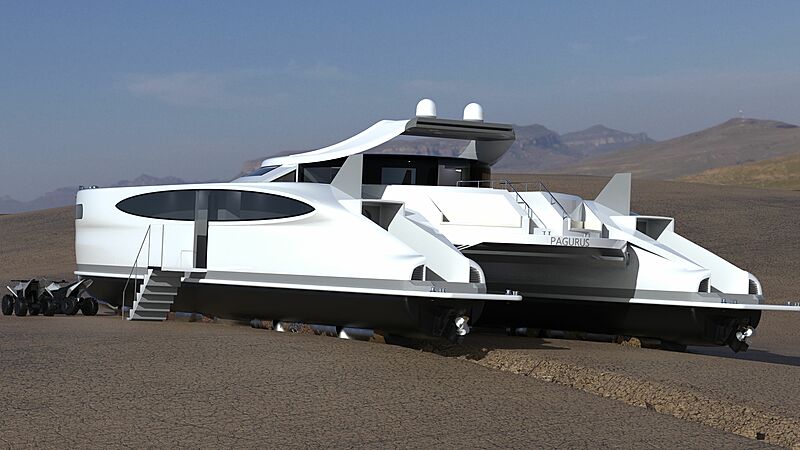 Photo: Lazzarini Design Studio Normal sailing propulsion happens on the new yacht concept via dual propellers stern drive coupled with twin 890hp diesel engines capable of moving the Pagurus to an estimated top speed of 24 knots. When the Pagurus reaches land it can increase its draft by lowering down the rotating cylinders to transform the catamaran into an amphibious vehicle, able to move on sand or mud terrains to speeds of up to 30kmh. 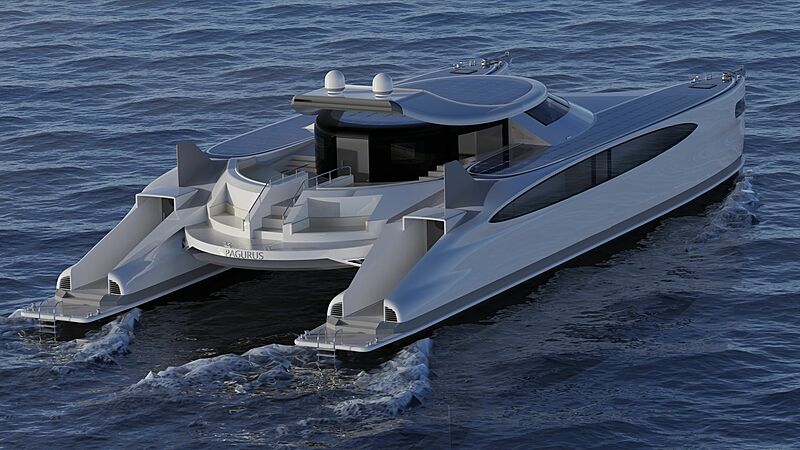 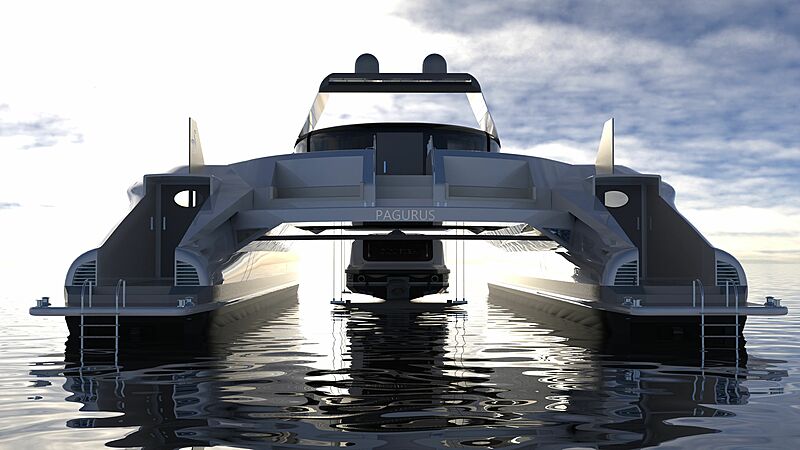 Photo: Lazzarini Design Studio Pagurus can be built on demand from a starting price of €6,580,000 for a carbon version with a twin-jet drive, which can reach 32 knots. It can be built for a price of up to €24,000,000 for the amphibious ‘Crabmaran’ version with reinforced steel.

12 of the most radical superyacht concepts seen in 2020