A sharp start was the order of the day in Porto Cervo at the 2011 Maxi Yacht Rolex Cup. After yesterday’s Mistral-inspired abandonment, this morning’s racing commenced at a prompt 10:30 CEST. With wind speeds predicted to rise dramatically across the day, Principal Race Officer Peter Craig warned: “It is an early start, or no start.” A flying start it was. A short and exciting coastal course of approx. 23.5-nautical miles was organised for all four classes: Mini Maxis, first starters, followed by the Maxis, Wallys and Supermaxis. 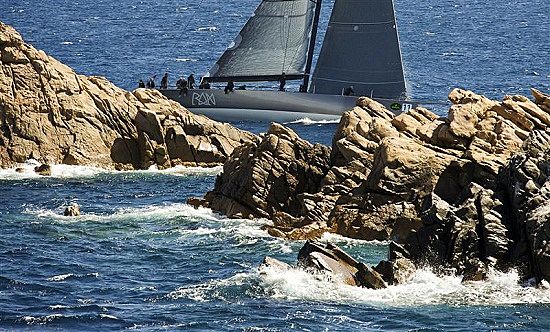 A decision greatly appreciated by all involved: the 47-strong fleet initially headed north of Porto Cervo round the Monaci outcrop before a ten-nautical mile tight, but downwind leg south past Mortoriotto island, round Soffi, and back up towards the finish off Porto Cervo. Conditions remained on the right side of testing. At the start, the breeze averaged between 23-24 knots, rising to 28 knots as the leaders hit the first windward mark.

The short course ensured a competitive challenge in all categories. Today’s winners included two of last year’s overall victors: Niklas Zennström’s Rán 2 (GBR) in the Mini Maxi World Championship and Claus-Peter Offen’s Y3K (GER) in the Wally division. Other celebrating crews were: Highland Fling (MON) in the Racing Maxis; DSK Pioneer Investments (ITA) in the Racing/Cruising Maxi division and Nilaya (GBR) as the top Supermaxi. The fastest yacht on the water was the 100-ft Maxi Esimit Europa 2 (SLO), finishing the course in a rapid 1:45.36. Today’s featured division is the Mini Maxi Rolex World Championship.

The winning habit is clearly hard to kick. Niklas Zennström’s 72-ft Rán 2 (GBR) is defending champion in the Mini Maxi Rolex Worlds and has famously claimed a second successive triumph at the Rolex Fastnet Race. Heading into the first race at the Maxi Yacht Rolex Cup, anyone finishing ahead of Rán 2 would have had cause for celebration. Nobody did. Leading almost from the start, Zennström’s crew finished the course four minutes ahead of her nearest rivals - Andy Soriano’s Alegre (GBR). On corrected time it was Sir Peter Ogden’s 60-ft Jethou (GBR) which claimed second place. A terrific effort from one of the smaller Mini Maxis in attendance. With places in the coastal races scored in at a 1.5 multiple, this could prove a significant victory for Rán 2 as the upcoming windward/leewards are graded at one point per place.

Adrian Stead calls the tactics on Rán 2. He had some tough decisions today. “When you are the lead boat on the water, you’re the one that makes the decision first,” he explains, “and it is easier for the people behind to say ‘look that what’s happening, we will match them’. However, we had some good spinnaker changes and made a key jib change when we needed it.”

“It was a tricky race for us,” continues Stead, “but we came out of it well. The Race Committee have had a difficult task looking at the weather forecast. Yesterday was unsailable and they made a good call then, and a brilliant job getting a race in today before conditions became too extreme.” 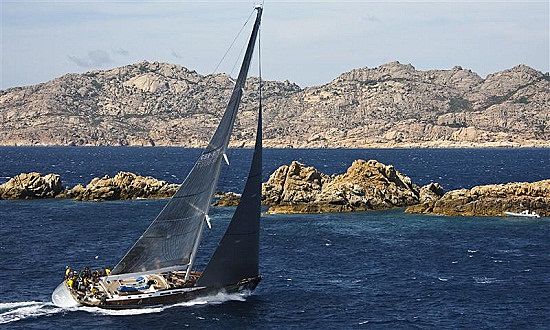 Jethou has her own expert tactician. Step forward Brad Butterworth. “It is pretty hard for us to beat Rán,” admits the Kiwi who is a keen judge of competitiveness, “but we had a very good race, hitting 23-24 knots at one time.” Jethou made a fine start. “We were on the right hand side by the committee boat,” continues Butterworth, “we struggle to start fast down the line because being a smaller boat we get rolled over pretty quickly, but we started to windward and that worked out well, especially having a nice right hand shift all the way into the layline.” Owner Sir Peter Ogden was equally enthusiastic about the day’s racing: “It was an exciting race, no damage was done and we were right in amongst it. Hats off to the Race Committee for setting this course, we got wet and it was very exhilarating out there.” Jethou enjoys the stronger winds. “When we get light air, Alegre will disappear,” admits Ogden, “and Rán are hard to beat, they are a fully professional crew, we are mainly an amateur one.”

For Alegre, Rán 2’s closest rivals in 2010, third place is a springboard for the coming races. “It was a classic Sardinian day, good to sail a windy race. We did some good things and know what we can work on,” explains tactician Francesco de Angelis, “overall it was a positive race for us.” Alegre will undoubtedly be in the mix in the coming days.

Sail issues meant George Sakellaris’ 72-ft Shockwave (USA) had to settle for fourth place. It was a more positive day for two Italian crews. Riccardo de Michele’s H20 (ITA) will be delighted with a fifth place showing, the first of the Racer/Cruiser Mini Maxis, shortly ahead of Aleph (ITA). Onboard the 61-footer is the charismatic Vasco Vascotto: “It was a great day, everything looks good on our boat, when you are still alive in nearly 30 knots of breeze, you know it is a good race! We were lucky that the wind didn’t increase.” Vascotto’s Twitter feed was updated regularly during the race. Was he able to bark orders and entertain his legion of followers at the same time? The veritable multi-tasker. “It wasn’t me doing the tweeting,” he jokes, “but I have someone doing it, keeping all of our fans updated!”

Alexander Schaerer‘s 67-ft Caol Ila (USA) may not have ambitions to win the Mini Maxi Rolex Worlds but she is far from prepared to simply make up the numbers. Brett Ellis, part of the afterguard, explains: “For us it went really well, we managed to hold our position up to the top end of the course before we took off down the coast. Despite not being a full-on performance boat, it is still nice to have some speed. We had no breakages, kept it conservative and came through the day in one piece. We had an interesting tussle with Stig and were probably in front for half of the course, although they snuck around inside us at the bottom and finished a boat’s length ahead of us.” The proverbial race within a race.

Challenging conditions are again forecast for tomorrow. The Mini Maxi fleet is scheduled to take part in windward/leeward racing and that should throw up some new tactical headaches. Elsewhere, it is coastal racing on the agenda, and some interesting rivalries developing. Esimit Europa 2 and Highland Fling have the Maxi Racing division all to themselves. Quite literally. Igor Simcic’s crew were faster on the water today although Sir Irvine Laidlaw’s Wally-hybrid has the corrected time advantage. In the Wally division, Y3K took today’s bullet but cannot rest easy knowing the likes of Magic Carpet 2 (GBR) will sail her close. It is an open field. The same goes for the Supermaxi and Maxi Cruising/Racing division categories. Tomorrow should provide a clearer picture. Weather permitting.