When Sanlorenzo first proposed an asymmetric layout for its SL102 model in 2018 it caused something of a stir. The Italian builder argued that although symmetry makes hydrodynamic sense underwater, it is much less important above the waterline unless you’re looking to break speed records. That first Asymmetric model proved a hit with clients and Sanlorenzo has now expanded the concept to other yachts in its planing fleet, including the new SL90/A and SL120/A, Stella, that made their debut at the 2021 Cannes Yachting Festival. 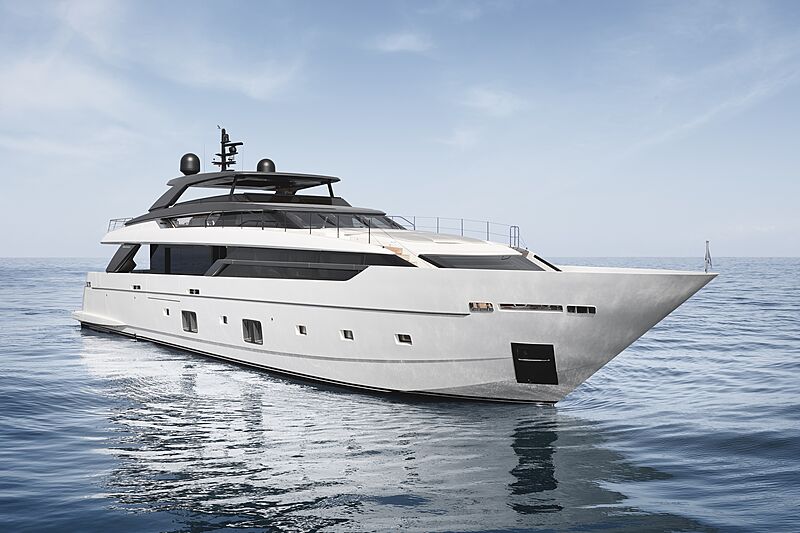 Photo: SanlorenzoBoth models have exterior and interior design by Zuccon International Project, the Rome-based studio that has proved adept at integrating avant garde solutions into Sanlorenzo’s historically graceful design DNA. Throughout the range, the asymmetric arrangements are designed to make the most efficient use of interior volumes and exterior spaces. 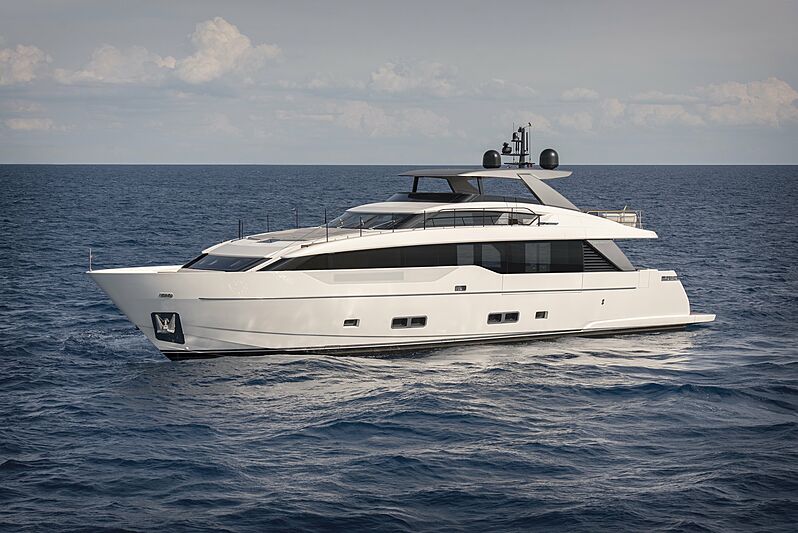 “The asymmetry enriches the design in terms of function, but within an elegant, clean and practical package that retains the deep family feeling that is Sanlorenzo,” says lead designer Bernado Zuccon.  The 27-metre SL 90A is the entry-level model in the asymmetric range and like its larger sisters is full beam on the portside with a side deck to starboard. On the fly deck the asymmetry is reversed with a portside walkway leading down to the forward sundeck and the forepeak. 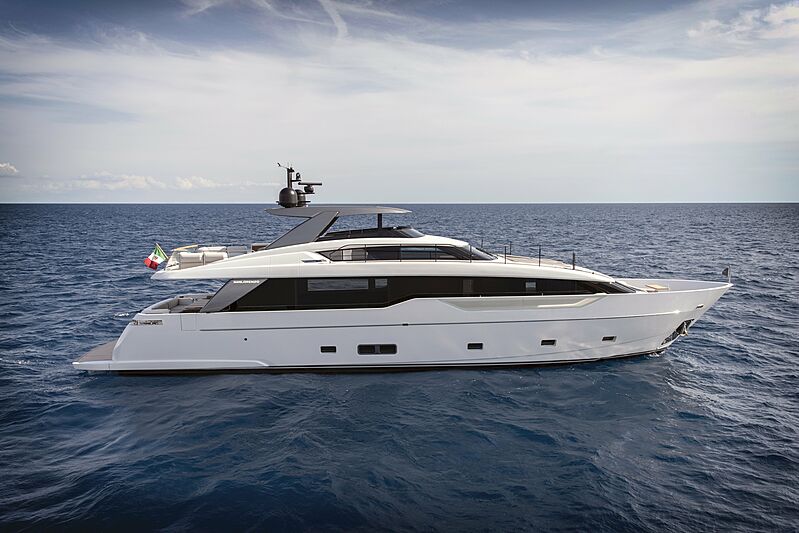 Inside the main salon a classic feature of the Asymmetric line is the transparent glass staircase to the fly deck and an electric up-down bulwark slides down to provide uninterrupted sea views. A striking architectural feature is the airy stairwell that is open all the way to the raised pilothouse and presented structural challenges when the new model was in the design and engineering phase. 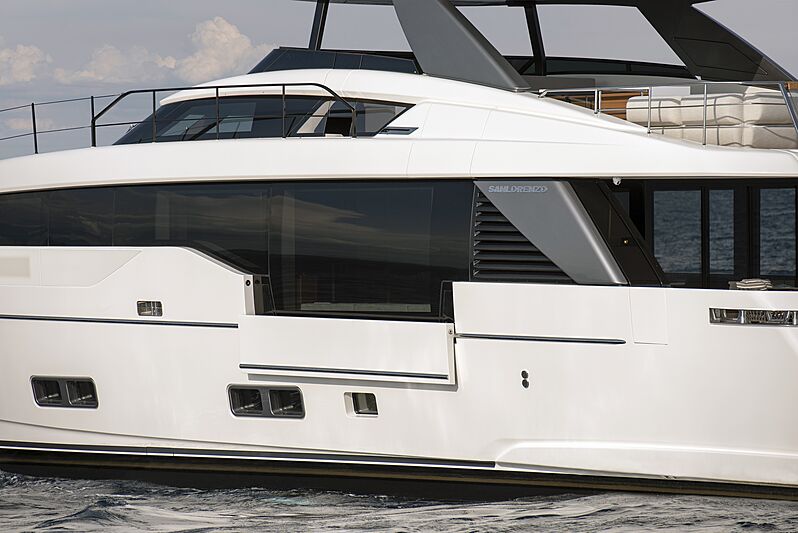 The asymmetrical layout means that the SL90/A has a master stateroom on the main deck forward, a solution normally found on larger yachts, with steps down to the wardrobe and  then bathroom in the bow. It also has direct access to the forward lounge seating that becomes a private owner’s area.

The interior design by Martina Zuccon is based on neutral tones with bronzed steel accents. Crisply contemporary yet discreetly sophisticated, it is punctuated with bright artworks and flashes of colour. Free standing furniture is by Italian designer brands such as Dordoni and Paola Lenti. All the furniture on the fly deck is free standing and was custom made according to the owner’s requests. The guest accommodation on the lower deck comprises two ensuite double cabins and a VIP suite.  The SL 90A has Sanlorenzo’s ‘One Way’ glazing (to my mind an acquired taste), which from the outside matches the white hull colour to provide a sense of aesthetic continuity. 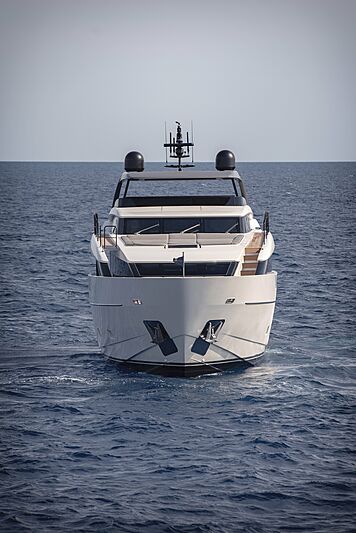 The boat on display was fitted with twin MTU engines of 1,940 horsepower each for a top speed of 29 knots, but future production will have twin 2,000hp MAN engines with no change in performance but the more compact MAN units result in more space in the engine room.

“The SL90/A is a fascinating project but was complex to realise as the smallest in the Asymmetric fleet, “says Bernardo Zuccon. “Despite the compact volumes we were able to create a loft-like feeling on board with plenty of light, a sense of space and great livability.” 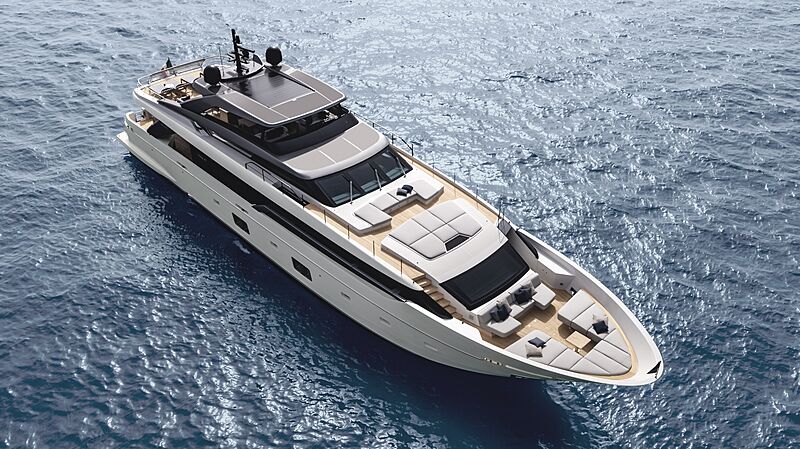 Photo: SanlorenzoSanlorenzo has taken the asymmetric concept a step further on the flagship SL120/A, which has a ‘half-widebody’ layout on main deck with a starboard passageway between the aft cockpit and the main staircase amidships. It then becomes widebody to allow for a full-beam owner’s suite forward. An exterior stairway, also on starboard, leads over the fly bridge to the foredeck living area that also can be directly accessed from the owner’s stateroom.

“With the SL120/A we’ve reinforced our desire to use asymmetry in a very clear and understandable way,” says Bernado Zuccon. “We were helped by having more space to play with, but we also wanted to create a deeper sensory experience between man and the sea.” 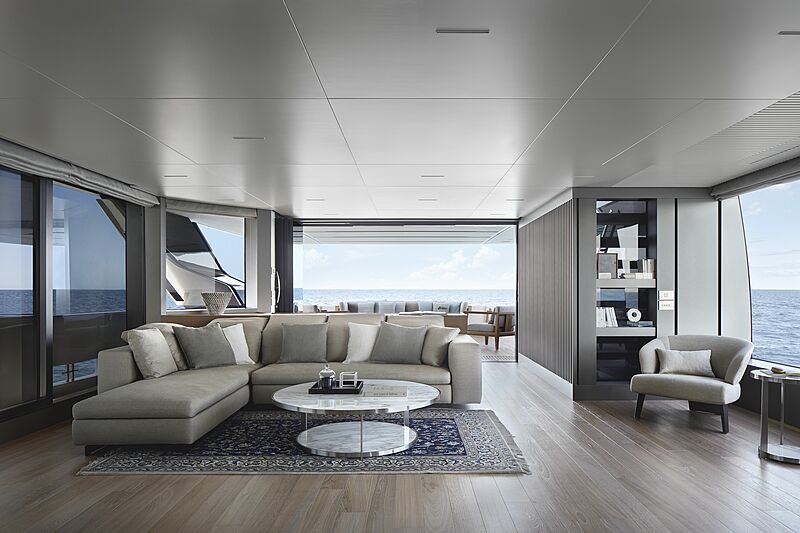 Photo: SanlorenzoA sliding glass door into the main salon folds away against the entrance to completely open up the space between interior and exterior. There is another sliding door and a drop-down balcony to starboard. A specific request of the owner of the first SL 120A, Stella, is an all-glass elevator linking the lower and main decks. 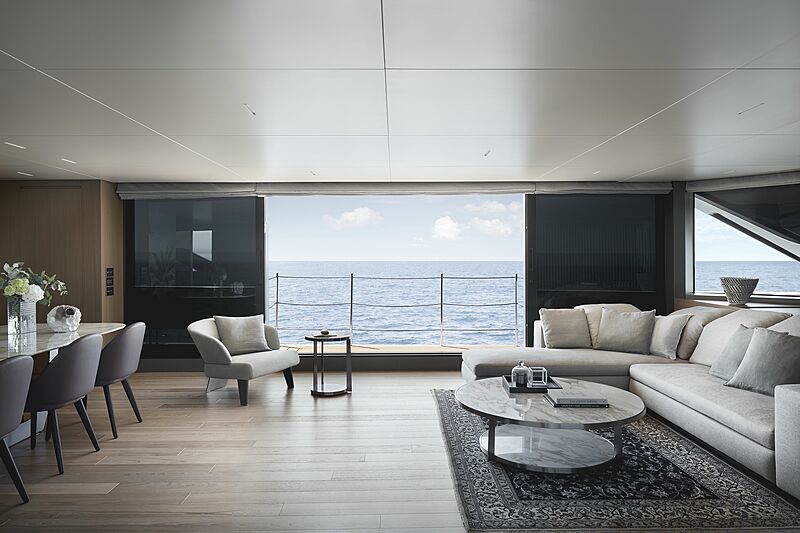 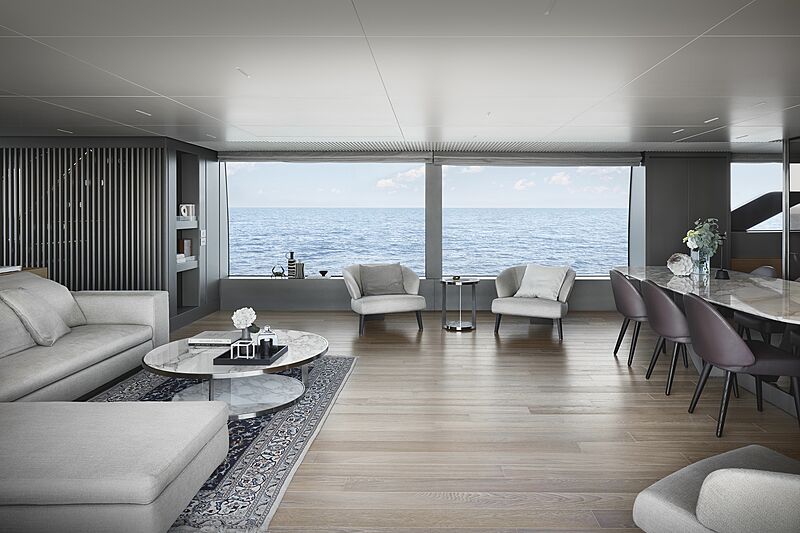 Photo: SanlorenzoTogether with the owner, Martina Zuccon chose Thai walnut for both wall panelling and flooring combined with a metallic lacquered finish for the ceilings for a relaxed and refined ambience. A mosaic of bright green tropical foliage decorates the dining room bulkhead that slides open to reveal a TV and the predominantly free-standing furniture is by designer brands such as Minotti, Baxter and Roda. 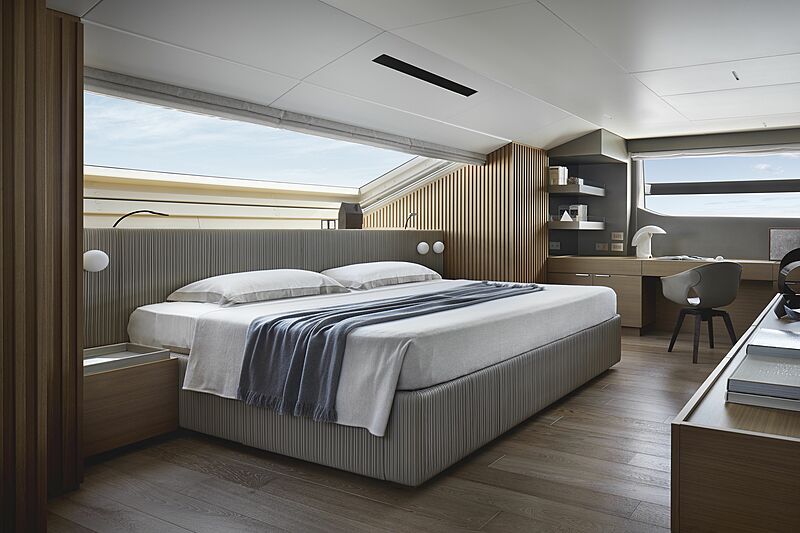 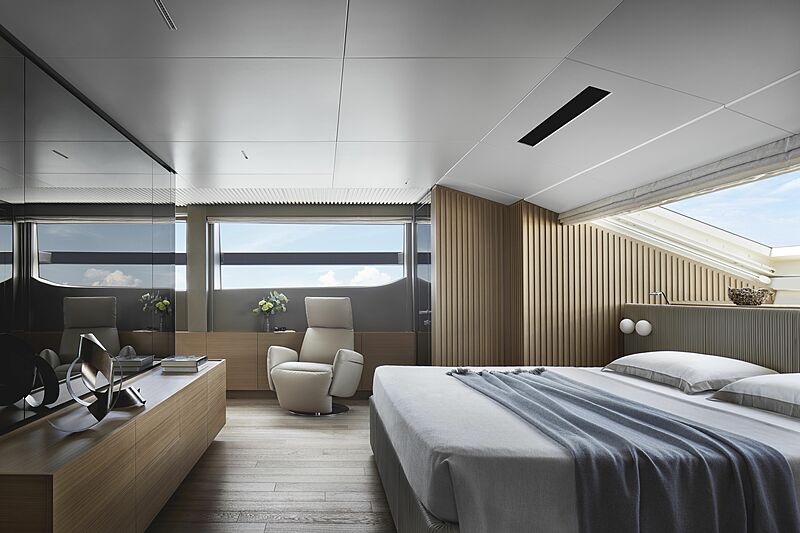 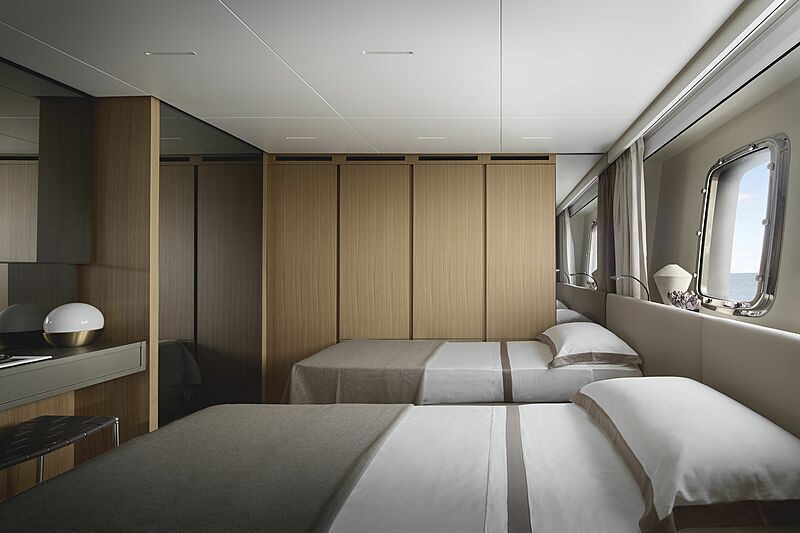 There are four ensuite double cabins on the lower deck for a total of 10 guests including the owners.  When the tender and toys are in the water, the garage in the stern doubles as a sea-level beach club with a swim platform aft and two folding side decks. 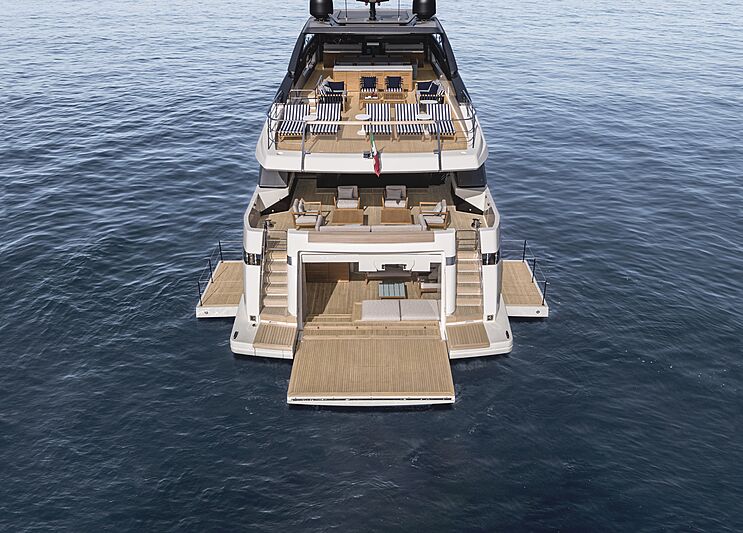 Photo: SanlorenzoThe first unit is powered by twin MTU engines of 2,600 horsepower each for a top speed of 27 knots (twin 2,400 horsepower CATs are also an option). At an economical 10 knots the yacht has a range in excess of 1,800 nautical miles. 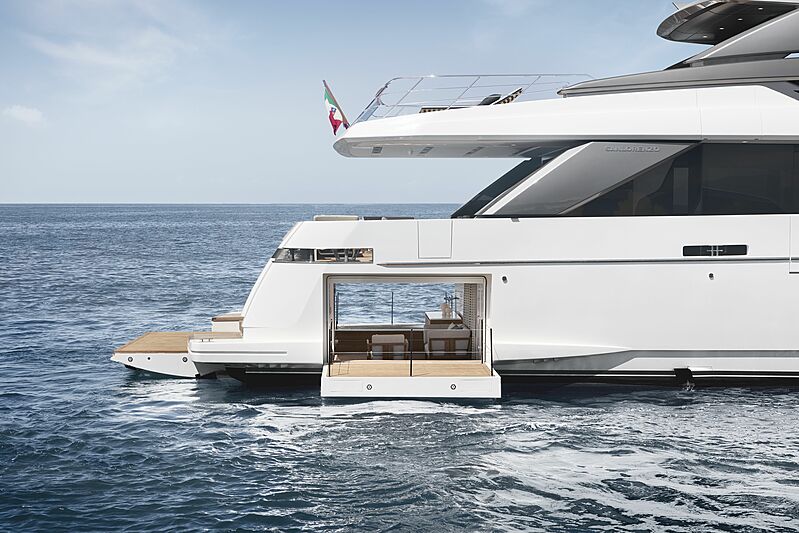 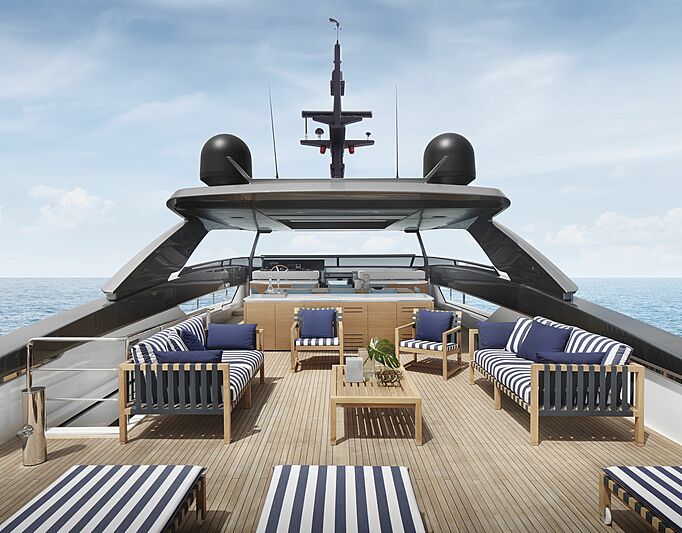 Photo: SanlorenzoSymmetry seeps into every facet of design and architecture because it invokes a sense of harmony and balance, which is why asymmetric arrangements on all but the largest yachts are rare. The clever part of what Sanlorenzo did with the SL102 three years ago was introduce an asymmetry that is almost invisible and feels so natural that you forget it’s even there.

Sanlorenzo unveils the SL90A, the latest model in its Asymmetric series