Who better to know how an owner can draw the best use of space from their yacht, than a captain? Paul Brackley, captain/designer/project manager, used his experience at the helm to create a yacht which moulds to the guest experience with seamless, beautiful functionality. Lady Candy’s mastermind talks us through the process. 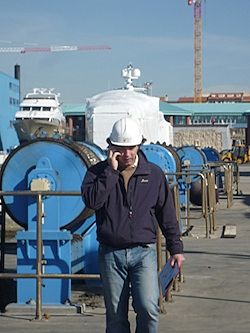 With 20 years in the industry as an engineer and captain, Paul Brackley has had plenty of time to observe how guests really use yachts. Not the way designers think they use the yacht, or the way in which builders would like them to use the yacht, but how they really get down to the business of relaxing onboard.

Having put that knowledge to good use through his company, Central Yacht, in build supervision and operation of 65- metre Ambrosia and charter award-winning 60m Xanadu, Brackley was ready to sketch their successor. A well-timed tip-off that a potential client was discussing plans for a 55-metre yacht led to a speculative trip to Hong Kong, where this designer-captain secured a meeting with the client; and quickly afterwards, his trust. That owner partnership was to pay dividends, with the end result 56-metre, Benetti-built, Lady Candy.

The experienced owner knew just what he wanted and had the plans to show it. Passionate about the water and a keen diver, he needed easy access to the sea as well as placing great emphasison privacy.

The problem? The plans didn‘t quite work on a practical level. “Having succeeded in getting an interview with the future owner, I was shown the plans for a rather misguided motoryacht. Consider that the laundry was accessed only through the dining room and you can understand how bad it was,” says Brackley. 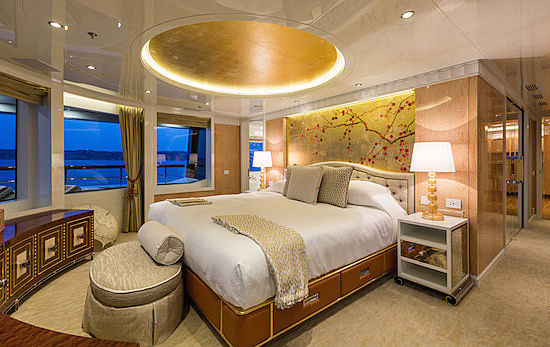 All wasn’t lost however, with the planned feature of two master cabins on the upper deck retained, and added to with Brackley’s ideas of a panoramic salon, central massage room with signature picture window and, importantly, the placement of the tender garage forward on the main deck.Those two, very private, master cabins, created to house the owner and his daughter, after whom the yacht is named, also make Lady Candy an enviable prospect for charter marketing having annulled the possibility of two principals arguing over a master suite. 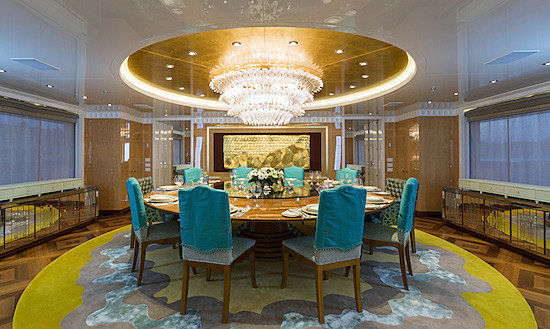 Brackley then ﬁne-tuned the concept with that design insight of his, honed through years of careful observation of the practical ﬂow of movement around, and use of, a yacht. First came the functionality; then the looks. The 56-metre feels like a much larger yacht, with an 88m2 main salon and ﬁve decks demonstrating an easy, natural ﬂow of movement radiating from a central lobby. 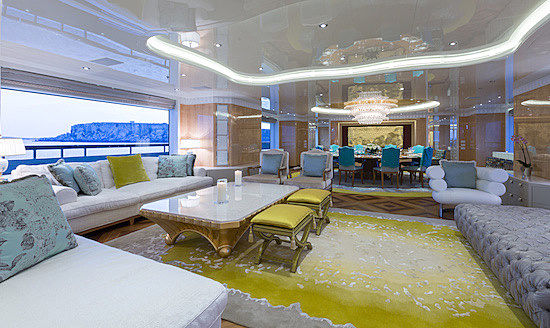 “Understanding the real operation, use and function of an object, especially one as complex as a yacht, is imperative to create a practical design. Making the design beautiful is the ultimate and more subjective goal. However, ﬁrst the design has to work or the client’s appreciation and enjoyment will be short lived.”

Much of that appreciation and enjoyment is as intangible as guests getting the right feeling as they step aboard, and Brackley is proud to say that many guests have described Lady Candy as feeling welcoming and delivering a strong sense of home.

“The ﬁrst impression of the yacht conveys something hard to deﬁne, it is just a feeling; you know something is different but you don’t know what it is. I think this is down to the meticulous attention to detail that comes from having the designer on the yacht almost everyday of the construction.” 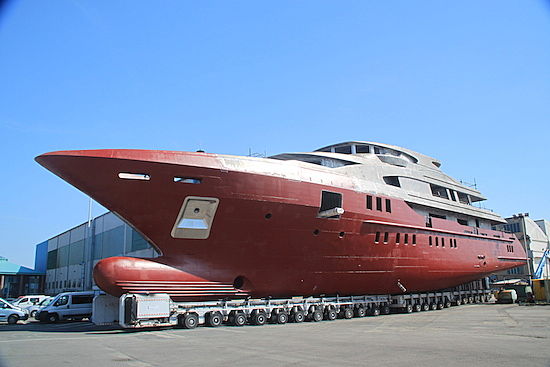 As an underwater enthusiast and diver, a beach club was a must for the owner, and Brackley delivered and then some, adding a bar, gymnasium, steam shower, bathroom and living area next to the swim platform, with separate entraces for guests and crew.

Both internal and external stairways provide access to the swim platform and that operational knowledge of Brackley’s once again comes to the fore.

“The ﬁxed swim platform is far more welcoming to guests, whom I have never found to be comfortable with the ﬂoating type, opening door platform commonly found on a yacht this size.” 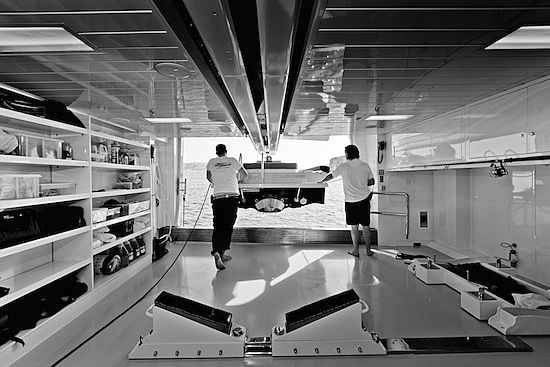 Though exterior modiﬁcations stayed within the envelope of the Benetti standard platform, Lady Candy’s layout is radically different with that tender garage forward on the main deck freeing up the stern for the impressive beach club, and interior spaces.

“I opted for an athwartship launch to keep the door opening as narrow as possible. Some other yachts stow the tender in the same area but launch the tender lengthways. This eats into the main deck ﬂoor space and requires a very large and heavy door and reinforcing. I also prefer single point lifting for tenders as this makes it a much quicker and safer job to hook up the tender, as well as requiring only one crewmember,” says Brackley. 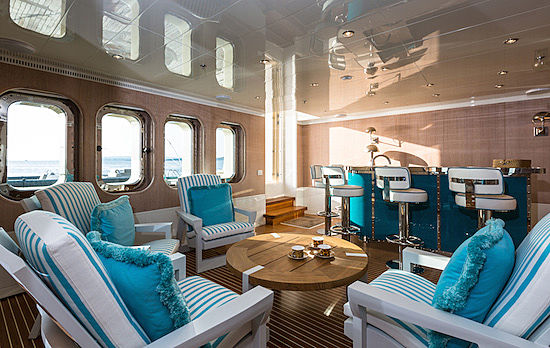 This same positioning results in Lady Candy’s beach club and astonishingly light, bright massage room and owner ofﬁce, separated by a glass partition; the perfect spot to watch the wake from the stern portholes while underway.

“Having operated a number of Benetti yachts I was quite adamant that the stern tender garage had to go. On Xanadu, I had to conﬁne guests on board several times because it was too rough to launch the tender from the stern garage and even on Ambrosia, the stern side garages were often too dangerous to launch or retrieve the boats. ”

That intelligent use of space continues up through the yacht, crowned with a more-protected sundeck than is usual, behind the bridge. This holds signiﬁcant advantage over a traditional open sundeck, points out Brackley, when asked if it was the result of a compromise. “The central arch of more conventional sun decks becomes a wind tunnel accelerating whatever breeze there is to uncomfortable levels. Placing the dining table in the wind tunnel (for sun and rain protection) creates a very unpleasant dining area where napkins and occasionally glasses ﬂy away. On Lady Candy the wheelhouse protects the sundeck from the wind creating a perfect alfresco dining and cooking area.” 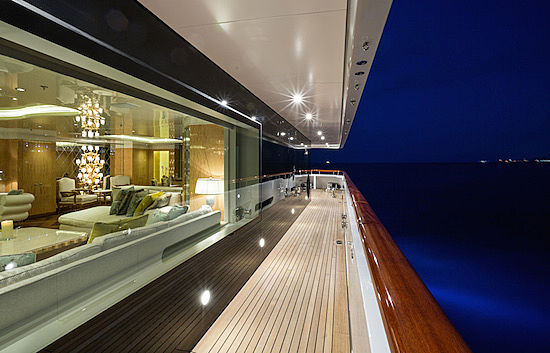 And not at the expense of sunworshipping. Lady Candy carries more sunbeds than a 60-metre Benetti when the VIP and owner’s terraces on the upper deck are taken into account. Incredibly, there were zero change orders during the build. Brackley attributes this to more than a year spent in planning stages and four years of full immersion in designing, building and launching the yacht - and that launch happened two weeks before its contractual date.

At that point Brackley then replaced his captain’s hat and set about the putting his creation through her paces.

“I made a 3,500 mile shakedown cruise around the Mediterranean and then a delivery trip to the Maldives where I handed over to the new captain. With over 8000 miles in navigation and operating experience I can say I am very happy and would not change anything.”

This is a user-friendly yacht; a liveable space which invites guests in and makes them feel at home. Four guests cabins are found on the lower deck, with 5 cabins for the 10-person crew plus captain’s cabin and a further cabin on upper deck for 2 staff. Above, the spacious main deck draws guests with that enormous main salon, a bar, plush sofas, dining room, galley and cinema, and above that, the owner and VIP suite are located in total privacy. With the VIP suite to the bow and owner’s astern, each has panoramic water views with private terrace. A secret crew access to the foredeck through the tender garage is located below the VIP terrace. 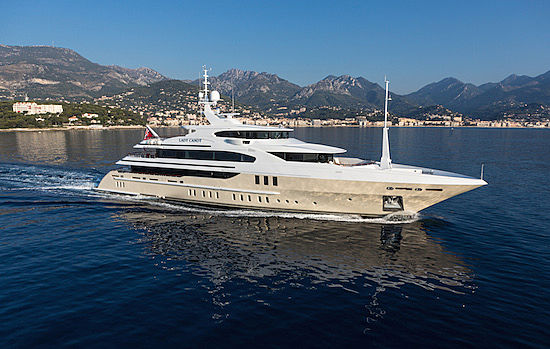 Though his time is divided between being a captain, project manager, and a designer, Brackley ﬁnds the three functions complementary and believes the end result tells its own story. And he doesn’t necessarily have to put down one role, while he carries out another.

“As captain I can check my designs and ideas in operation and witness guest interaction and feedback. As project manager, I am not just following the build but ﬁne-tuning and modifying design along the way. Creative design is something I really enjoy and with modern technology it is so easy to give form to ideas. I can take an idea for a 50m yacht to a fully modelled and animated rendering in a couple of days or a week working evenings so I can actually be a designer while operating a yacht or building one.”

So what’s next for the captain in the designer’s seat? Brackley has no shortage of ideas for more.

“I would like to work more closely with a shipyard in developing a completely custom project.” In the design cupboard we have a very innovative 70-metre contemporary yacht with clever use of space and exceptional entertaining capability, and a retro styled 55-metre Classic yacht also with a host of original features.”

We predict this multi-talented professional with a penchant for doing it all won’t be putting down the pen, or stepping away from the helm, any time soon.