With the Maritime Innovation Award and a nomination for the DAME Award in the bag, METS could not have got off to a better start for DMS Holland. This promising start was paired with a fitting sequel having received a Special Mention for the AntiRoll stabilization system during the presentation of the Dame Award.

Co-owner and commercial director of DMS Holland, Patrick Noor: “Naturally, we had hoped to win the Dame Award 2014, especially having already recently been awarded the Maritime Innovation Award. However, this Special Mention also carries distinctive value and, together with winning the Maritime Innovation Award, certainly contributed to the large numbers of visitors at our stand. We can look back on a very successful METS.” 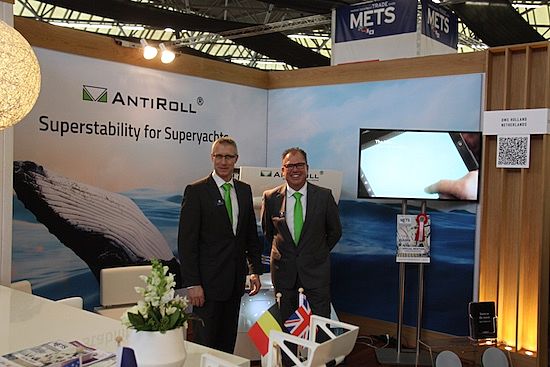 Arnold van Aken, engineering director of DMS Holland: "What really struck me about the visitors to our stand was the purpose with which they visited the booth. Practically every visitor proved to be well informed about our company and products. The questions they put forward were also technical and very detailed. It just goes to show how our innovative stabilization systems are recognized and acknowledged by the industry."

In practise, Van Aken’s conclusion is indeed supported. Just before the exhibition, DSM Holland received an order for an AntiRoll system for the Feadship Endless Summer, which will set sail in the summer of 2015. During METS, DMS Holland was blessed, quite literally, with ‘a gift from God’ in the form of an order for the 33m motor yacht Kuriakos, whose name means just that. Whilst its name may suggest it was built by Noah, this ‘gift from God’ is in fact being built by Koninklijke De Vries Scheepsbouw (Feadship). As the owners are fully aware that forces from above can certainly ‘shake up those waters’, they have appointed DMS to equip their yacht with one of their stabilization systems.

In addition to these orders for AntiRoll, there were also a dozen orders for the RotorSwing stabilization system which can be added to the list.

Patrick Noor: "These results are of course better than expected. We are fortunate enough to find ourselves in such a ‘blessed’ situation, so to speak. It is clear: the market is open to innovation. It started, incidentally, with the shipyard Wim van der Valk. They were absolutely the ‘innovator’ and catalyst for AntiRoll. Van der Valk is committed to technology and innovation and had confidence in AntiRoll from the very beginning. The first AntiRoll system is currently being installed by them in a 37 meter trawler that will be launched next spring. And meanwhile, the number ‘early adopters’ is increasing. In fact, we are currently in talks with most of the national and international naval architects and superyacht yards and a number of them are strongly considering moving away from the conventional roll damping systems and over to DMS Holland’s AntiRoll in the very near future."

A major driving force behind this development are the test results. After extensive testing and research in the test tank at MARIN, the AntiRoll system has now also been tested in practise by Bosch Rexroth. The tests show that when sailing, the curved AntiRoll high aspect ratio fins, in comparison to conventional systems, achieve 50 to 75% less resistance. This reduction in resistance not only has a positive effect on the speed but also on the fuel consumption.

Arnold van Aken: "Even though computer modelling speaks clearly for itself, it is still crucial to run a model validation of the theoretical calculations. That is why we commissioned Marin to subject the AntiRoll system to a comprehensive series of tests. The research was focused in particular, on determining the force and resistance provided by the fin for both cruising and zero speed. All of the practical tests that we have conducted to date at MARIN and Bosch Rexroth, have matched and in some cases even exceeded the theoretical modelling." 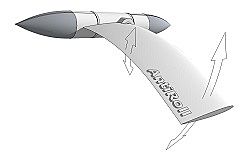 AntiRoll is a roll damping system specifically designed for superyachts. Thanks to its unique, dual- axis fin stabilizer, which rotates whilst sailing and flaps at anchor, AntiRoll provides stabilization both underway and at zero speed without any compromise of performance in either circumstance The curved, high-aspect ratio fin significantly reduces the drag by between 50 and 75 percent whilst sailing which in turn has a positive impact on the fuel consumption. In addition, with the fin flapping at zero speed as opposed to rotating, a greater lifting force is generated providing a more stable platform.

Of particular interest for sail yachts, the fin is also retractable and can be partly folded back in to the hull. This leaves only minor resistance whilst sailing - a feature welcomed by sailing enthusiasts and which solves well known problems related to non-retractable fins. AntiRoll uses an innovative hybrid drive system resulting in relatively low power requirements.

AntiRoll is an innovative piece of craftsmanship in maritime stabilization engineering for super- and megayachts, which, as the Maritime Innovation award represents, has now been recognized and acknowledged as being so by experts.

The second product, to be showcased at this debut appearance, is RotorSwing. This electric roll damping system for yachts up to 30 meters and the first of its kind in the industry, provides a unique solution based on the Magnus Effect: rapidly rotating cylinders which, subject to the direction of rotation, generate an up or downward pressure. 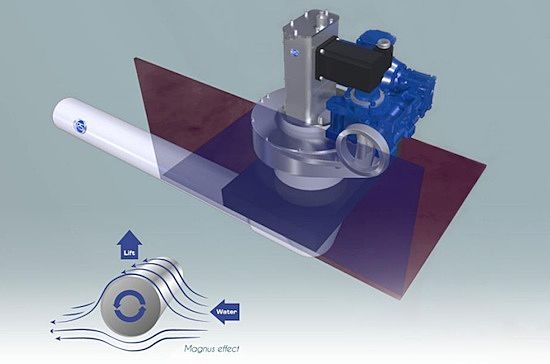 The biggest advantage of RotorSwing in comparison to a fin driven conventional system, is the greater roll damping at lower speeds. The rotors do not have any effect on the steering and therefore, unlike fin based systems, can be mounted at a position of choice. It is even possible to mount the rotor at the stern which, in particular for fast-moving yachts, may be preferable. RotorSwing features retractable rotors, eliminating the risk of damage and ensuring less resistance than fins.

The system is powered by a compact electric motor which requires little space for onboard installation. This, in combination with the rotors which can be mounted at a position of choice, means that it is not necessary or a problem if the installation of stabilizers is not taken in to consideration during the initial design and build stages. These product features, the fact that the system is available from stock and can be completely installed within 3 days, make RotorSwing ideal for retrofit installation and ensure that owners need never miss a weekend or part of their holiday again, even in the middle of the sailing season.