The last day of March was an historic day for two companies – one well-established, one new – with the launch of 45m Big Fish at McMullen & Wing, and the signing of a second yacht, 50m Star Fish with Aquos Yachts. 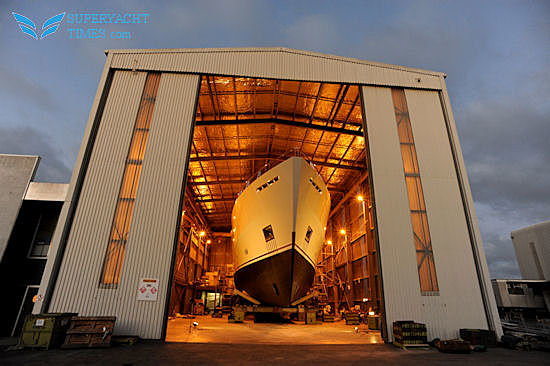 The launch followed an exciting and dramatic two-day move for McMullen & Wing’s largest vessel to date from the yard’s voluminous construction shed into the waters of the Tamaki River. The move went slowly and seamlessly as shipyard workers, families and members of the Aquos Yacht team watched as the massive full-displacement superyacht was pulled from the shed – often with two large tow trucks --with only centimeters to spare on each side of the yacht. 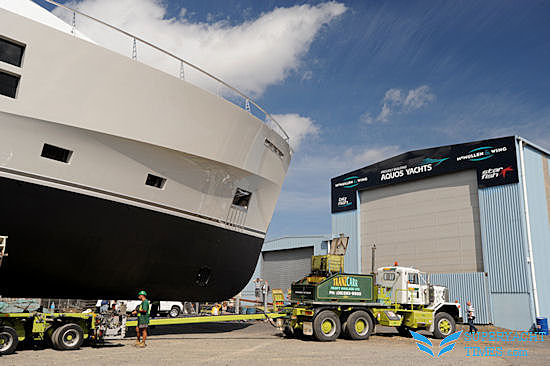 The successful launch of Big Fish, the first vessel from Aquos Yachts, was followed by a signing ceremony for 50m Star Fish, projected to launch in April of 2012. Star Fish will be based on the same hull form, but will include six staterooms and accommodation for 14 crew, and a flexible owner’s deck with optional forward-facing cabin and both fore and aft decks. The stunning arrangement by Greg C. Marshall Naval Architects, which is also responsible for the hull design, allows the skylounge deck to be dedicated solely to owner’s use, or to be incorporated in the yacht’s public space scheme. The captain’s cabin and Starship Enterprise-like wheelhouse will be located on a fourth deck with a dramatic flying bridge and observation pod above it. 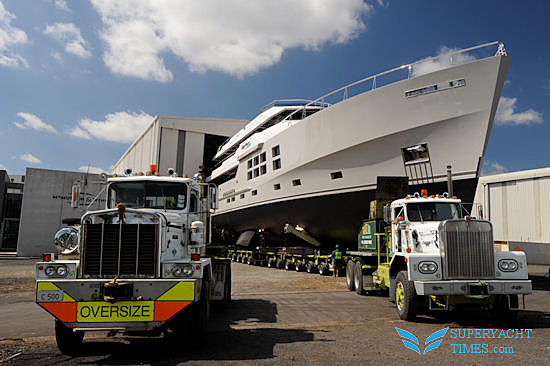 Big Fish will be delivered to her new owner, Richard Beattie of Hong Kong, at the end of May. Following a few weeks of fit-out at McMullen & Wing, Big Fish will be moved to a slip in Auckland’s Viaduct area, where her flybridge overhead, mast and observation pod will be fitted.

Big Fish is the largest yacht launched at the New Zealand based motor yacht builder. The carefully-orchestrated move from the yard’s big shed went flawlessly, aided by McMullen & Wing’s newly refurbished and reinforced slipway which is now capable of hauling and launching vessels like the 50m Star Fish. 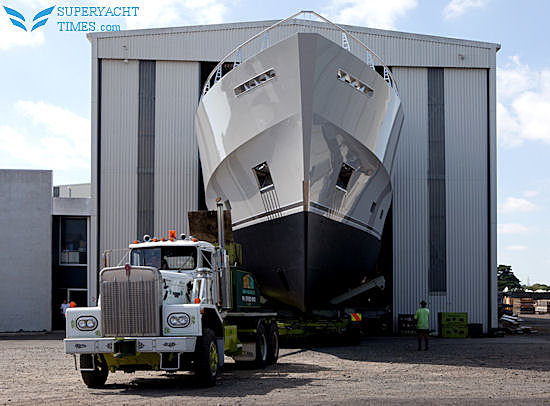 The actual launch was preceded by a short ceremony at which Mr. Beattie exhorted the entire McMullen and Wing workforce, his yacht crew and the Aquos Yachts project team, “Are you ready?” When their reply of “Yeah!” was sufficiently loud he broke a bottle of fine New Zealand champagne over Big Fish’s bow just as she began her maiden voyage into the sea. 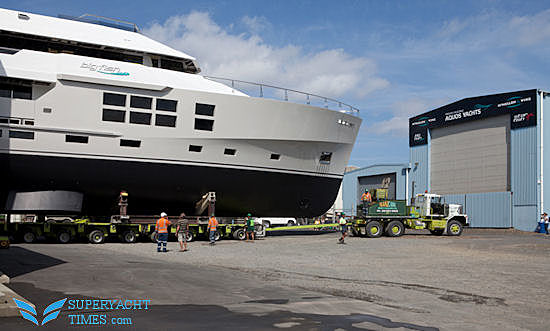 Following break-in sea trials in June, Big Fish will be available for charter July and August in the South Pacific. In October she will visit Fort Lauderdale prior to starting a planned historic circumnavigation, which will take her to Antarctica in January and February of 2011, to the Amazon in March and April, then to the fabled Northeast Passage over the top of Russia in July and August. She anticipates being the first luxury yacht to complete the Northeast Passage, and to be the first vessel in history to complete a Polar Circumnavigation, entering both Arctic and Antarctic Circles, crossing all lines of meridian and passing or rounding all five major capes.