Arcadia Yachts has released details regarding yachts under construction at the shipyard over the course of 2015, including the Arcadia 85 and the brand new Arcadia 100, in addition to the four Arcadia 115 superyachts that have already been produced and sold. Two new models will also be introduced to the industry, the Arcadia 145 and the Arcadia 180. 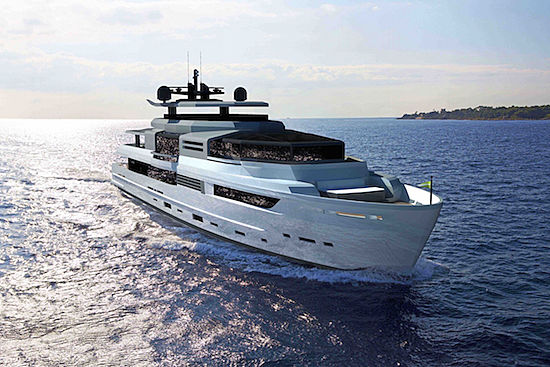 The Arcadia 85 has seen 10 units already delivered around the world, including the Mediterranean, USA and China, and the shipyard have confirmed that hulls #11, 12 and 13 are now currently under construction. A large number of units have been sold in China, and will be delivered over the next five years.

The Arcadia 100 is a brand new model in 2015, built in reinforced fibreglass with vinylester resin for the three external layers. Hull #1 of this 31.06 metres model is also currently under construction at Arcadia’s facilities, and is presently in the lamination stage. Powered by two 1,000 hp engines, she will have a top speed of 18 knots. With fuel efficiency a key component in the design of the vessel, she boasts fuel consumption of approximately 260 litres/hour at 16 knots, which decreases to 160 litres an hour at 14 knots. Electrical energy production can be also supplied by the solar panels that cover almost all of the superstructure.

In addition to the Arcadia 100 new for 2015, Arcadia Yachts will also start construction on another new model, the Arcadia 145. Measuring 44 metres in length, she will have a Gross Tonnage below 500 GT, and will produce 6 kwh from the solar panel verandas located on the upper deck - a 25% upgrade in green energy. Both of the two versions offered by the yard feature the owner's suite on the main deck, with an adjacent office and sitting room, a spacious bathroom and direct access to the lobby. Ample bay windows provide a light and airy ambiance.

The shipyard note that another new superyacht is also on the cards in 2015, with the concept design of Arcadia 180. More details on the 180 will be released later on in the year.