Last Thursday’s star-studded Rock for the Cure event, the Nevada Cancer Institute (NVCI)'s 6th annual fundraising gala at the Mandalay Bay Events Center in Las Vegas, which attracted a bevy of the nation’s most beautiful, powerful and mega-rich, was a resounding success. The Silent Auction alone had many glitterati digging deep into their own personal fortunes - not just for the chance to bid on some of the world's most unique and exciting "bragging-rights-for-life experiences" but the opportunity to help this nonprofit in its efforts to reduce the burden of cancer and provide hope to communities in Nevada, the southwest and beyond (www.nevadacancerinstitute.org).

From having one's own personal Zero-Gravity party for 35 close friends, to exclusive dinners in private manses prepared by the Wolfgang Puck Fine Dining Group, all charity auction items were generously donated, including the much-talked about week-long Tahitian cruise aboard the famed Arctic P expedition yacht. The Arctic P cruise reported fetched $500,000 – the highest bid of the evening. 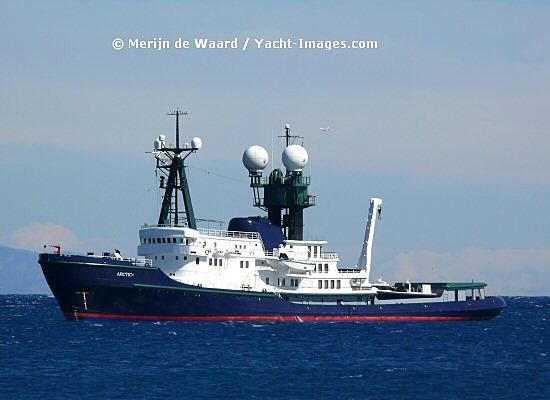 Among the world's largest privately owned yachts, the Arctic P (photo) was originally an icebreaker and has been refitted to provide the ultimate luxury cruising experience. With a separate owner's suite and uber-luxe accommodations for 12, the fully crewed superyacht also features an observation lounge, games room, cinema, screening room, swimming pool, gym, Jacuzzi, and gadgets galore.

According to Burgess, the yachting company that manages many of the world's finest superyachts, "The Arctic P is an exclusive, retro-fitted 288-foot commercial vessel that is now one of the 100 largest private yachts in the world. The larger and more unique a yacht is, the more people want to experience her firsthand," said Jonathan Beckett, Burgess CEO. "We are excited about working with this generous bidder to co-ordinate their dream vacation arrangements and ensure their Tahitian yachting experience aboard the Arctic P exceeds their every expectation."