The Philippines based shipyard HYS Yachts has announced that the 45 metre explorer superyacht Cklass will attend seatrials in just a few weeks time. Amongst the many features on board is a penthouse owner's suite, a crow's nest, a helideck which doubles as an outdoor entertainment platform, a tender deck complete with twin 6.5 metre tenders and a four-deck guest elevator. 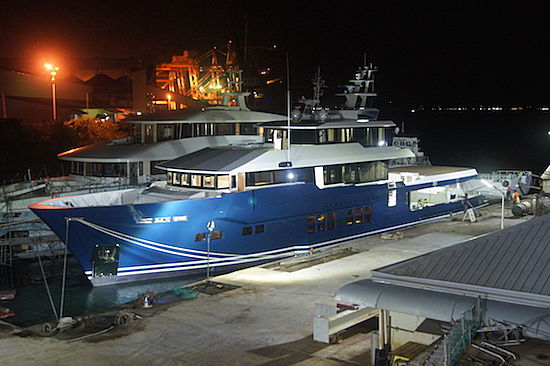 HYS President Mark Prangnell comments on the yacht, saying, “Cklass is as close as you can get to a new build without the price tag. What’s important to note about this project is that this isn’t a mere conversion as the yachting industry commonly understands the term; this project is more accurately described as a ‘Highbred’ yacht. Our Highbred construction model which we initiated with Cklass is much more efficient to build while affording the owner greater leeway in customizing the internal/external arrangement to their satisfaction.”

HYS Naval Architect Simon Jupe explains the Highbred concept further. He says, “A typical yacht conversion essentially involves physically altering existing spaces within a vessel. Using a ‘Highbred’ project workflow, the only items we retain from the original vessel is the meticulously maintained Japanese Government hull and prime mover systems. Everything else - from deckhouse construction to exterior and interior fit-out to hotel services and all supporting equipment - is all brand new and as-per the owner’s requirement.”

Cklass accommodates her guests over five cabins, including an opulent owner’s suite. The owner has decided to sell her immediately upon completion, and will order an 80 metre superyacht from the same shipyard. Cklass will be on the market in early April for an asking price of $13,800,000.