Organisers of “The Mediterranean’s most beautiful yacht race” announced that Atlantic has officially entered the 2013 Camper & Nicholsons Trophée Bailli de Suffren, the three-leg offshore race for classic yachts from Saint-Tropez to Malta, via Sardinia’s Porto Rotondo and Trapani in Sicily. 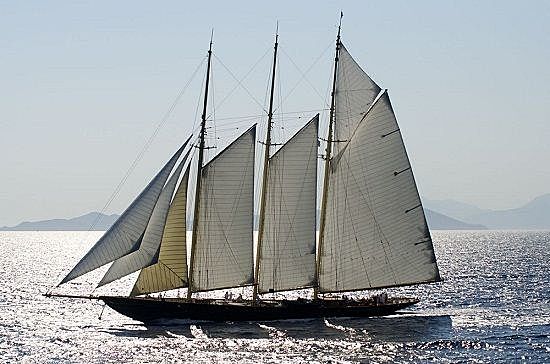 Atlantic is a faithful replica of William Gardner’s classic, winner of the transatlantic ‘Kaiser's Cup’ in 1905 with the famous Captain Charlie Barr at the helm. Covering 3,000 miles from Sandy Hook, USA to the Lizard in Cornwall in 12 days, 4 hours and 1 minute, she set a record that was not bettered by a monohull until 1997.

“The name Atlantic is legendary among classic racing yachts, on the same level as the famous J Class yachts,” said Sean Purdy, C&N Marinas’ Marketing Director. “With 18,500 square feet of sail she will make a magnificent sight on the Bailli de Suffren race course this June.”

Atlantic’s captain, Ed Kastelein added, “Atlantic sailed this race in 2010 and our charterers loved it then. I expect this time will be even better.” Throwing down the gauntlet to other big boats in the classic fleet, he continued, “I look forward to taking on a few other big racing yachts. If they’re up to it!”11 April 2013

The original Atlantic’s sailing career ended with World War II, and she was eventually broken up in 1982, but in 2009 the modern replica was launched. At 62m (203 feet) overall, including bowsprit and mizzen boom, and with a permanent crew of 11 and accommodation for 12 guests she is without doubt one of the most impressive sailing yachts afloat.