A well-attended awards ceremony proved a good way of wishing the latest cohort of UKSA superyacht cadets well as they leave the maritime training base to start work in the industry, as part of their three-year cadetship course. 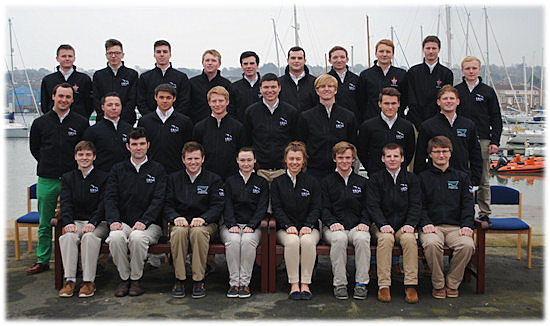 The 30 students completed the first five months of the programme, gaining their yachtmaster qualification among other qualifications, and have now started paid work, building up sea time as an essential part of their studies.

The cadetship ceremony was attended by proud parents, UKSA staff and maritime industry professionals. Also in attendance were representatives of Seafarers UK and Trinity House, the organisations that have sponsored 20 cadets through bursaries, funding 75% of their entire three-year course.

Speaking before the ceremony, Dennis Treleaven, director of grants and external operations at Seafarers UK, said of the UKSA cadetship: “We like the fact it provides a route into a career for young people who might not otherwise get their first foot on the ladder. It’s a structured career course, with both study and hands-on sea experience, and that’s a great combination.”

One of the new cadets in 2012 was Ross Green, himself on a bursary through Seafarers UK. He ended up being the most impressive student, earning himself the Top Cadet award at the ceremony.

He said: “For me, this was the doorway I was looking for, a way to get into the industry. I have been working with some incredible instructors, immersed in some really structured learning. The successes you get at every step drive you on, and it inspires you to go out into the industry and forge a career. Most of us want to be deck officers and then captains at some stage in our lives.”

Ross’s proud father Kevin Green, of Norwich, said: “Getting the bursary from Seafarers UK gave Ross the leg up, as while he has always been motivated this was just what he needed to get started. This is an industry that most people have never heard of and what they do at UKSA is amazing. They present the students with so much, to fully equip them for a career at sea. It’s incredible what they achieve, in such a short space of time.”

During the ceremony, Commodore David Squire, speaking on behalf of Trinity House, spoke of the initial idea which came about in 2008, of sponsoring young people to enter the growing superyacht industry. The PYBS (Professional Yachtsman Bursary Scheme) was formed and has continued since then to provide funding to those who want to launch a career at sea but cannot afford the course fees.

Emma Baggett, UKSA’s Industry and Cadetship Manager, added: “This isn’t just a training school. We spend a lot of time mentoring. In the first five month phase the cadets do the equivalent of one year of a university degree course so it is a lot of pressure they are put under.

“We have a dedicated Industry Guidance team, and our contacts have resulted in 12 of the 30 cadets securing jobs by the end of Phase 1. Most notably, crew agents YPI and Wilsonhalligan have been instrumental in enabling us to achieve these placements.”

Simon Davies, UKSA’s director of youth development, told the cadets: “This next step is probably going to be one of the most exciting times of your lives. You have had a fantastic time training but now you are going out into the industry. Your time at UKSA is something you should remember, take with you, and use going forward.

“UKSA is about providing this experience and giving these opportunities to young people. Giving you the knowledge, the experience, the qualifications, the skills. We offer the added value, the support network, the mentoring, the life skills, and not just a piece of paper to say you’ve completed the course.”

Funding is available for the 2013 cadetship intake in October, providing a unique pathway into the superyacht industry. For further information and guidance, call +44 (0)1983 203001.