Azzura Marine proves its commitment to quality, innovation and superior service following the successful launch of two superyacht projects at its shipyard in Newcastle, Australia. Boasting a sparkling paint job and new name, Azzura Marine released the much anticipated 45m MY Ilonka into the water after ten months in the group's purpose built refit shed. 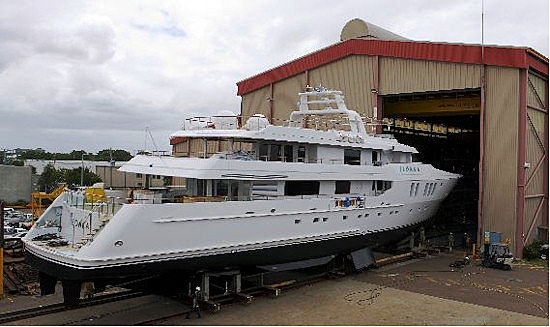 Over 100 specialist technicians were involved in the major refit of MY Ilonka. Her main engines were rebuilt, substantial structural modifications were made to her exterior and a new air conditioning plant and interior ventilation system was installed, amongst other items.

With its impressive site features and vast technical experience, Azzura Marine has established a solid reputation as the superyacht refit and repair centre of choice for yachts visiting the Australasian and South Pacific regions.

After recently spending six weeks at the Newcastle facility SY Squall Captain Richard Le Quesne stated he has "no hesitation in recommending the yard" to other superyacht captains and crew. He praised Azzura Marine for their efficient service and highlighted the "excellent" quality of services available at the facility.

“The Azzura Marine team have been enormously helpful and the shipyard facilities here are second to none,” commented Squall's First Officer Tom Hood.

Azzura Marine enlists the services of world class contractors including paint, electrical and electronic professionals. In addition to providing a complete refit and repair service, Azzura Marine builds custom motor and sail yachts up to 74m under the internationally acclaimed Azzura Yachts brand.