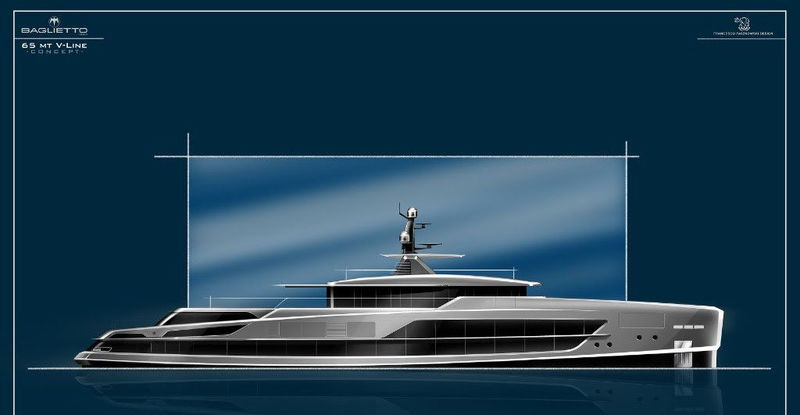 Photo: Baglietto S.p.A. 62m
The first project the yard announced is a superyacht from the drawing boards of designer Francesco Paszkowski. The 62-metre superyacht project contains elements of a classic yacht profile, with a modernist twist. Guests will be welcomed onboard through a float-in 10-metre tender garage, stepping onto the yacht in style and comfort. The same garage can be converted to a large beach club when at anchor thanks to the addition of two hydraulic hatch doors.

Baglietto says that the inspiration behind the concept is the "bond between light and water". As the interiors onboard can be customised to the tastes of new owners, the exact interior design remains unclear. However, the superyacht will feature ceiling-height windows on the main and upper decks, allowing plenty of natural light to filter in. An aquarium on the main deck will be flooded with daylight from the glass-bottomed swimming pool located above.

Onboard accommodations are set to include six cabins. The VIP and master cabins will be located on the main deck and four additional guest cabins on the lower deck.

Additionally, a touch-and-go helipad and water toy storage locker can be found on the forward section of the 62m concept. Baglietto adds that “several propulsion solutions are currently being developed for this yacht, including a hybrid one.” 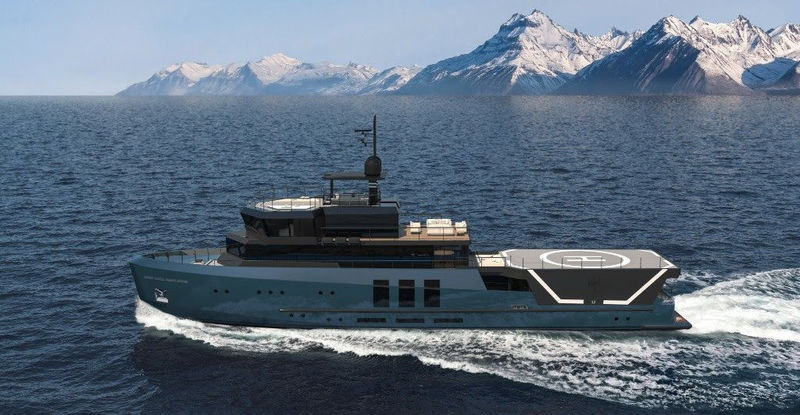 Glazed surfaces facilitate air interiors filled with natural lighting, while metal finishing simultaneously grounds the light interiors and lends a sense of sturdiness. Set to include selected art from around the world, the 43m project will feature large showcase-style shelving, Indian silk fabrics and Italian marbles throughout.

The upper deck onboard is reserved exclusively for the usage of the owner. Dynamic privacy options have been designed so that other guests have the option to utilise the upper deck - depending on the needs of those cruising. The owner’s cabin faces forward and is easily accessed from the onboard helipad. The helipad, when fully extended, measures 151 square metres, and can be used as a large sundeck when at anchor.

The main deck is set to include a full-beam saloon with ceiling high windows and bulwarks. A winter garden sits between the saloon and the outdoor area - which can be used as a TV room when cruising through less-than-perfect weather conditions.

Crew spaces have been designed so that guests and crew have separate access and are set to cover two decks. With long-term cruising in mind, the 43-metre concept is ideal for owners looking to embark on journeys of adventure and discovery while enjoying the comfort of their superyacht.