Only one month after the order for a 54m superyacht, Baglietto has announced the sale of a 46-metre steel and aluminium displacement superyacht. Designed by Francesco Paszkowski, the Eastern European owner of Project 10217 was represented by George Panagakos of Megisti Blue Yachts.

The construction of the superyacht is already at an advanced stage at the La Spezia shipyard and she is due for delivery in early 2015.

Project 10217 features a large (approximately 25 sq. m) beach club. The main deck includes a living area, a dining area and the master stateroom. On the lower deck there are four guest cabins, two of which are double and two are twin. 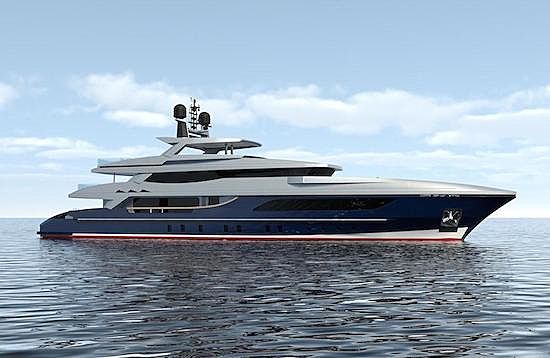 Two 3512B Caterpillar engines push the superyacht to a maximum speed of approximately 17 knots and a cruising speed of 12 knots, with a range of 4,500 miles. This yacht falls within the 500 GT category and will be classified in the top class of the American Bureau of Shipping in compliance with MCA Standards.

Besides the 54m and 46m superyachts, Baglietto is also building 46m and 61m motor yachts. Projects of 43 and 46m are at the planning stage, while a 38m yacht is currently on the drawing board.