Balk Shipyard in the Netherlands has completed the radical refit of the 70-metre research vessel Golden Lion into a superlative three-masted topsail schooner. The work was carried out to EU Directive 98/18 on safety rules and standards for passenger ships. 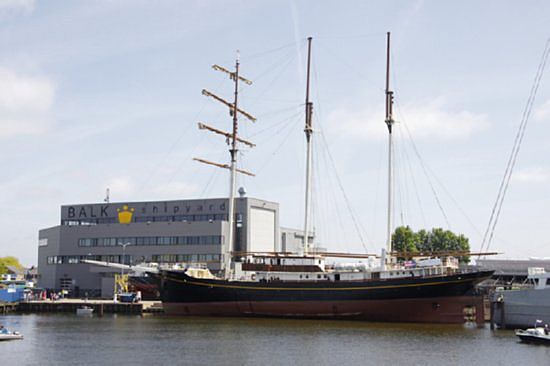 The better-than-new vessel was launched by the yard on the ‘Day of Urk’, an event held every Whit Saturday to celebrate the unique heritage of this former fishing village. The owners of Golden Lion allowed the local people, many dressed in traditional costumes, to come onboard the yacht and see the remarkable conversion achieved by Balk.

Originally built in 1937, Golden Lion (Gulden Leeuw in Dutch) gained her fame as the sister vessel of a classic boat used by the Danish royal family. The current owners are experienced sailors, having previously run two renowned three-mast schooners, Swaensborgh and Hendrika Bartelds. After finding Golden Lion in Denmark in 2007 they brought her to Balk Shipyard for a comprehensive refit. The yard was responsible for all the metalwork and the vast majority of the technical activities.

Brought up to the very latest standards in every aspect of her aesthetics, equipment and technologies, Golden Lion will serve a dual function as a sail training vessel and a day sailer for up to 200 guests. All the original detailing that makes the boat so special has been carefully removed and returned onboard by the Balk craftsmen, who have once again showed their ability to combine the past, present and future to unique effect.