Baltic Yachts has signed a contract with a well-known ocean-sailing yachtsman to build its largest yacht to date. To assure a “modern classic” shape and maximum performance the ketch has been codesigned by two top naval architecture offices: Gerard Dijkstra & Partners in Amsterdam, The Netherlands, and Reichel Pugh in San Diego, California. Additional hydrodynamic analysis has been performed by Frank DeBord, of Annapolis, Maryland. The structural engineering will be carried out by SP/Gurit. Project management is by Jens Cornelsen, of Glückstadt, Germany. The interior, by Dick Young of Lymington, UK, will have a classic mahogany style with lots of white-painted surfaces. 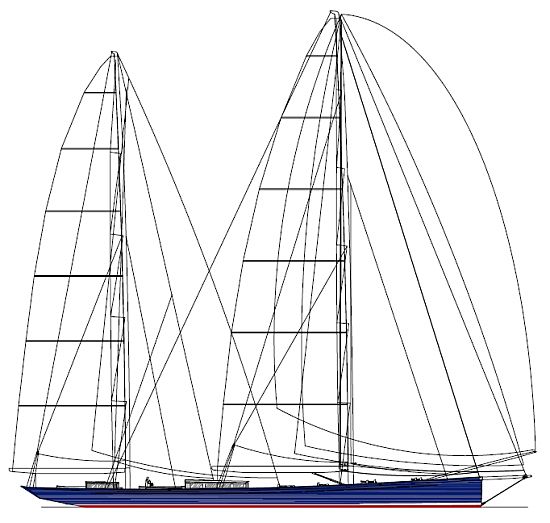 Baltic Yachts, which had commissioned the 147 feet Reichel/Pugh designed Visione with only 105 t displacement in 2003, has set delivery of this high-tech carbon composite yacht for July 2010.

This stunning plumb-bowed ketch has its origins in 2003, in a design competition among a half-dozen naval architects given a detailed brief by the client. He had been inspired by Dijkstra’s 105 foot sloop Christoffel´s Lighthouse, launched in 2003. The design, modelled after 19th-century American pilot cutters and America.s Cup contenders, features a plumb bow, long bowsprit, traditional shear line with high bulwarks and beautifully sculpted stern. The ketch rig carries the maximum sail area practical, within the limits of a 62.5-metre “air draft” to clear the Bridge of the Americas on the Panama Canal´s Pacific side.

Among the “Panamax” ketch´s prime features are a light-ship displacement of just 210 tonnes; revolutionarydrive-train and power-generating systems; a lifting keel extending draught from 3.50 to 9.50 metres; and 40 tons of water ballast.

The Dijkstra and Partners and Reichel Pugh Yacht Design offices have inspired an exciting global trend with the revival of the classic plumb-bow concept, which, in this design, results in a hull form with seven metres more waterline and two knots more speed potential than a spoon- or clipper-bow design of comparable length on deck. The trend has clearly been adopted by other naval architects, who see the many advantages of the design beyond the grace of the profile and the power of the form.

Design Brief:
- The largest ketch which can cross the Panama Canal
- To perform well in inshore and offshore regattas. Pushing the envelope of yacht design and construction
- To provide safe and comfortable cruising, also in light ice conditions
- To have classic appearance above the water line - Interior: Light Weight Interior with foam and honey comb core, classic styled
- Systems: Revolutional drive train and power generating
- In General: Forefront of innovation, not just another large sailing yacht