Last year, whilst on charter in Turkey, I cruised passed an unknown yacht near Göcek. The yacht's name, Sureyya, did not appear in any of our files, and the design did not look familiar. After lengthy investigation, we now strongly believe the yacht is the former Bannenberg designed Acajou. 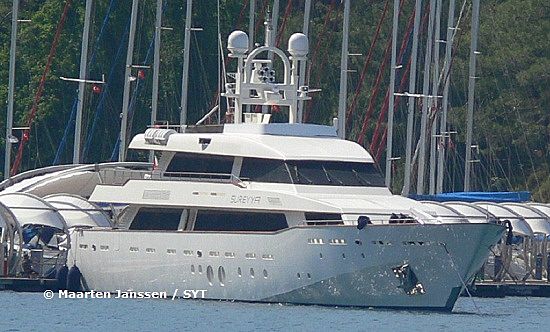 Acajou is a 43 metre Bannenberg designed superyacht, built in 1981 by the French yard Chantier de L'estérel. This superyacht was constructed from wood, and could reach speeds up to 30 knots. Acajou was badly damaged on February 15, 2005, during a heavy storm in Greece. Wind speeds up to 11 beaufort hammered the coast of Athens, and as a result, the breakwater at Marina Zeas collapsed. Several yachts in the port broke their moorings and drifted into each other. Soon after the incident, the heavily damaged Acajou disappeared of our radar, although we did learn that she was relocated to Turkey to be rebuilt.

Even though Sureyya shows very little resemblance to Acajou, it seems the yacht has been saved. She now features a completely new superstructure, and a new interior by Artistic Design, a conceptual and interior design firm from Istanbul.

If you have more information about this rebuilt project, or if you have more photos of the yacht from when she was Acajou, please contact us at [email protected].

UPDATE: We found an image of Acajou, that was taken during the storm that damaged her back in 2005.