The cities of Barcelona and New York, through the Fundació Navegació Oceànica Barcelona (FNOB) and the New York City Sports Commission, announced today a new transoceanic sailing event to take place in April 2010, the NY-BCN Transoceanic Sailing Record. Aimed at strengthening the sporting and cultural bonds between New York and Barcelona, this is the first transoceanic sailing race between the two cities. 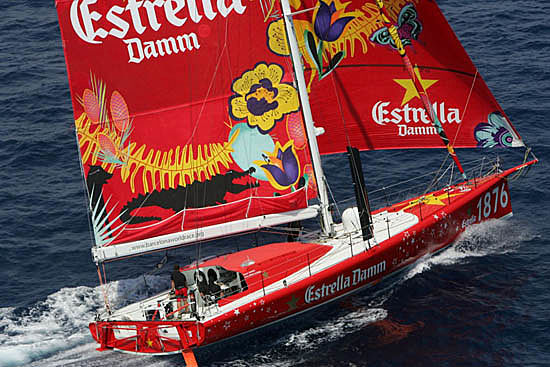 To ensure the transoceanic race is a competition between equals, the participants will be sailing two identical IMOCA Open 60 yachts, the Estrella Damm and the newly christened W Hotels. Crewed by three-man teams of one U.S. and two Spanish sailors per boat, the ships will depart New York City during the second week of April 2010, reaching Barcelona’s Port between the 20th and 30th of April. The competition is expected to last 18 to 22 days, covering a route of approximately 3,900 nautical miles (7,223 km).

Promoted and organized by the Fundació Navegació Oceànica Barcelona (FNOB), an entity that incorporates the Barcelona City Council, Barcelona Port Authority, Barcelona Chamber of Commerce and Barcelona Trade Fair, the NY-BCN Transoceanic Sailing Record is co-sponsored by the City of New York through its Sports Commission. Also collaborating in the event are the Royal Yacht Club of Barcelona and the New York Yacht Club.

The NY-BCN Transoceanic Sailing Record is designed to become a benchmark for transoceanic sailing. This is the first time in sailing history that an Atlantic and a Mediterranean city have decided to set a sailing record between them. This record will be ratified by the World Sailing Speed Record Council (WSSRC), an international organization established by the International Sailing Federation (ISAF), the governing body for the sport of sailing.

The FNOB initiative will be complemented by a full range of cultural and sporting activities, including a full educational program for primary and secondary students from Barcelona and New York, led by the FNOB and supported by the American School of Barcelona.

As part of the effort to educate the public about sailing, as well as the values and knowledge related to the ocean sailing and maritime culture, the entire competition will be covered online at the NY-BCN Transoceanic Sailing Record website.

This joint event with New York City continues Barcelona’s progress as an important strategic city in the world of ocean racing, and sets the stage for the FNOB’s second edition of the Barcelona World Race, a two-handed round-the-world race, organized in Spain and starting 31st December 2010.