While the largest superyachts tend to capture the headlines, it is the smaller yachts that are often more intriguing. This is largely because innovation is a key driver of brand awareness in the sub-500 GT sector, the biggest and most competitive portion of the superyacht market. The first 37-metre Benetti B.YOND due to launch at the end of the year is a prime example of this disruptive thinking in action. 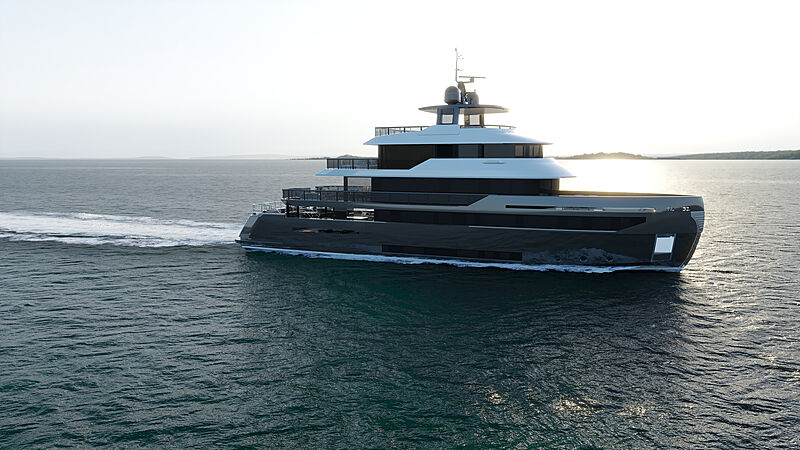 The design of the steel and aluminium B.YOND series began with an in-depth volumetric analysis in order to maximise the onboard volumes, circulation flow, guest privacy and overall utility. This led to a radical reassessment of conventional layouts and a general arrangement comprising four deck levels instead of the customary three seen on other yachts in her class. Add to the mix a wide beam of 8.6-metres and the result is a yacht of just under 400 GT in a standard configuration, but because it offers a high level of flexibility for a semi-custom design can be appreciably more. 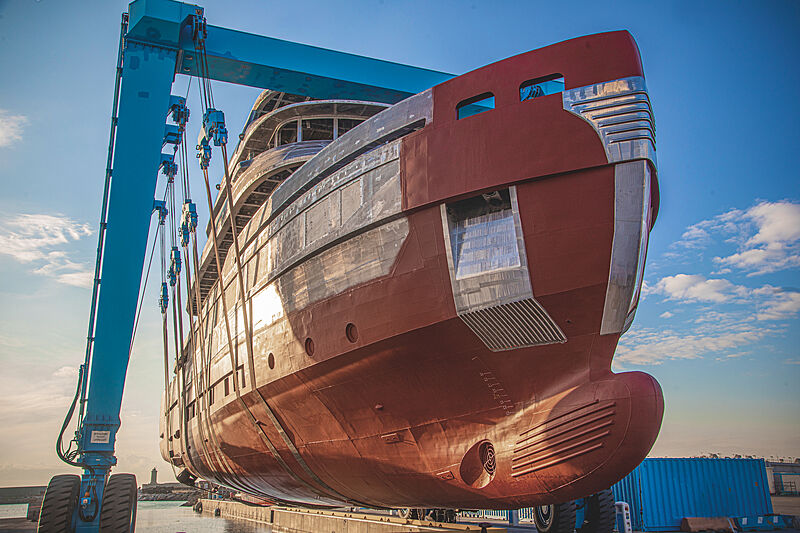 “Uniquely in her class, the crew quarters and services are all on the lower deck and the four guest suites, plus the full-beam master stateroom forward, are on main deck,” says B.YOND project manager Costanza Gnemmi as we step aboard the first unit in build at the Benetti shipyard in Livorno. “This means bigger windows, better views and more comfort because they’re further away from the engine room. There’s also the option of retractable terraces for the aft suites and master stateroom and the crew circulation is completely separate from the guest areas. You won’t find all these features together on any other yacht of this size.” 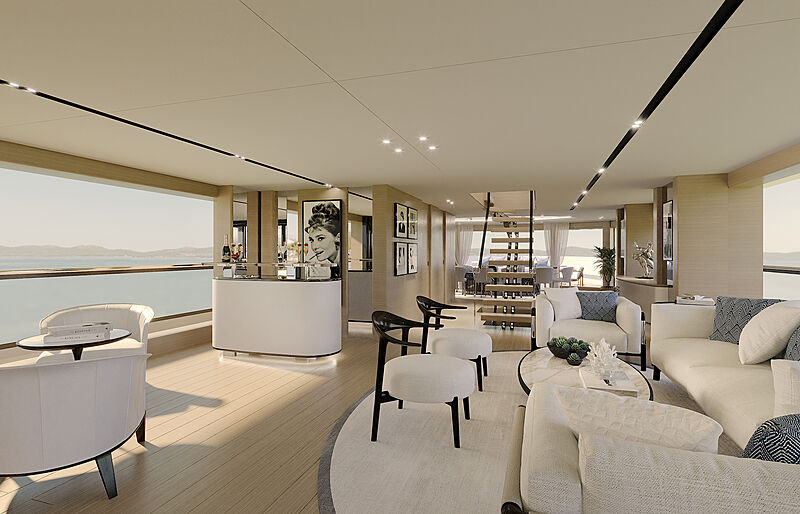 There is space on the lower deck for a good-size gym accessible from the guest staircase, but owners can choose to have a staff cabin or extra stateroom instead. Opposite the gym is a double captain’s cabin, although there is a smaller but perhaps more convenient single cabin behind the bridge that could alternatively serve as a ship’s office. In addition to a large galley (with a dumb waiter up to the sun deck) and dedicated laundry, there is even space for extra cold storage.

There are more options available on the bridge deck. The aft deck lounge has side glazing but the stern can be left open to create an informal veranda-style space, or enclosed with glass sliding doors as aboard the first hull. It can also be used as the master stateroom with a private aft deck. In this case, owners can decide to shift two guest cabins on main deck forward to replace the master stateroom and have a media lounge or playroom in the vacated space amidships. 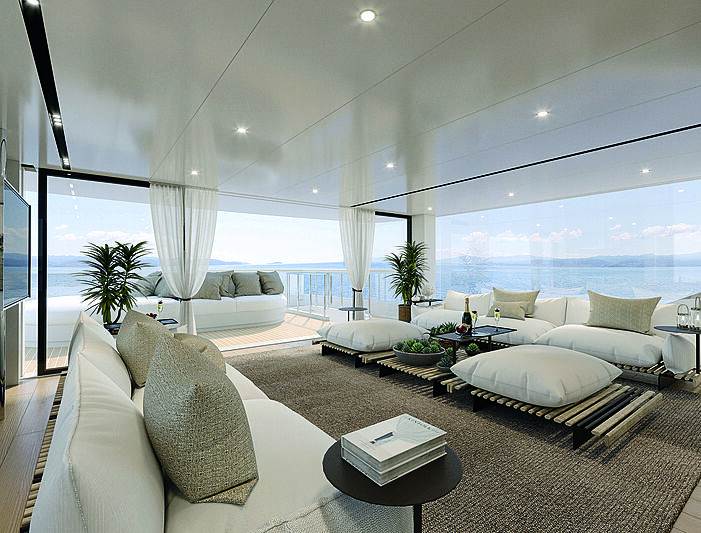 Another smart solution is the semi-open tender garage on main deck above the engine room with space for a 6.5-metre tender, a crew tender and other water toys. The beauty of this configuration is that it provides a much bigger garage than usual, frees up space in the transom for a beach club with a sauna, and still keeps the tenders out of sight. The bulwarks fold down during tender operations and as a semi-open space the garage is not included in the GT calculation.

As well as the division of the interior volumes, Benetti also looked closely at how best to move between them. Guests arriving by passerelle when moored stern-to take a short flight of steps up to the upper deck lounge, which becomes the main lounge area with a forward dining room. The crew, on the other hand, can take the steps down and through the open tender garage to deliver luggage to the guest staterooms and arrive at the service deck. 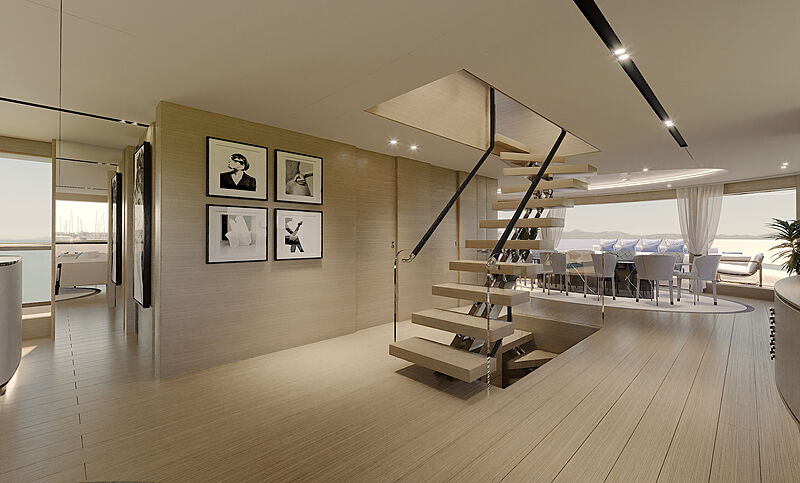 The B.YOND concept was initially conceived as a compact explorer and while the yacht certainly has the steel construction, tender space and autonomy of an ocean-going passagemaker, she does not readily fall into the typical explorer category. The robust exterior lines are by Stefano Righini, a long-term design partner of Azimut-Benetti. The four decks sit high in the water in relation to her overall length, but there is something reassuringly purposeful about her profile nonetheless. 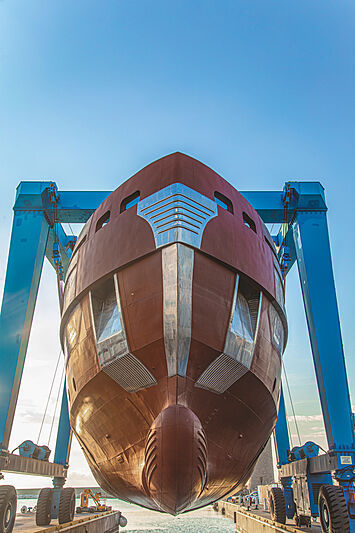 Azimut-Benetti president Paolo Vitelli has been closely involved in the B.YOND project from the beginning. Benetti was one of the first shipyards to build yachts over 30 metres in fibreglass and in a way the B.YOND’s metal construction marks a return to more traditional boatbuilding methods. But in almost every other sense it represents a break with convention, including a Selective Catalytic Reduction (SCR) system for reducing NOx emissions and the option of a hybrid propulsion package by Siemens.

“Eco-friendliness is a vital consideration and will only become more important,” said Vitelli in a 2018 interview for SuperYacht Times. “I cruise the Med each summer and I must say that some of our beautiful coastline is not as pristine as it should be. The industry has a role to play in conserving the marine environment for future generations, and by eco-friendly I don’t just mean fewer emissions, but also more efficient yachts that consume less fuel.” 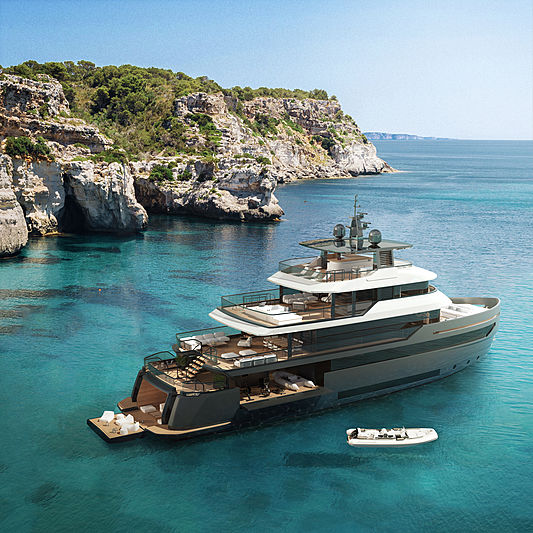 Photo: Benetti SpAThe B.YOND is a relatively small superyacht that makes a big statement about the future direction of yacht design. Flexibility, efficiency and sustainability rank alongside comfort, reliability and performance in the priorities of today’s owners and Benetti has made sure it ticks all the right boxes.

This article was originally published in the Fall 2021 issue of the SuperYacht Times newspaper. To receive all future issues straight to your door, subscribe to the newspaper here.