Bloemsma & van Breemen has announced the signing of a contract to build a 41-metre (134’) sailing yacht. The Dutch yard will create this fast cruising sloop to a blueprint from Dubois Design Naval Architects. And the result is sure to be spectacular: Bloemsma & van Breemen’s most recent launch, the 48-metre (158’) Flying Eagle, was recently nominated for the World Superyacht Awards in Venice. 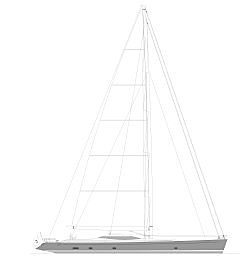 The new order will be a high performance yacht built entirely in aluminium and equipped with dual headstays. Roll-away boom with captive winches for all sail handling systems and hydraulically operated running backstays. She will have a low profile deckhouse, a relatively high beam of 8.9 metres and a draught of 4.15 metres.

The dark mahogany wood interior will feature a large salon, a master stateroom with walk-in closets, two double guest cabins and one twin guest cabin. In addition to the eight guests onboard, the spacious layout provides for good accommodation for six crew members, including separate dining facilities and a dedicated laundry.

Built to both Lloyds Register classification and the MCA large yacht code, this spectacular new sailing yacht will have two tenders. One will be located on the foredeck and the other in the aft peak, launched by a dedicated hydraulic crane housed in the deck locker.

Meanwhile, Bloemsma & van Breemen is set to launch a 27.43-metre 90’ classic from the boards of De Vries Lentsch Design. A very special boat, Griffioen is set to kick-start a revival of the classic Cammenga series.
Advertisement