BMT Nigel Gee, a subsidiary of the BMT Group, has recently announced its latest design, developed in partnership with Claydon Reeves. With her state-of-the-art Extreme Semi-SWATH (XSS) hullform, Oxygen redefines the explorer yacht genre, offering outstanding speed and seakeeping performance with the luxury and facilities of a true superyacht. 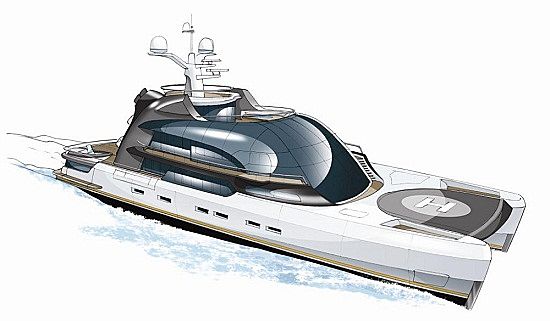 Equipped for all manner of pursuits, Oxygen’s primary role is a dive-explorer yacht carrying not only extensive diving equipment but also her own submarine, launched from an innovative stern lift that doubles as an adjustable swim platform. Measuring 55 metres in length, and powered by four MTU 2000 series diesel engines driving a pair of controllable pitch propellers, the yacht can comfortably reach speeds of up to 24 knots. While her low draught allows access to shallow, inshore locations, a ride control system consisting of active T-foils and interceptors ensures a smooth ride even in the most demanding offshore sea conditions.

True SWATH vessels demonstrate by far the lowest motions in rough seas, but at the expense of very high powering requirements and high running costs in comparison to more fuel efficient, conventional catamaran hullforms. BMT Nigel Gee has previously developed a Semi-SWATH hullform for the US Navy offering significantly lower motions than those of a conventional catamaran, yet with a minimal increase in powering. The XSS goes one step further in maximising the seakeeping performance of high-speed catamarans, effectively closing the gap between SWATH and Semi-SWATH technology. 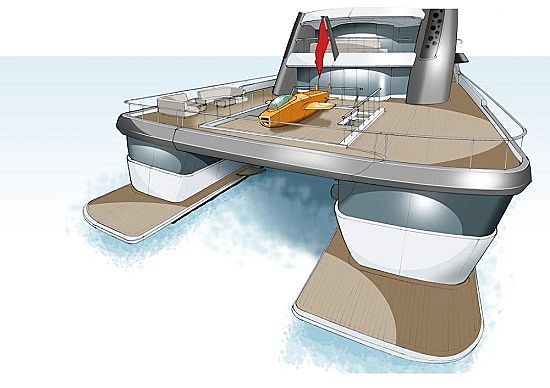 Rob Sime, Senior Naval Architect at BMT Nigel Gee explains: “BMT’s proven XSS hullform offers seakeeping performance approaching that of a traditional SWATH vessel, but with powering and fuel consumption levels comparable to catamarans of more conventional form. The XSS hullform has already been adopted for demanding applications in the offshore energy industry, and is equally well-suited to explorer yacht applications where Owners may not want their enjoyment to be interrupted by the prevailing sea conditions.” 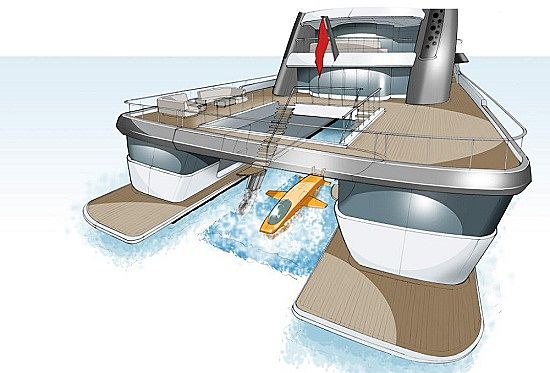 Claydon Reeves approached the design with a clean sheet of paper. “We were delighted when BMT Nigel Gee asked us to assist them in creating a luxury vessel on their XSS hull platform.” says James Claydon. “The extreme beam available only on a catamaran allowed us to set aside conventional motor yacht design principles and instead create a totally original exterior, clothing a practical yet intuitive internal arrangement.”

Oxygen’s exterior has been designed with a fully glazed appearance, promising masses of internal light and spectacular views out. The flush-sided, single volume deckhouse stands apart from conventional stepped and tiered superstructures.

Internally, guest accommodation is spread over three decks with the Owner enjoying forward views on the main deck with a private terrace. Aft on the main deck, Dive HQ provides changing facilities for the day’s underwater activities and permits direct access to the water once the stern lift is deployed. The main saloon and dining room are situated on the bridge deck above, along with the VIP cabin, Captain’s cabin and senior crew accommodation. The remaining crew cabins are located on the lower decks. 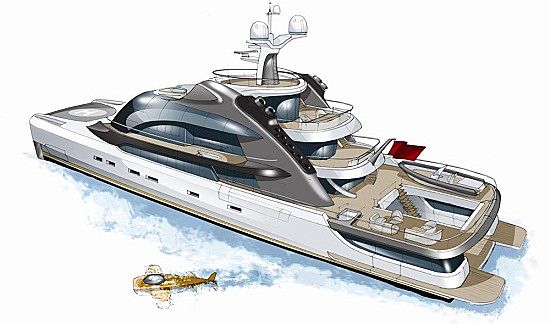 Aft, a large dive store with decompression chamber and service area are located in the port side lazarette with the crew tender to starboard. Above deck, an eight metre tender and five metre submarine rest whilst the fore deck helipad adds further exploration options for guests.

Rob Sime concludes: “BMT Nigel Gee is renowned for developing innovative hull designs allowing Owners to maximise the operability and enjoyment of their vessels. The unique features of the XSS hullform make it an ideal platform for a futuristic dive-explorer yacht, not only for the speed and seakeeping performance that it can offer, but also for the creative deck arrangements possible only with a catamaran. Our pioneering approach and unrivalled engineering experience allow us to work closely with free-thinking designers like Claydon Reeves, leading the market into the next generation of naval architecture and yacht design.”