BMT Nigel Gee, a subsidiary of the BMT Group, has announced its latest design, developed in partnership with Yacht Island Design. Project Utopia, an avant‐garde vision of a future concept breaks the traditional naval architectural mould which the market has come to expect and offers a truly unique outlook free from any conventional design constraints. 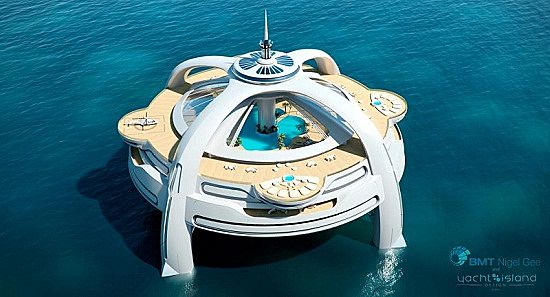 James Roy, Yacht Design Director at BMT Nigel Gee explains: “Visions of the future are often constrained by familiarity with the present or reflection on the past. Much is made in today’s design community of starting with a blank sheet of paper yet many, if not all yacht concepts revert back to the traditional form - the perception that a yacht should be a form of transport becomes an immediate constraint. Utopia is not an object to travel in, it is a place to be, an island established for anyone who has the vision to create such a place.”

Measuring 100 metres in length and breadth, and spanning over 11 decks with the equivalent volume of a present‐day cruise liner, there is enough space to create an entire micronation. The design is based on a four legged platform employing the same principals of any small waterplane area design for minimum motions in even the most extreme sea conditions. Each leg supports a fully azimuthing thruster and with four such units, the design can redeploy between desired locations at slow speeds. A large central structure bisects the water surface acting as the conduit for the mooring system which is a critical element of the design, as well as housing a wet dock for access by tenders. In addition to tender access the design features multiple helicopter pads.

The main accommodation and service spaces span some 11 decks with the uppermost deck covered by a retractable canopy. On the “13th Floor” there is an observatory with 360 degree views, at which point the occupants would be 65m above the water surface.

James Roy concludes: “Pioneering design ideas such as Utopia are exactly the types of projects that our team excel in. Our forward thinking approach and unrivalled state of the art engineering experience allows us to work closely with designers, stylists and shipyards, to bring these ideas to life and lead the market into the next generation of naval architecture.”