"It’s crazy how life works,” Bobby Genovese, chairman of BG Capital Group and owner of the 46.88-metre superyacht BG Charade, tells us over a crackly phone connection in June. “I’m a Canadian farm boy. I spent my summers in an area called Muskoka in Ontario, Canada, on the lakes. One of the great traditions there is collecting these old wooden boats that are family time-pieces. One day, my brother and I were at the marina and there was one of the most beautiful boats I’ve ever seen: Miss Canada III [a former World Championship racing boat]. I thought, ‘I gotta buy that’ and that’s how I came to start owning boats.” 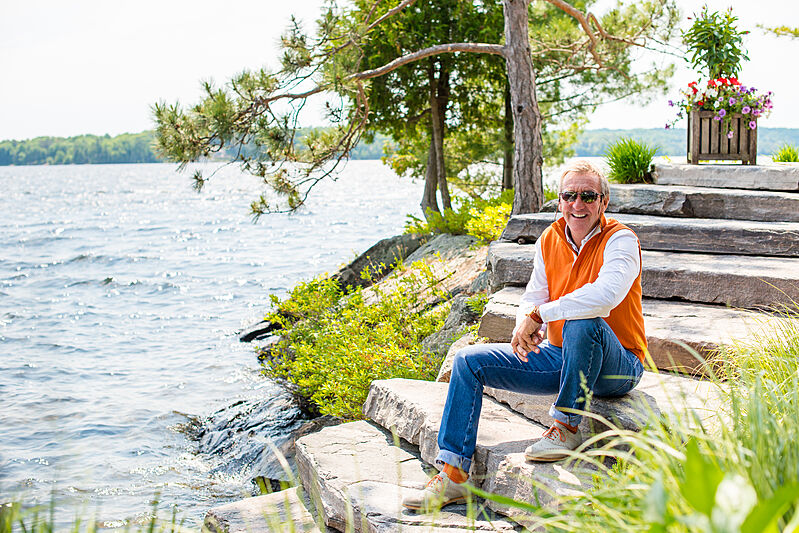 Bobby Genovese has many stories to share. Having left school with no qualifications at 16 years old, he’d already realised the power of good salesmanship from selling wildflowers from a roadside kiosk with his stepfather in Toronto. He would go on to put these skills to use again when, aged 25, he established his first company, the Investor Relations Group, which made him a millionaire within a few years. Having previously described this experience akin to having “Monopoly money that didn’t feel real”, the capital did enable him to indulge his growing love of unique boats. 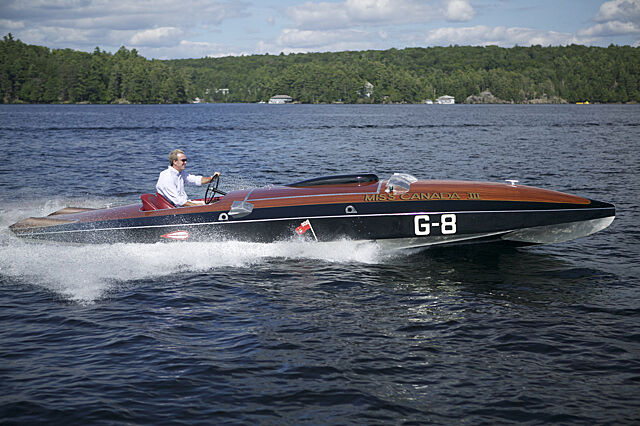 “Whenever I was out on the lake, everyone would say ‘We just love Miss Canada III, it’s a shame you don’t have Miss Canada IV’, and I was thinking, ‘What the hell’s Miss Canada IV?!’,’’  Genovese laughs. “I found out that Miss Canada IV was built in 1948 and was believed to have been the first boat in the world to go 200 miles an hour. It was actually powered by one of your [the UK’s] Royal Air Force Spitfire engines. I had to have that boat! But,” he sighs, “she was in a museum.” 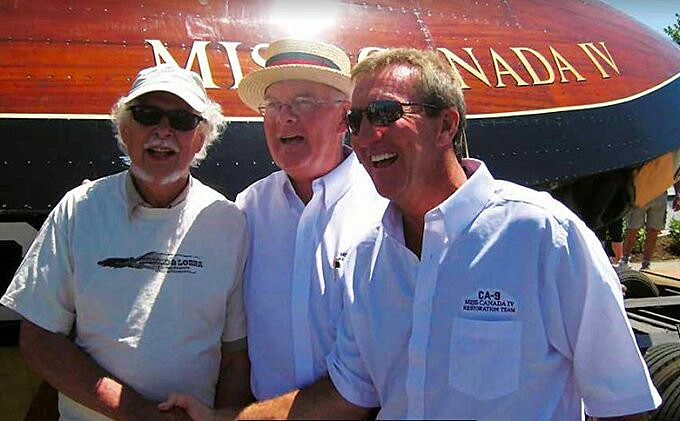 The fact Genovese managed to wangle a vintage racing boat out of the Ingersoll Museum in Ontario, get her back to her best and race her around the world will come as no surprise to those who know him. His bonhomie and unwillingness to take no for an answer has seen him convince more than one owner to let him buy their prized vessel – indeed, it’s also how he came to own the 1990-built BG Charade in 2014: “I said to the owner, ‘What do you need three boats for? Why don’t you let me have her?’ and he said yes! I thought, ‘Oh my God, now I’ve got to figure out how to pay for it!’” 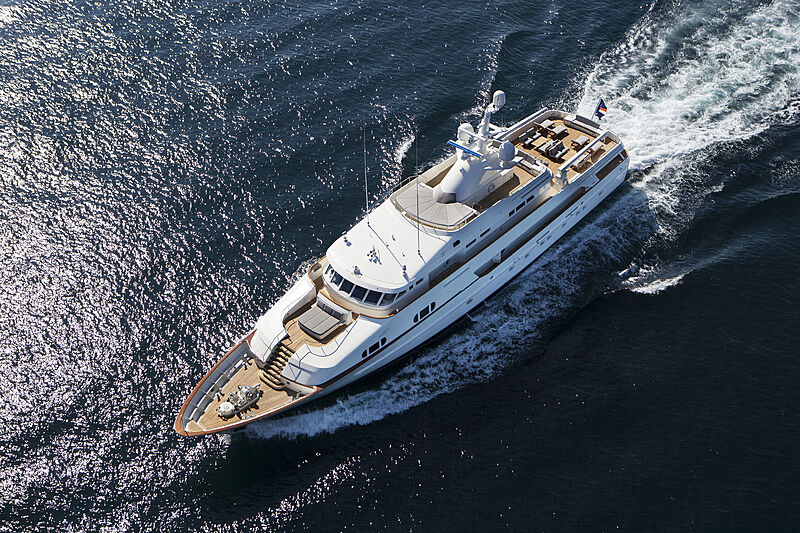 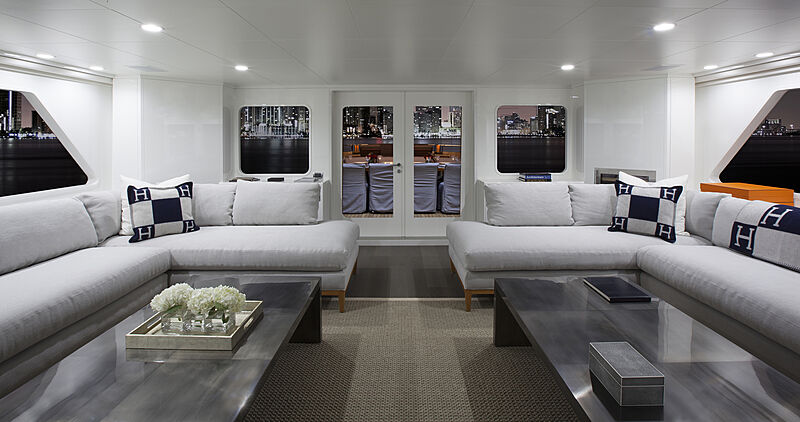 Photo: Bobby Genovese
Figure it out he did, and BG Charade subsequently underwent a two-year complete refit at Derecktor Shipyards near Ft. Lauderdale. “One of the main things I learned from doing a refit is don’t do one – buy it done!” he laughs. “It was supposed to cost $2 million, which was just to upholster the furniture and fix a couple of blistering spots." 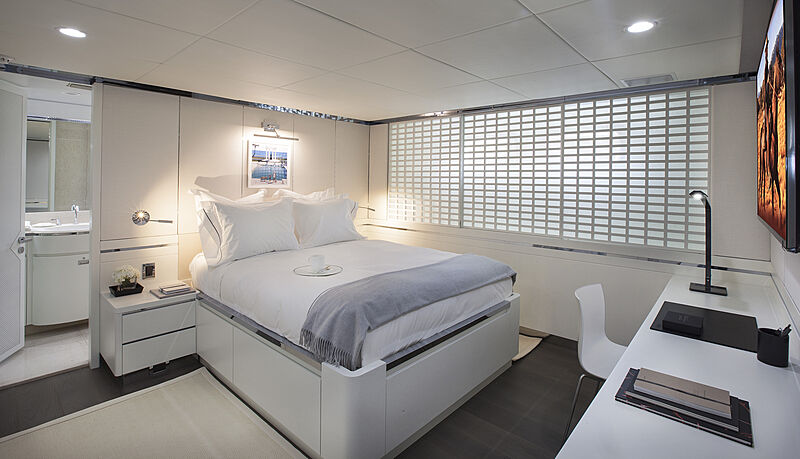 Photo: Bobby GenoveseHe continues, "But then I said, ‘Why don’t we change out the air-conditioning system for quieter fans?’, and then ‘why don’t we move the jacuzzi?’ and so on. We’re now at close to $9 million! But having everything looking fantastic is one of my selfish pleasures and of course we have every toy on board you could possibly imagine.” He’s not exaggerating. Entertainment for guests includes a massive starboard-mounted climbing wall, a water slide, a water trampoline, Seabobs, paddle boards, kayaks and a fleet of Waverunners. 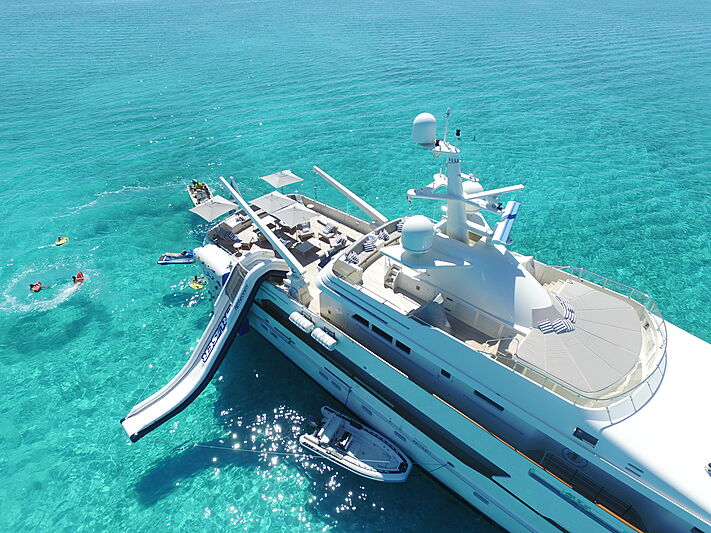 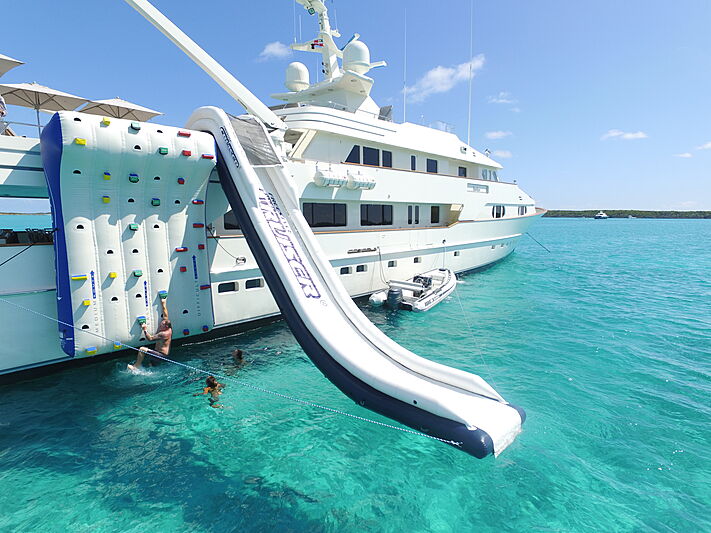 Photo: Bobby GenoveseHe made sure to test out all his new gizmos and gadgets in person, taking a trip with family and friends last summer through the Mediterranean. Spending time on board his boats isn’t unusual. Indeed, it’s a deliberate life decision made after finding himself too caught up in work (and therefore on land). “I was one of those people who barely ever get to enjoy their boats,” he tells us. “I thought, ‘What am I doing? I’ve really got to start using these things!’” 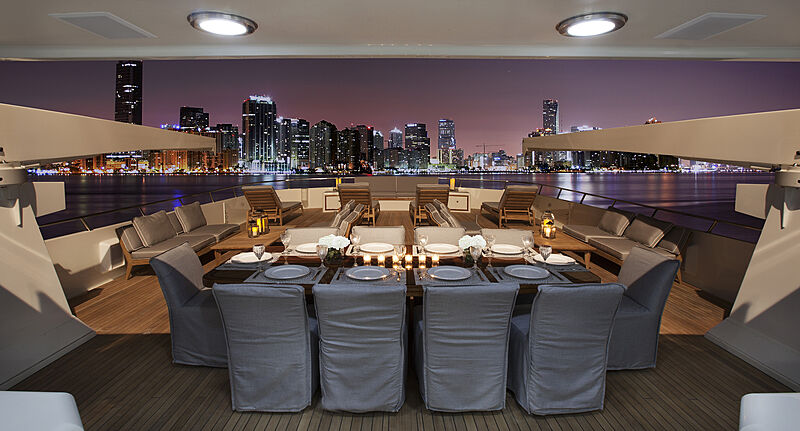 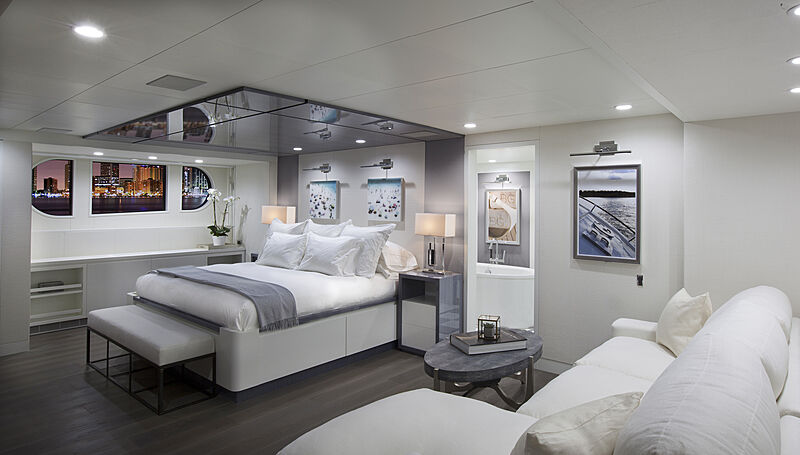 Photo: Bobby GenoveseConversation inevitably turns to Covid-19 and the effect it’s had on Genovese’s businesses and life in general. He describes how professionally the impact has been mixed. Positives include having purchased 50 percent of a business in January that helps people with credit card or financial problems – fortuitous timing considering the state of the world’s finances. However, he’s also the master concessionaire for four of the seven largest state parks in the state of Florida, which were closed down when lockdown measures began. It was tough on his employees, but things are slowly returning to normal as restrictions have eased. 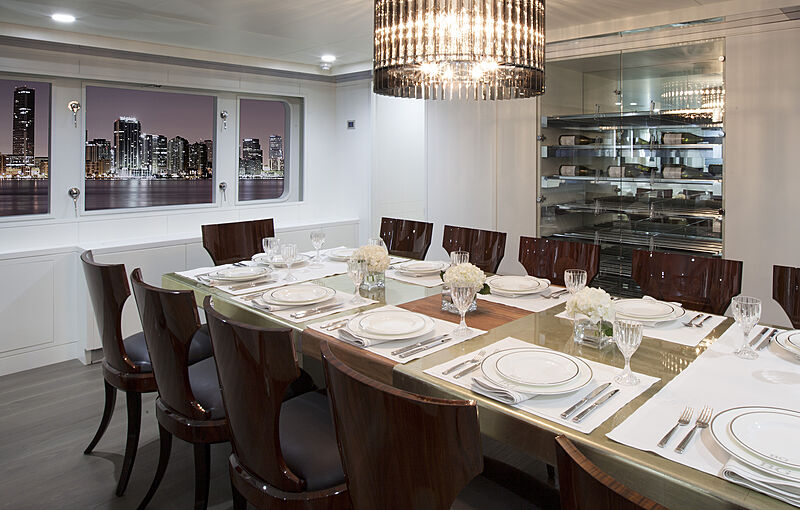 Photo: Bobby Genovese"Life on the sea with the people you love is definitely a goal Genovese has taken to heart as he reveals he’s currently in the process of purchasing another boat: “My goal is to have one boat here in North America and leave BG Charade between the South Pacific and Mediterranean so I can go back and forth and basically live between the two boats.” 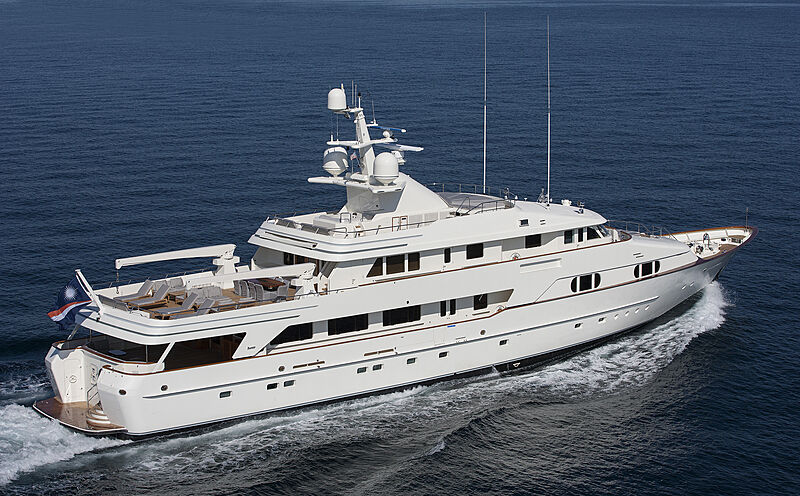 Photo: Bobby GenoveseSounds like a great plan to us. As we’re rounding up our chat we ask if there’s anything else he’d like to mention. “Has anybody told you that I look a lot like Brad Pitt?” he wonders, “If you want to put that in your article, that would be amazing.” Consider it done. 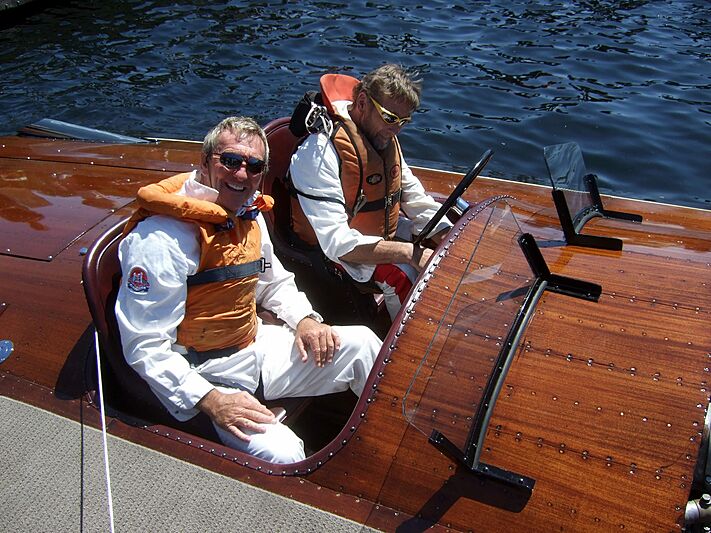 This is a shortened version of an article in the latest edition of the The SuperYacht Times newspaper. To see the full version and to receive all future issues straight to your door, subscribe to the newspaper here.

Special eco-edition of The SuperYacht Times newspaper out now

8 July 2020 10:15
Business
We are delighted to announce that the eco-edition of The SuperYacht Times is out now. As fans of yachting and sailing, our readers are, by default, admirers of the oce...

17 March 2020 15:00
Ownership
When it comes to making the most out of life, there are a certain number of people who we can all agree have cracked the formula. Whether that’s through managing to ac...

Homeward bound: Brian O’Sullivan on the wonders of British Columbia

15 October 2019 12:00
Travel Ownership
“When people ask, of all the places you’ve been in the world, where was your favourite? I might say how much I loved the South Pacific, the Caribbean and Montenegro ar...

20 October 2020 10:00
Market
The 26.84-metre motor yacht Bel Sogno has been sold thanks to Frank Grzeszczak Jr. of IYC representing the buyer and Drew Offerdahl of Denison Yachting representing th...

Visualise your Engine Room in 3D with YachtEye

16 July 2020 14:30
Business
As a platform, YachtEye was born out of superyacht owners’ desire to visualise data and information about their yachts in an interactive way. When SuperYacht Times too...

19 October 2020 08:30
Fleet Business
Here we closely follow all developments regarding the coronavirus Covid-19 pandemic in relation to the superyacht industry and bring you the latest updates. If you hav...