Day 1 saw challenging conditions for both fleets with 15-20 knot wind accompanied by choppy seas and low cloud. As Wednesday dawned the mist cleared but the difficulty now was to be much lighter and changeable winds. The start was delayed by half an hour whilst the much lighter winds settled on a direction and picked up to a decent 10 knots gusting to 15. In summary Unfurled took both line honours and the winner of Day 2 in the Class 2 fleet. Class 3 line honours and corrected time saw Firebrand take pole. Both these yachts now lead their classes after two races, but with both fleets performing so well it's still wide open for today and Saturday. 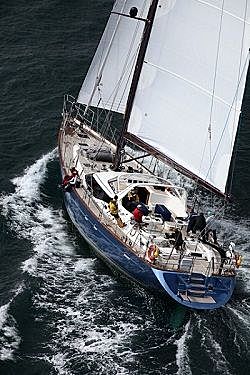 Mariette of 1915 had an allocated start time of 12:00 for Class 2 and was spot on the mark for her start, but the rest of the fleet were hot on her heels most boats favouring the calmer seas of Day 2. As the breeze picked up to 17 knots Mariette rounded the first mark. Adela followed closely, escorted by her sister ship A2 leaving Falmouth today on her maiden voyage following her 16 month refit at Pendennis. Velacarina was chased around the mark by Mariquita and then Bequia before Bare Necessities, seeing a repeat of yesterday’s groupings. Breakaway followed but it was Velacarina that noticeably picked up speed on the downwind leg, creating a fantastic sight as her yellow spinnaker blazed in the fleet. All the kites were flying on this leg, showing the yachts off in all their glory, the modern yachts providing stark contrast to the beauty of the classics with Mariquita looking particularly striking.

As the Class 2 Pendennis Cup fleet rounded the next mark Unfurled showed her speed on the first upwind leg as she took Adela, while Mariette and Breakaway still remained close. The rest of the fleet followed the battle, with Mariquita rounding before Bare Necessities and then Athos. The race remained tight to the next mark as Mariette made impressive progress on the upwind leg, manoeuvring just inside Unfurled at the mark emerging as the leader.

Breakaway also made a fantastic sprint to this mark, tucking inside Adela to take third place at this point, providing the spectator boats with a fascinating insight into race tactics. The leading group were followed by Bequia, with Athos bearing down in sixth place followed by Velacarina and then Bare Necessities.

The race tacticians came into play, with Breakaway and Mariette tacking closer to shore along the beat following the coastal breeze which can be hugely beneficial along this shore. Unfurled and Adela elected to move further offshore, providing a tense period waiting to see which course saw the advantage. 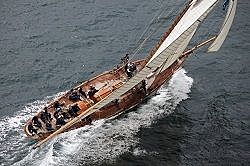 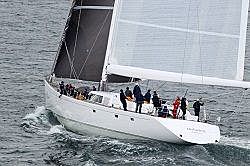 As the fleet moved towards the finish the groupings remained close. Unfurled sustained her lead until the end, proving she is a force to be reckoned with through the rest of the week. She maintained a 4 minute lead over Adela. Adela and Athos had another close finish today with the two giants of the fleet passing the committee boat less than 4 minutes apart. Breakaway is proving a surprise in the class performing well both days, with a third place today on corrected time just ahead of Mariette, showcasing her downwind potential.

The Class 3 racing was just as exciting, with a closely match fleet performing well, and the crews certainly enjoying the dryer sail today! The skipper of Mikado gave us the race-side perspective on the Little Dennis Fleet race. As he explained “It took us a while to decide the best rig for the start due to the much lighter winds today. Eventually we settled on a full cutter rig and at the gun had a great start, crossing the line at the pin end ahead of Pinuccia and the rest of the fleet. It was interesting watching race tactics as the yachts took varying lines along the first beat. Tomahawk tacked inshore following the coastal breezes, whilst Firebrand moved further offshore and she certainly picked up a worrying pace. Mikado and Pinuccia took the more direct race line along the beat and we had a great battle to the first mark, crossing several times along the way. Pinuccia cleverly gained the advantage as she darted inside just as we reached the first mark. Then as all yachts in the Little Dennis Fleet rounded the first mark spinnakers were sent flying. 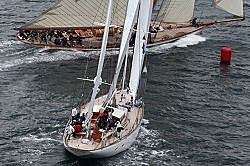 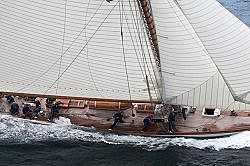 The race remained tightly fought but we had a much rougher beat back to the Porthallow mark, with Firebrand moving ahead. The fleet enjoyed a spinnaker reach, jibbing round the Rosemullion mark towards the final Old Wall buoy. It was a close race between Mikado and Pinuccia throughout the course, with Firebrand and Tomahawk battling in front. As Mikado and Pinuccia rounded the final mark we could see the leading pair crossing the finish line, with our yachts following about 10 minutes behind. The battle was reflected in the finishing times, with Firebrand and Tomahawk crossing the line less than a minute apart and our racing pair crossing the gun 16 seconds apart. Firebrand performed especially well today, especially upwind and the corrected times see the fleet placed very closely.”

Very light winds of 5-8 knots are forecast for the race today, which are favourable to Mikado’s cutter rig and low freeboard so it will be interesting to watch the Class 3 performance on Day 3.